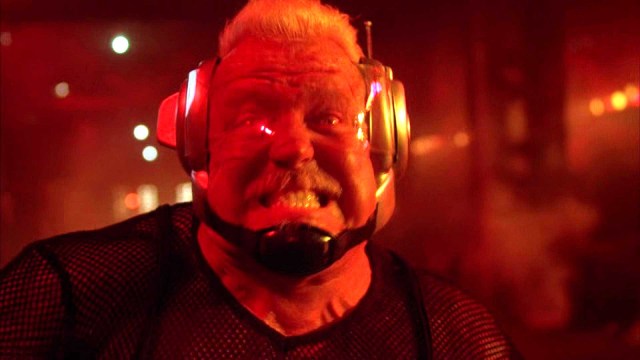 A Stephen King short story written under a pseudonym being adapted into an Arnold Schwarzenegger action movie directed by the star of Starsky & Hutch, which is currently in the process of being reinvented and remade by Edgar Wright, is an interesting history to say the least, but The Running Man is a fittingly interesting slice of 1980s escapism, so it sort of makes sense.

It might not rank among the top tier of Arnold actioners, but a 67 percent Rotten Tomatoes score and 60 percent user rating shows that the dystopian thriller retains plenty of support. Like all of the Austrian icon’s best efforts, The Running Man also features a barrage of phenomenally cheesy one-liners, which neatly sums up the overall vibe of the film itself.

Clad in a blinding yellow jumpsuit, Schwarzenegger’s Ben Richards is framed for a crime he didn’t commit and forced to compete in the titular game show, where convicts are hunted for sport by a cabal of garishly-dressed characters that boast such names as Fireball, Captain Freedom, Dynamo, Buzzsaw, and Subzero, who ends up becoming plain zero.

It might be 35 years old, but the fun-filled camp favorite has made an unexpected splash on streaming, with iTunes customers propelling Arnie’s fever dream to a Top 10 spot in the United Kingdom, as per FlixPatrol.

Set in the far-flung and distant future of 2019, The Running Man might be heightened fantasy and delightfully over-the-top on every level, but it turned out to be prescient on a couple of counts, especially in predicting the global reality TV obsession that rose to prominence in the 21st Century.