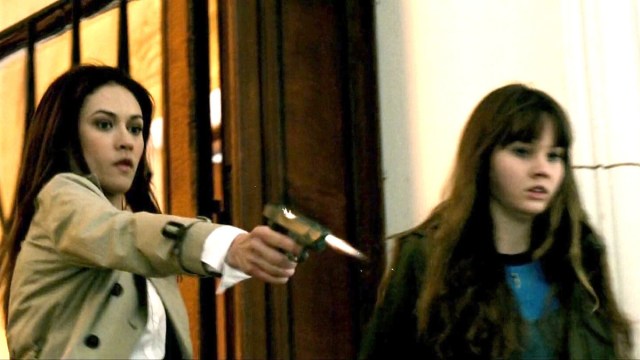 We’ve all focused so much energy on watching the likes of Bruce Willis, Nicolas Cage, John Travolta, John Cusack, and Mel Gibson descend into the depths of the VOD action thriller, that not a lot of people have noticed Aaron Eckhart doing the exact same thing for just as long.

In the last decade , The Dark Knight star has lent his undoubted talents and chiseled jaw to such luminaries as Erased (also known as The Expatriate), Line of Duty, Wander, and Afterward, with Rumble Through the Dark and The Bricklayer both in various stages of production. It’s the former that’s been catching the eye on streaming this week, though, a full 10 years after first bringing 104 minutes of tedious would-be entertainment to the masses.

The setup is at least enough to spark a modicum of interest, with Eckhart’s single father and former CIA agent relocating from New York to Belgium to work for a tech company that seems very shady in almost every way. Sure enough, once he stumbles upon an encrypted security code, his new employers erase all of his records from existence, before setting their sights on his physical form.

Along the way, our protagonist’s ex-lover and current CIA operative (as played by Olga Kurylenko) coincidentally gets involved in the manhunt, along with the local authorities and hired assassins. As you may have guessed, time is running out for Eckhart’s Ben Logan to prove his innocence and expose the perpetrators before he winds up dead.

A boilerplate mid budget thriller to a tee, Erased was treated as such with 28 percent and 35 percent critical and user scores on Rotten Tomatoes. And yet, it’s been a surprising smash on streaming this week, having found unexpected joy on the iTunes charts, per FlixPatrol. One for the diehard fans of the genre, then, but not many else.