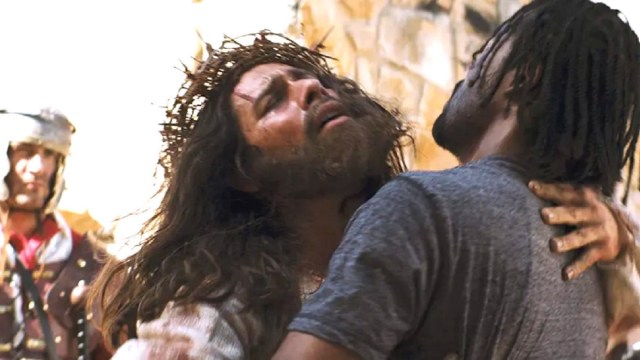 Time travel movies always open themselves up for criticism when it comes to the mechanics of visiting the past, but Black Easter (also known as the equally hilarious Assassin 33AD) offers you no other choice but to throw caution to the wind and go along for the ride, because it comes packing one of the most utterly demented, preposterous, and therefore wondrous high concept pitches you’ll ever hear.

If you haven’t heard of writer and director Jim Carroll’s ambitiously unhinged effort, then what if we were to tell you that the crux of the plot involves terrorists using the time travel technology pioneered by the world’s top scientists to prevent the resurrection by heading back into ancient history to assassinate Jesus Christ? Because that’s exactly what happens.

That’s right; the temporal tampering plunges the modern world into a state of unrest and apocalypse, forcing two unlikely allies (one who never had any faith, and another who lost his) to save the life of Christianity’s figurehead by thwarting the rogue band of extremists from completing their goal. It sounds nuts, it is nuts, and Black Easter has also become an unseasonal smash hit on streaming.

As per FlixPatrol, the surprisingly well-received B-tier bout of sensationalized sci-fi shenanigans has landed a spot on the Prime Video global watch-list, even though it’s very easy to imagine a lot of people getting upset if not outright offended once they discover what it is the film is actually about.

Oh, and to add a cherry on the icing on top of the cake, Heidi Montag of all people also makes an appearance, because it simply wasn’t crazy enough already.