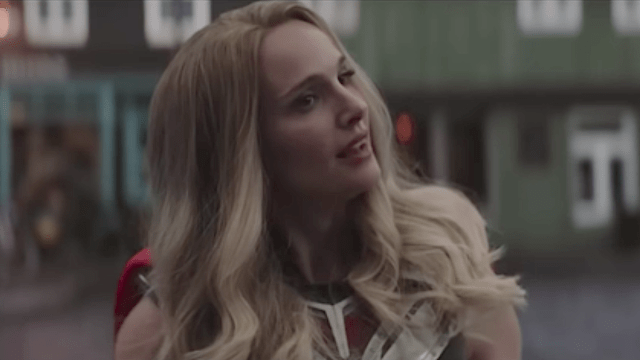 After watching Thor: Love and Thunder, MCU fans are almost convinced that whosoever holds Mjolnir, if they be worthy, shall possess the hair of Thor.

Marvel superheroes have always looked amazing on camera, in large part thanks to the training regimens they undergo before every movie. Having a superbod is a staple of the genre, after all, and one doesn’t simply go about saving people’s lives and not looking like a Greek god or goddess come to life again on Earth.

In the case of Chris Hemsworth’s Thor, that statement is doubly true, since the God of Thunder is, well… literally a god. Barring his traumatized streak in Avengers: Endgame, the thunderlord has always been a sight to behold, and not just because he’s as jacked as a human could perceivably be, but due to his very flowing blonde hair, a trait he gets back in Love and Thunder.

And apparently, he needn’t be the only one. As MCU fans have just pointed out, Jane Foster’s hair literally turns blonde after Mjolnir picks her to become the Mighty Thor, implying that one of Thor’s many powers is a great head of golden hair.

Mjolnir certainly has its priorities straight. Never mind lightning or inhuman physical power and endurance; let’s talk about the hair.

Fans are also remembering one instance in Endgame where the lightning braided Thor’s bear before the final fight against Thanos. Coincidence? We think not.

Now, I know what you’re thinking. Captain America didn’t suddenly become blonde after picking up Mjolnir, so what gives? Well, you have to remember that Steve’s hair was concealed inside his helmet, so there’s no way we could verify if it didn’t change color in those brief moments.

Never underestimate Jonathan, guys. If you know, you know.

Those Thor L’Oréal memes suddenly make a lot of sense.