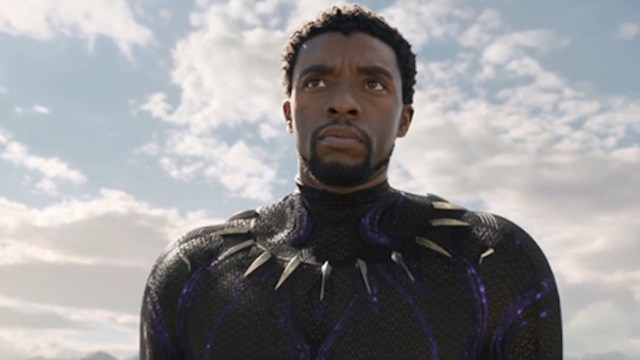 The phenomenon that Black Panther became after its 2018 release quickly turned the film into one of the most important superhero movies ever made. Four years after the first movie hit theaters, fans are preparing for the sequel, Wakanda Forever, which will honor the legacy of Chadwick Boseman, the actor behind the titular role in that first film. What better way to prep for that sequel than to relive some of the best moments from the first installment? These are the moments that truly knocked our socks off in the first Black Panther.

The introduction to Wakanda

The first time we see the technologically advanced, albeit fictional, African nation of Wakanda is one to remember. The designers behind Wakanda make the country look as bountiful as it should, and it’s just our first glimpse of the wonders of a nation that has been completely hidden away from the rest of the world. The moment is also a brilliant piece of filmmaking, as we get a fuller understanding of what director Ryan Coogler and cinematographer Rachel Morrison have in store for us.

As T’Challa ascends to the throne, he must first fend off challenges from anyone in Wakanda who wants to test his strength. In this first challenge sequence, we see T’Challa square off against M’Baku (Winston Duke) and almost lose his inheritance. The fight itself is plenty thrilling, but what’s ultimately more important here are the cultural details that surround the battle. The chanting, the images of the various tribes that compose Wakanda, and the scenic waterfall backdrop instantly make the sequence an all-timer. Add the brilliant score, and the scene feels both thrilling and culturally specific.

Killmonger is one of the great villains of the Marvel universe, and it’s thanks in large part to Michael B. Jordan’s performance in the role. When we first meet him, he’s working with Ulysses Klaue (Andy Serkis) to rob a British museum that has, through centuries of colonialism, acquired a number of artifacts that should rightly belong to Africa. The precision of Jordan’s performance, and the anger that’s seeping just below the surface, immediately give us a sense that Killmonger is much more than just an average villain. He’s someone who has real beliefs, even if the means by which he wants to achieve them are morally questionable.

This is a smaller moment, admittedly, but Okoye (Danai Gurira) is clearly struggling with her wig throughout the sequence in South Korea, where T’Challa, Okoye, and Nakia (Lupita Nyong’o) have traveled to track down Klaue. She wears a wig as part of her disguise, but the moment a fight breaks out and she tosses the wig at an opponent, is a highlight. What amounts to a throwaway gag also speaks to her total disinterest in anything traditionally western.

Letitia Wright is a consistent highlight in Black Panther because of her ability to effortlessly roast pretty much everybody, but she never gets off a better burn than the moment when she calls Everett Ross (Martin Freeman) a colonizer. It’s a roast that happens to be true, and it’s also a smart way to call attention to the fact that Ross is the only white man of any substance in the movie who is not pure evil. He even manages to be a little bit helpful in the end.

Killmonger challenges T’Challa for the throne

The first challenge fight is thrilling, but it’s got nothing on the battle between Killmonger and T’Challa for the throne. We know that Killmonger is going to be a tough opponent, but it becomes clear almost immediately that T’Challa is outmatched. He gets beaten in pretty brutal fashion, and Killmonger even starts to monologue before the fight is really over. When T’Challa gets sent over the edge of that waterfall, it seems like he’s really gone, and Killmonger will be crowned the new king. It’s the lowest moment of the movie, but one that is nonetheless thrilling.

Killmonger takes the throne for the first time

Coogler is a virtuosic filmmaker, and that virtuosity is never better on display than in the sequence where Killmonger ascends to the throne after defeating T’Challa. The camera spins 180 degrees after initially showing him approach the throne upside down, immediately suggesting that Killmonger’s ascendance has turned the entire kingdom of Wakanda on its head. It’s a pretty blatant piece of filmmaking, but one that is undeniably effective, and when coupled with the effective score and Jordan’s swagger in the role, it provides one of the best isolated moments in the film.

Killmonger travels to the ancestral plane

After becoming the Black Panther, Killmonger travels to the ancestral plane where he has a conversation with his father (Sterling K. Brown), who was killed in the movie’s opening sequence. The scene between Jordan and Brown is so emotionally affecting that it makes you feel more sympathetic for Killmonger than any other MCU villain. Killmonger’s father believed Wakanda should help people of African descent all over the world, and Killmonger takes up that mission, even as he remains furious with his father for dying and leaving him alone in Oakland when he was just nine years old.

T’Challa and Killmonger look at the sunrise

The conclusion of Black Panther is the least thrilling part, but Killmonger’s final moments, when he chooses to die instead of allowing T’Challa to save him, is one of the most powerful in the movie. “Just bury me in the ocean with my ancestors that jumped from the ships because they knew death was better than bondage,” he says. It’s a stunning reminder that the problems Killmonger was fighting for were real and that Wakanda’s policy of nonintervention allowed them to happen. Few characters have had better final lines or ones that more firmly underscore how humane and sympathetic they were.