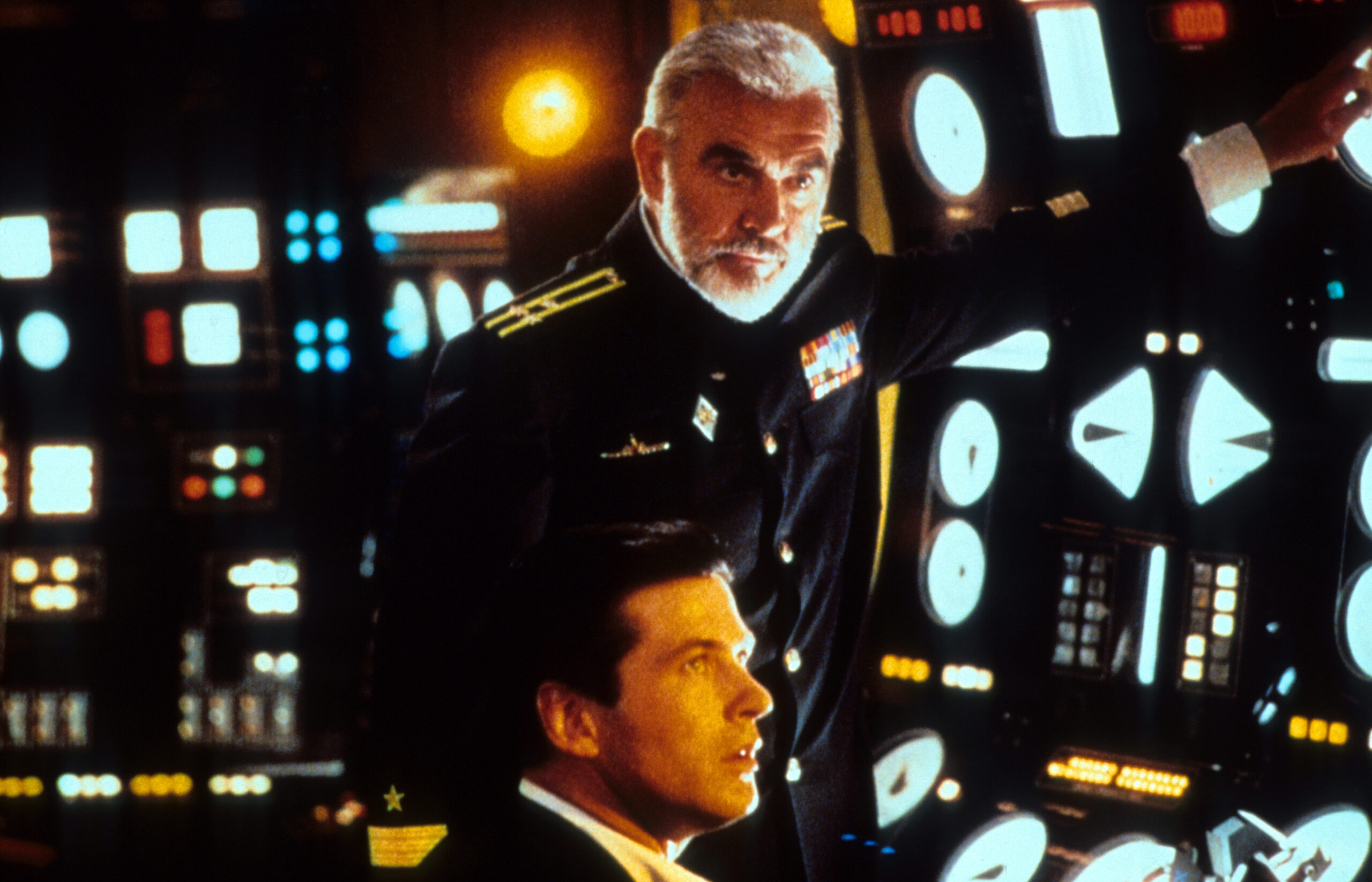 Movies featuring submarines are often gripping, thrilling, and full of suspense as these marvels of machines often engage in captivating action in a part of the world that many of us never see: deep underwater, submerged in the oceans of the earth.

Following, are the 10 best submarine movies of all time, according to this author.

The Hunt For Red October

Released in 1990, The Hunt for Red October easily stands apart from the rest of these types of movies. Starring Alec Baldwin and the forever-legendary Sean Connery, The Hunt for Red October, though fictional, was set during the latter stages of the Cold War. In the real world, military activities were tense and largely strategic “dances” between both the United States and the Soviet Union, usually stopping short of an all-out war that would’ve brought about numerous casualties.

The plot of The Hunt for Red October revolved around a cleverly defiant Russian Naval captain (Connery) in charge of the most dangerous vessel ever conceived. The plot masterfully lays out a race against time for the US Navy to hopefully intercept the lone Russian sub before time runs out. Directed by Die Hard filmmaker John McTiernan, The Hunt for Red October is based on one of Tom Clancy’s best literary works and laid the foundation for his later hit movies involving CIA operative Jack Ryan, played here by Baldwin.

Das Boot is a classic submarine drama that depicts a wartime environment from a different perspective: through the eyes of the German Navy during the events of World War II. Just like the first pick on this list, Das Boot was another fictional plot that was inspired by real events, more specifically based on a 1973 German novel of the same name. Sure, the Wolfgang Peterson directed Das Boot features some of the action you’d expect from a story of this sort, but the audience also gets to see how the crew of the sub reconciles navy life at that time and the commitment to a doctrine that many of the young sailors then perhaps didn’t fully understand.

The 1981 West German-produced Das Boot was critically acclaimed at the time and has become one of the more respected war films of its era. Das Boot was also nominated for six Academy Awards including Best Director and Best Adapted Screenplay.

When you have a movie with two legends such as Gene Hackman and Denzel Washington, you can bet it’ll be a great watch, to say the least. The plot of Crimson Tide pits a US nuclear sub captain (Hackman) against his executive officer (Washington) in a tug-of-war – pun intended – where a full-scale nuclear war hangs in the balance.

Released in 1995, the Tony Scott directed Crimson Tide plays very well on the psychological factor of war, in this case, with the two most powerful men in the vessel at tactical odds with each other. Crimson Tide was also one of the last projects that the production duo of Don Simpson and Jerry Bruckheimer worked on during their heyday of the 1980s and ‘90s. Crimson Tide was also nominated for three Oscars.

Okay, so Yellow Submarine might not have been expected, but the 1968 animated film by The Beatles does indeed qualify as a submarine movie; the word “submarine” is literally in the title for crying out loud! And why can’t it be on this list? Because there’s no threat of war and nothing gets blown up? Even if the legendary band isn’t quite your style, you’ve got to give credit to this musical comedy movie.

Yellow Submarine is often considered one of The Beatles’ better works, which is unique in itself considering they only worked on the closing scene of the movie and nothing else that made the final cut. Yellow Submarine was generally well received by audiences after it was released, continuing to stand well ahead of other animated films of its time.

Sticking with the trends of several other picks on this list is the 2020 World War II film Greyhound starring Tom Hanks and directed by Aaron Schneider.

Hanks plays a US Navy commander who led the USS Keeling, codenamed Greyhound, in front of an Allied merchant ship convoy that finds itself targeted by German submarines during the events of the Battle of the Atlantic.

The events depicted in Greyhound are actually fictional and based on the novel The Good Shepherd by C. S. Forester. Hanks also wrote the action-packed screenplay for the film.

Naval stories seem to be all the craze here as this choice from 2000, U-571, also has a place in this group.

Matthew McConaughey, Harvey Keitel, and the late Bill Paxton starred in this fictional World War II period piece about a crew of American sailors who go on a covert mission to recover a coded messaging machine from a German U-boat submarine. Even though the story isn’t real, acknowledgment is given to the real crews that undertook very similar missions during the war as the end credits roll.

Over the last couple of decades, U-571 isn’t always remembered as one of the absolute best in the genre, but it’s definitely a great watch. Movie critics mostly praised the film and it even earned two Oscar nods.

Going against the grain of this list is Operation Petticoat, a classic war comedy from 1959 starring cinema legends Cary Grant and Tony Curtis. Many folks might not be sure how war can be funny, but when the submarine is pink? Well, that might be all the explanation one would need. And after all, Curtis was known mostly during his career as a more humorous actor, so it definitely sells.

Operation Petticoat is certainly dated in cinematography, but is certaingly not considered politically correct these days. The plot includes a lot of instances that make fun of outdated tropes. Like women, for example – who weren’t allowed to serve in many capacities then – to actually be on board a submarine. Operation Petticoat, however, still holds up for the most part once you put aside the generational culture shock.

Another Cold War story is featured here with K-19: The Widowmaker. Harrison Ford stars as a Soviet nuclear submarine captain who must race against time to prevent war from breaking out, while keeping everyone on board from succumbing to a nuclear disaster in the process.

Released in 2002, the Kathryn Bigelow directed K-19: The Widowmaker stands apart from the other war-related movies on this list because it’s actually based on a true story: the 1961 events of the USSR’s first-ever nuclear ballistic sub.

Liam Neeson and Peter Skarsgaard also starred in this critically-acclaimed film that despite getting great reviews, was unfortunately considered a box office bomb.

1989 sci-fi classic The Abyss is directed by none other than the visual filmmaking visionary himself, James Cameron. A US search and rescue team commandeers a small oil rig crew on a time-sensitive mission to locate and recover a sunken nuclear submarine. Since this is a James Cameron sci-fi project, you know there are some logic-defying events to witness.

What the crew encounters below is breathtaking and for audiences, with The Abyss featuring the first inklings of the same sort of special effects graphics work that would make a later Cameron project, Terminator 2: Judgement Day, a visual masterpiece.

The Life Aquatic with Steve Zissou

2004 release The Life Acquatic with Steve Zissou, is one of comedy legend Bill Murray’s best films over the last couple of decades. Most of it is set either on the surface or underwater as Zizzou, played by Murray, leads a crew of fellow oceanographers on a quest to locate a supposedly mythical “jaguar shark.” While numerous watercraft are seen throughout the film, an actual submarine is only seen a few times in the entire film and is only used during the final act for just a few minutes.