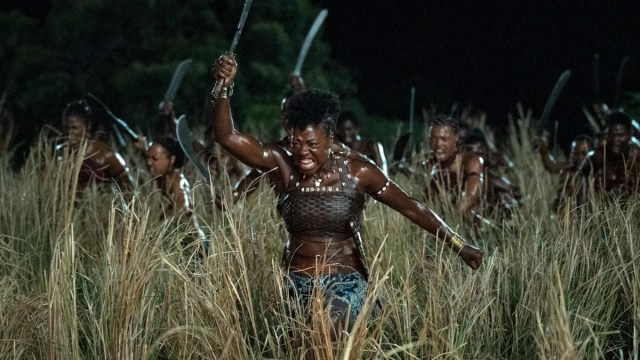 One of the more powerful films coming out in the near future is the Viola Davis vehicle Woman King. It features a woman-led cast and is filled with action and yes, lots of fighting.

In a recent behind the scenes clip, we got to see firsthand what the Oscar-winning actress had to go through to get in shape for the role.

“My body went through hell,” Davis says in the clip after it shows her lifting heavy weights in a weight room. Check it out below.

The women not only lifted but also had full on fight training with weapons.

Lashana Lynch, who plays Izogie in the film, said the training was harder than anything she ever did in her life.

“Ooh the training,” she said. “People think training’s going to be ‘you get a little bit strong to do a bit of stunts.’ But for this…”

Davis said the workload was intense: “Three hours of martial arts a day. Everything from swordplay, spears, machetes. Lot of punching. An hour and a half of weights. Sprinting. I mean I feel like a badass.”

The work looks like it paid off, because the women in the movie seem ferociously ready for any kind of battle.

Trainer and nutritionist Gabriela Mclain, in an interview with People, revealed that she wanted the actresses to look fit, but naturally fit, and true to the characters in the movie.

“My goal was to pretty much make it natural, just as the woman would look if they were to go and fight because it’s based on true stories. I’m trying to stay authentic, even with the body. There’s all kinds of enhancers you can take to get lean and ripped and all that, but I did not want them to look like Miss Olympia, I tried to stay authentic so they look like warriors.”

Mclain also said she did specific testing on the stars to make sure they were getting the best nutritional and physical plans for getting into shape.

“Before we started I actually did DNA testing on the main five that were signed under me, which was Viola, Thuso, Lashana, Sheila, and Adrienne. I did the DNA testing on all of them, which helped me pretty much figure out the best way to train, the best way to protect their muscles and protect their body because they’re all different. There’s no one plan fits all. Everybody needs to train in a different way.”

The movie is a historical tale based in reality. It centers around events that happened in The Kingdom of Dahomey, which was a powerful African state in the 18th and 19th centuries. In that kingdom, there’s a all-female warrior unit called the Agojie, who protect the kingdom.

Davis plays General Nanisca, hoping to train the next group of recruits and ready them for a life-changing battle against an army that wants to change their way of life.