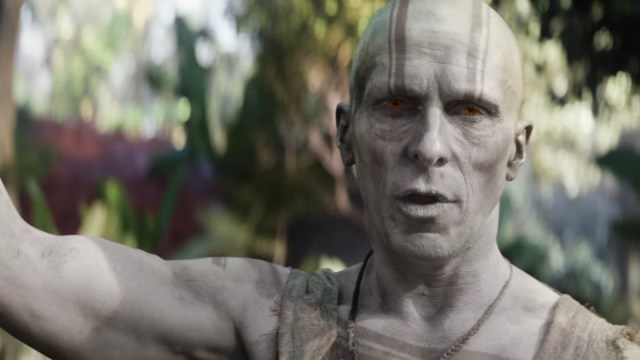 It won’t be long before we see Christian Bale make his eye-catching turn as Gorr the God Butcher when Thor: Love and Thunder drops into cinemas next week. Armed with a nightmarish build and a sword that can slaughter gods, it’s already clear that Gorr answers to nobody.

The same can’t be said about Bale, who was apparently strong-armed into the role at the whim of his children when he began to reconsider his involvement in light of a potential scheduling conflict.

In an interview with ScreenRant, Bale noted that his initial interest stemmed from the opportunity to work with the likes of Chris Hemsworth, Tessa Thompson, and Natalie Portman, as well as the chance to work under Taika Waititi as a director after being impressed with Waititi’s script.

“For me, it was Taika. I loved Thor: Ragnarok, as did my family. We also all loved Jojo Rabbit, and then I had worked with Natalie and wanted to work with Tessa and with Chris. It comes down to that, really. I just went, ‘Great!’ Loved the script, loved Taika’s description of the villain. ‘Let’s go do this.'”

Hesitation then came in the form of a scheduling conflict, which was ultimately obliterated by the demands of Bale’s children.

“There were some potential scheduling conflicts. I said to my family, ‘I don’t think it’s going to work out,’ and they went, ‘No, you make it work out. You’re doing this, Dad.’ They gave me my marching orders, and I dutifully obeyed.”

Now that we know who to thank for the film’s marvelous villain casting, fans can look forward to being captivated by Gorr the God Butcher when Thor: Love and Thunder releases to cinemas on July 8.