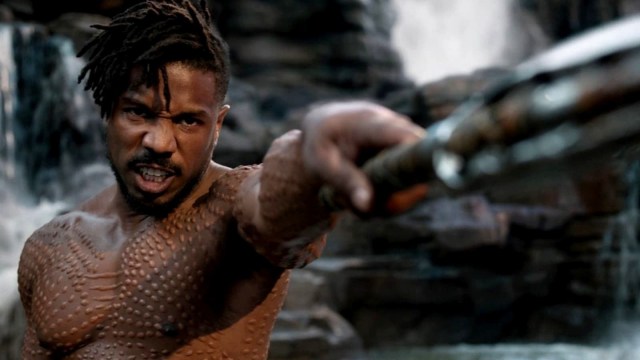 Marvel fans rejoice as the latest film in the Marvel Cinematic Universe is out now — Black Panther: Wakanda Forever, the sequel to 2018’s Black Panther is finally here. Directed by Ryan Coogler, the film sees Wakanda and its people mourn the death of their King T’Challa. Therefore, one of the key themes in the film is loss, focusing on how T’Challa’s family, especially Shuri (Letitia Wright) deals with the death of her brother.

Many of the characters from the original film return, including Okoye (Danai Gurira), Everett Ross (Martin Freeman), Queen Ramonda (Angela Bassett), and Nakia (Lupita Nyong’o). But there is one main character from 2018’s Black Panther that many people assumed might be absent in the sequel, as he died at the end of the previous film. That’s right, we are talking about T’Challa’s cousin Erik Killmonger, played by Michael B. Jordan.

So let’s unpack the many layers of Black Panther: Wakanda Forever and find out whether Killmonger appears in the film.

Is Killmonger one of the returning characters in Black Panther: Wakanda Forever?

Throughout the entire film, the absence of the Black Panther is felt, as the Heart-Shaped Herb was destroyed by Killmonger himself in the previous film. It is a major plot point as Shuri could not artificially replicate the Herb in time to help T’Challa before he died. But Namor was born after his mother had consumed a similar Herb, as Vibranium had also landed near Talocan. So when Namor gives Shuri a gift, jewelry made from the Talocan Herb, she used it to fabricate a near identical replica of the Heart-Shaped Herb. She crushes it into a liquid and consumes it, becoming the next Black Panther.

Before she can become the Black Panther, she is transported to the Ancestral Plane, just as T’Challa and Killmonger had been in the first film. But while both T’Challa and Killmonger saw their fathers, Shuri awoke in the Wakandan throne room, with Killmonger sitting in the regal sear. She expected to find either one of her parents or her brother, but Killmonger was waiting for her because of how enraged she felt regarding how she couldn’t save her mother, who dies earlier in the film, or stop her brother from dying.

Of course, Killmonger in the first film was just as enraged as she was because T’Chaka (T’Challa’s father) killed his father. Angry at his estranged family, and angry at the state of the treatment of black people in America, Killmonger wanted to use Wakanda’s power to go to war with America. And while Killmonger in the Ancestral Plane tried to convince Shuri that she was like him, Shuri denied it. By the end of the film, she had reconciled her feelings about her brother and mother’s death and opts not to kill Namor. She offers a truce to help Talocan in its time of need, choosing to stand alongside the nation.

When Killmonger died, killed by T’Challa at the end of the first film, it made his appearance in the sequel quite unlikely. But as we previously pointed out, using the Ancestral Plane to bring back the fan-favorite villain would have been a stroke of genius and indeed it was.

When it comes to villains in the MCU, the overarching trend had been to kill them, leaving no chance of their return in the future. But lately, this pattern has received much-appreciated customization as MCU films have been using creative plot points to bring those villains back as seen in Black Panther: Wakanda Forever. For example, Red Skull was the guardian of the Soul stone in Avengers: Endgame. A more recent example would be Spider-Man: No Way Home when multiple Spider-Man villains were brought into Earth-616 right before their original deaths in their respective universes in the past Spider-Man films.

Thus, it should not have been too much of a surprise that Michael B. Jordan returned to play Killmonger either, especially since he did recently reprise his role in the Disney Plus animated series What If…? as well. He is also friends with director Ryan Coogler and the two are frequent collaborators, working together on Creed and Fruitvale Station. In case, it was a surprise, it was certainly a welcome one, as Killmonger proves to be an excellent addition to the sequel.