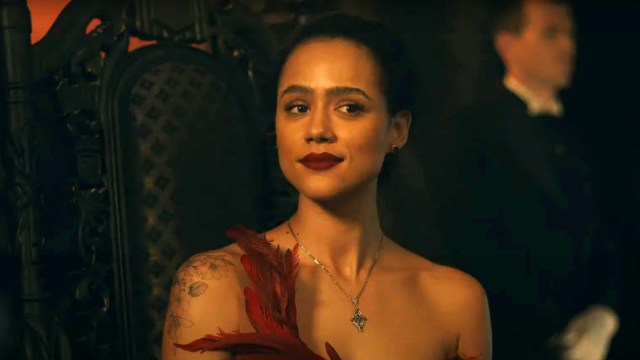 The following article contains spoilers for the 2022 film The Invitation.

The newest horror film to release in 2022 is The Invitation starring Nathalie Emmanuel. The film, which releases on August 26, 2022, is written and directed by Jessica M. Thompson and co-written by Blair Butler. The Game of Thrones star, Emmanuel, plays Evie in The Invitation, a woman who after the death of her mother takes a DNA test to see if she has any extended family.

The DNA test uncovers a cousin named Oliver (Hugh Skinner) who hails from the UK. After she agrees to accompany him back to England for a wedding, she soon discovers that something is fishy with her newfound family and with her host Walter (Thomas Doherty), but that does not stop her from falling in love. The Invitation is a vampire film and an adaptation of Bram Stoker’s Dracula, and Walter is really the head vampire himself, Dracula, although he is never actually named that. The film features a few other characters from Dracula lore, like Mina and Jonathan Harker, and Mr. Fields (Sean Pertwee), the head butler who is an obvious adaptation of Renfield, Dracula’s familiar.

Let’s take a look at the ending of The Invitation, if the film leaves itself open for a sequel, and more importantly if there is anything extra during or after the credits.

What happens in The Invitation after the credits?

While The Invitation does have an extra scene at the end of the film, there is no post-credits scene. A scene just before the credits begin features Evie, two weeks after her defeat of Dracula, joined by her friend Grace (Courtney Taylor) as they stalk Oliver to confront and murder him. There are no additional scenes during or after the credits.

The Invitation does not really leave itself open for a sequel, however as it does end with Evie and Grace following Oliver to kill him, you could do a sequel with the pair as vampire hunters. If you were to do a sequel like that it would be fairly different – especially in tone – from the original.

The Invitation, however, doesn’t really need a sequel. The whole film wraps up in quite a neat bow and it would be believable if after getting revenge on Oliver, Evie just went back to her normal life, maybe now with some wealth from a dead vampire, giving her a chance to pursue her career in ceramics.

Catch The Invitation while it is in theaters starting from August 26, 2022.