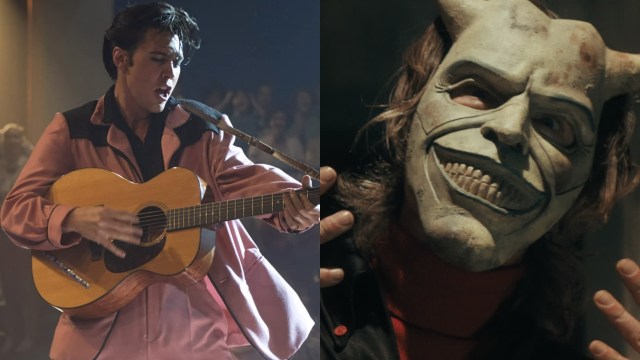 Baz Luhrmann’s hip-swinging sensation piece Elvis is currently swaying its hips at the box office and creating some stellar movie magic as Austin Butler shines in the titular role, with the biographical film grossing $3.5 million in early previews from over 3,000 locations across the United States. To add, Luhrmann’s film currently boasts an 81 percent Certified Fresh score on Rotten Tomatoes and looks to build its box-office repertoire over the weekend — where it’s projected to gross an impressive $20 million during the weekend showings.

But, just like with any other well-made horror movie, the fear factor is looking to up the ante at the box office as The Black Phone makes its long-awaited debut in theaters today. And much like Elvis, the Ethan Hawke vehicle grossed $3 million at nearly 3,000 locations in early previews and fan events — with early projections indicating that the supernatural horror will touch similar numbers to Luhrmann’s musical drama.

Early projections have inevitably pitted these two movies against each other, with Butler’s Elvis Presley and Hawke’s The Grabber engaged in a battle at the box office to see which movie can outperform the other. Of course, the two movies are simultaneously battling Tom Cruise and Top Gun: Maverick, which has nearly grossed $1 billion at the box office thus far.

While it remains to be seen which movie will emerge victorious in the battle that relies on persistent movie-goers, the intriguing nature of hips vs. horror is surely enough to entertain the masses and keep the box office heated up post-pandemic.