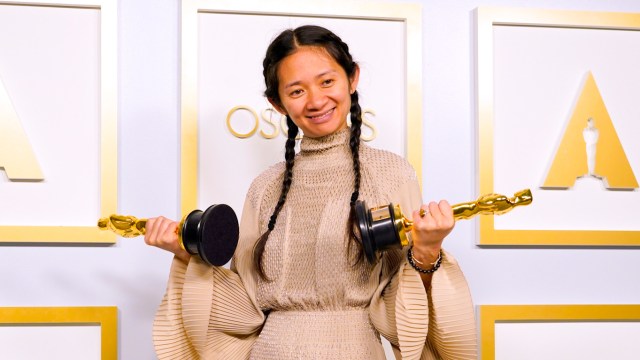 Chloé Zhao has had the kind of career most film directors would kill for, becoming only the second woman in history to win an Academy Award for Best Director for her film Nomadland, which also won for Best Picture. A year later, Marvel released The Eternals, her big budget adaptation of the title about godlike creatures walking the Earth.

And now, The Hollywood Reporter reports that she’s signed a multi-year first look deal with Searchlight Pictures for her own, unspecified TV series. A “first look deal” is one in which the studio gets first dibs on any TV idea that Zhao wants to develop. Searchlight is the company that produced Nomadland, and it’s owned by Disney, Marvel’s parent company, so it’s clear that the mini-major studio is interested in staying in the Chloé Zhao business.

While Searchlight is mostly known for prestige filmmaking, they have recently ventured into television production with Hulu’s The Dropout, which won six Emmys, and a deal with Brooksfilm to produce a Mel Brooks variety series, History of the World Part II, a sequel to his hit comedy from 1981.

“Chloe is a visionary filmmaker and, since the moment we finished Nomadland, we have looked to find new ways to collaborate again… We are inspired by the breadth of Chloé’s storytelling passions and are beyond happy to be able to link arms and expand the opportunities to support personal, powerful, and enduring stories.”

Nomadland was a critically acclaimed bright spot in a COVID-era movie release schedule that saw many studios pulling back on putting out films until theaters reopened. The 2021 The Eternals was less warmly received, with a critic score of only 47% on Rotten Tomatoes.