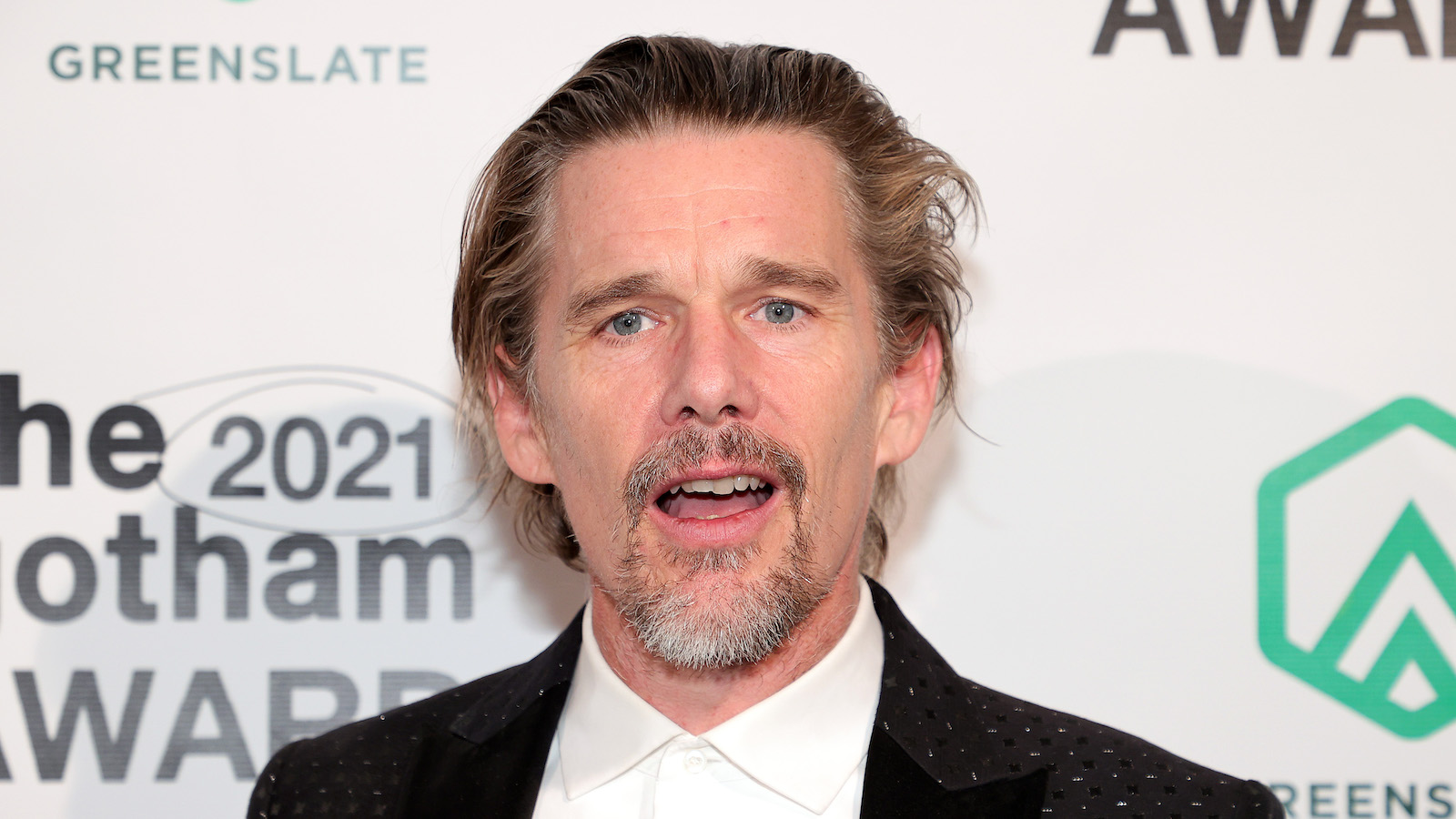 Will someone get this man a red lightsaber and a black cowboy hat? Ethan Hawke has decided it’s time to get in touch with his dark side.

The actor will be appearing as the villainous child kidnapper “The Grabber” in this year’s adaptation of Joe Hill’s The Black Phone. He’s also adding another sinister listing in his acting credits, portraying Arthur Harrow, the reputed main villain of Disney Plus’ upcoming Moon Knight series.

Hawke’s career has spanned decades and has garnered critical acclaim for his roles in Richard Linklater’s Before trilogy, his early roles in Dead Poet’s Society and Reality Bites, to recent offerings such as 2017’s First Reformed. However, the actor has always seemed hesitant to step into the shoes of the heavy. “I’ve always had this theory that when you teach an audience how to see the demon inside you, they don’t unsee it for the rest of your career,” Hawke told Entertainment Weekly, “Jack Nicholson can be playing an accountant and you’re still waiting for him to explode like he did in The Shining. It changes your relationship to a performer, so I’ve always been nervous about it.”

Of his decision to go dark, Hawke stated, “I realized I’m on the other side of 50, and it’s time to put a new tool in the tool kit. Villains might be my future.”

Hawke certainly seems to be leaning in. His character in The Black Phone is a far cry from his first collaboration with Blumhouse and director Scott Derrickson, Sinister, where he played the ostensible protagonist of the film. “The Grabber” is a full-on predator in every sense of the word and may go on to join such legendary monsters as Jason Voorhees, Michael Myers, and Ghostface in the Horror Film Villains Hall of Fame.

That said, his character in Moon Knight is far more nebulous. Little is known of Arthur Morgan, an obscure villain who isn’t even listed in Moon Knight’s rogues’ gallery very often and only appeared in a single issue of the comic’s second volume, Moon Knight: Fist of Khonshu. In the comics, Harrow is a deformed scientist living in the Yucatan researching pain management using a theory — we later learn — based on Nazi super-soldier experiments. But Hawke is -unsurprisingl- not forthcoming with any of the finer details of the character.

“The comic book world meant a lot to me when I was younger,” Hawke told EW. “I was always a little apprehensive; there’s a certain kind of actor that really excels in that universe, and I’m still not sure I’m one of them.” But, he says, “the more I learned about the Moon Knight, the more turned on I got, because it’s so much better than trying to create something that the audience already has a big agenda with.”

Hawke would go on to say he drew on cult leader David Koresh as inspiration for Morgan, as well as psychiatrist and “Collective Unconscious” theorizer Carl Jung. As far as the character’s direction, Hawke states, “Your gut leads you.” Perhaps tellingly, Hawke also went on to state, “The uber-rich villain mastermind isn’t interesting to me. I love the ones who believe that they’re a good person and that’s why they have to kill you. That, I find really terrifying.”