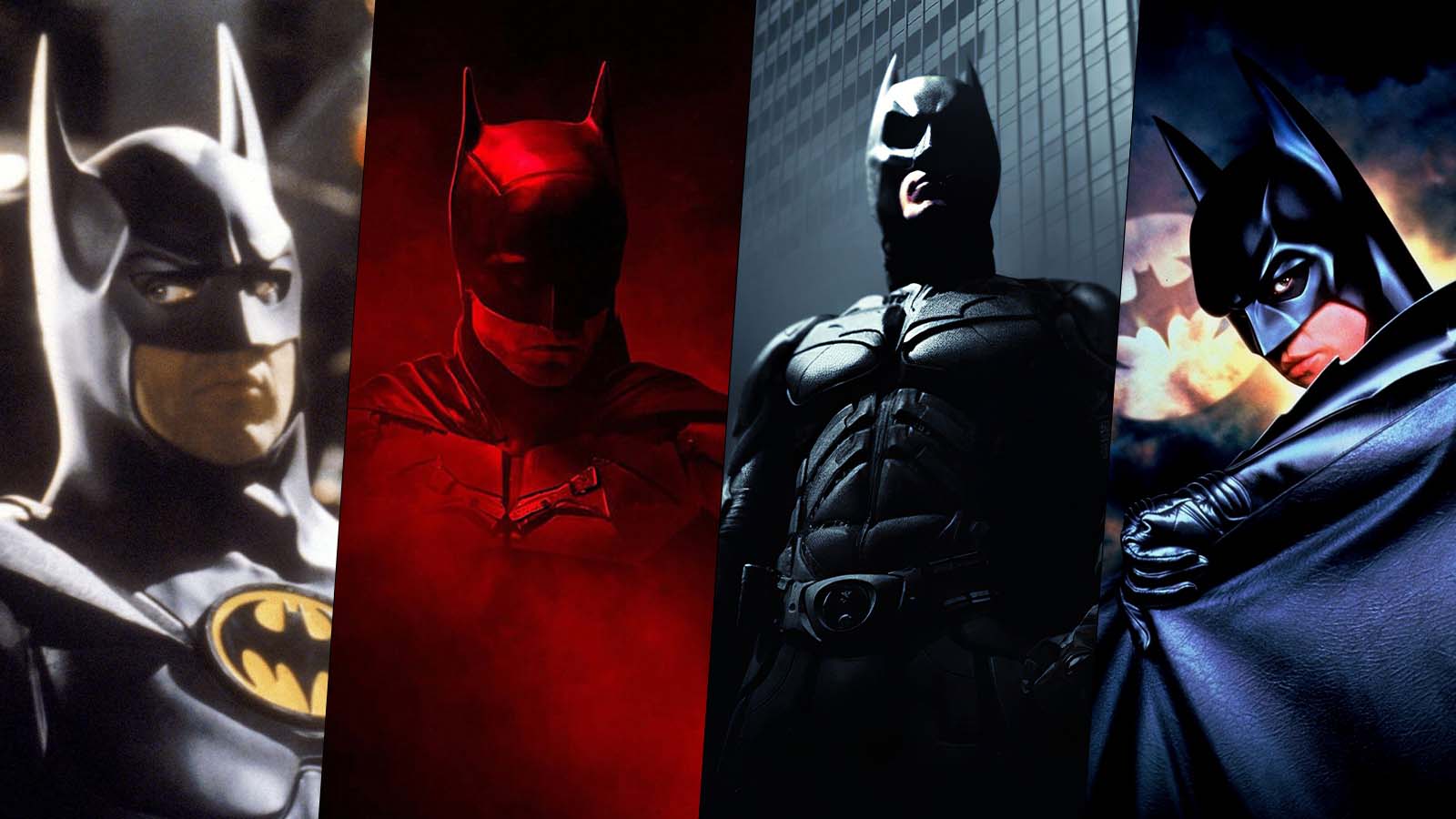 Matt Reeves’ The Batman hit theaters worldwide on Friday, March 4, and introduced Bat-fanatics to another portrayal of the Caped Crusader in Robert Pattinson, thereby allowing for an updated ranking of all the Batman outings. Twilight’s Pattinson initially seemed like a bizarre choice for a big-shoes-to-fill role like Batman, but it can be safely said, even less than a week since debuting, that Pattinson’s crime-fighter ranks highly among the greats.

Some may argue that Kevin Conroy’s vocals from Batman: The Animated Series provided the most authentic portrayal of the Dark Knight, whereas others may incorporate the underdog Will Arnett from The Lego Batman Movie and decide that he brings something to the table that all the others did not. However, this worst-to-best ranking is solely based in the realm of live-action, discounting all animated and computer-generated equivalents. So, without further ado, let’s proceed with the Bat-ranking.

Sadly, almost always, Lewis Wilson ranks dead last. He does garner some sizeable appreciation for paving the way for the others as the first ever on-screen Batman, but his performance unfortunately fails to deliver as we would have hoped. Understandably, there were limitations in the ’40s and every production value, from costume design to CGI, has dramatically improved since then.

Unfortunately, Wilson manages to make Batman sickeningly campy, even for the ’40s. Nowadays, Batman is relentless: rough around the edges, persistently brooding and for lack of a better term, ruthless. The ’40s were just a different time, and evidently, Wilson struggled to make Batman memorable enough for millennials to even distinguish him from all the others by name.

Jumping forward to the ’90s, Val Kilmer manages to overshadow Wilson, but failed to upstage his predecessor, Michael Keaton, who has been held in high regard ever since Batman (1989) and Batman Returns (1992). Kilmer had a tremendously pressuring mantle to take on after Keaton dropped out of the third movie, but like Wilson, he failed to make the character distinctive enough to be permanently seared into our brains ⏤ for better or worse.

Unfortunately, the only way Kilmer’s Batman will be remembered is when we compare him to other, much better Batman actors. Honestly, Kilmer’s co-star Jim Carrey made a bigger name for himself than the titular star, which says a lot more about Kilmer’s portrayal than it does Carrey’s. Still, Kilmer deserved another outing as Batman given that he hardly had the chance to take off his training wheels.

Robert Lowery had a whole esteemed career panning out before landing the role of Batman in 1949 for the second 15-chapter Batman film series produced by Columbia Pictures. Honestly, all that can be said about Lowery is that he made marginal improvements on his predecessor, Lewis Wilson, but sadly never made the cut to become an influential and unforgettable Batman.

Like many others, Lowery has become more background noise than any notable consideration in Bat-based rankings. When donning the Batsuit, Lowery did make an admirable attempt to personalize the character ⏤ or at the very least make waves ⏤ but the end result was just as unoriginal and painfully unimaginative as the ones who came before.

The only detail that anyone ever remembers from George Clooney’s Batman are those freakishly oversized nipples. The Bat-nipples are the only indelible impression that Clooney’s Batman made on a ’90s audience, especially after the supporting cast tragically overshadowed him. Rising star Arnold Schwarzenegger as Mr. Freeze completely outshone Clooney’s Batman; he was more emotive, multi-layered, and just plain laughable, but it earned him some acknowledgement. Uma Thurman’s Poison Ivy was another stand-out that wiped the floor with Clooney’s dual-persona of Bruce Wayne/Batman.

It’s unfortunate that Clooney was upstaged by far more noteworthy characters. Robin and Batgirl were truly the unsung heroes of Batman & Robin, and it surely stands to reason that the whole fiasco was an embarrassment to the Batman legacy, particularly since Clooney himself has expressed distaste for the project in subsequent years. As for the freaky Batsuit, we try not to draw any more attention to it.

Over the years, Batman has been misinterpreted as nothing more than a proverbial Grim Reaper, restricted by the connotations of vengeful, mean-spirited, and restlessly motivated. However, Adam West transports us back to the joyous period where Batman had permission to be much more than the hard shell that bleak tales like Alan Moore’s The Killing Joke have made him. West’s Batman was over-the-top, strikingly colorful, and completely bonkers, but it worked.

Many Bat-fans consider West to be the Batman, providing wholesome family fun for all ages and embodying the Dark Knight ⏤ or Light Knight, should we say ⏤ in a manner that no other Bat-actor had ever attempted. He made the role much more than it is, put his own personal stamp on it, and earned a loyal following that may never be shaken by the new arrivals and have stayed loyal to West since the start. West looms largest for many Batman aficionados in pop-culture history.

Taking an alternative route, Ben Affleck focused more on the grizzled, tormented, and hard-bitten Bruce Wayne over his masked alias. Unfortunately, Affleck was dealt an even poorer hand than George Clooney in Batman & Robin. For starters, the Batsuit was ⏤ in a word ⏤ atrocious. It made Affleck’s Batman look bulky and misplaced, but to make matters worse, he starred in several films that can easily be dubbed the worst that DC Comics has ever produced.

Despite that, Affleck conveyed the harrowing turmoil of everyday crime-fighting extremely well, taking a never-before-seen dip into Bruce Wayne’s psyche. By 2021, Batman had become borderline psychotic and extremely hard to vouch for, so it was probably for the best that DC chose to recast the role. On the plus side, Affleck’s Batman can be credited with forming the live-action Justice League and imbued the modern icon with a certain unnerving bitterness that was inescapable and difficult to justify.

When Tim Burton first announced in the late ’80s that comedic actor Michael Keaton would be embodying the Caped Crusader, there was noticeable outrage at the decision, which fans believed to be in poor taste. As it turns out, Batfans soon learned to put more faith in Burton, who would go on to create multiple cinematic masterpieces. Keaton was an inspired choice, crafting the ideal formula for Batman’s complex personality, equal parts simmering rage and cold calculation.

Granted, Keaton was surpassed by Jack Nicholson’s Joker, but the dynamic duo made Batman enjoyable. Keaton and Nicholson have since been praised ⏤ along with Burton ⏤ for offering up an era-defining centerpiece that succeeding material could mold itself after. Keaton channels Bruce Wayne’s effortless charm and Batman’s unwavering resolve perfectly.

As the latest test dummy to take the Batsuit for a spin, Robert Pattinson received mixed reactions upon announcing his involvement in Matt Reeves’ The Batman. Naturally, Pattinson’s portfolio highlighting several years as a misunderstood teen vampire sparked some apprehension. Similar to Affleck, Pattinson delves deep into Batman’s psyche, whose actions are inflicted with a physical and mental exhaustion that presents in the form of moral ambiguity. He wants to do the right thing, but doesn’t quite know what the right thing is.

Pattinson’s portrayal, aided by Reeves’ deliciously dark vision, makes beautiful music: dark and dangerous in all the right ways, sprinkled with some humanity, and always bordering on the profound, but never quite letting the veil slip. Pattinson made Batman fearless, but grounded him within the limitations of reality; he knew Batman was only human, just like everyone else. Pattinson’s Batman is raw, real, and clear-cut. He falls apart at expected moments because the Batman lifestyle forces him to confront the biggest downfall of all: mortality.

As highly as one can speak about Robert Pattinson, there has never been ⏤ nor ever will be ⏤ any Batman that can overthrow the monarch himself. Christian Bale did have more opportunities to broaden his horizons over the course of the Dark Knight trilogy, which gave him an advantage over some of the other one-shot actors. He transforms Bruce Wayne from novice crime-fighter to respectable protector. His Batman is only blemished by the fact that Heath Ledger stole the spotlight on more than one occasion.

As far as the performance itself, Bale was flawless by all means. He instilled enough believability in the Batman character that every moment felt less about proving invincibility and more about surviving. Bale deserves the top spot for many reasons, but the glaringly obvious one is that he finds a harmonious middle ground between the decidedly breakable Bruce Wayne and the imposingly untouchable Dark Knight. He taps into some familiarity that was almost entirely lacking in all other portrayals.