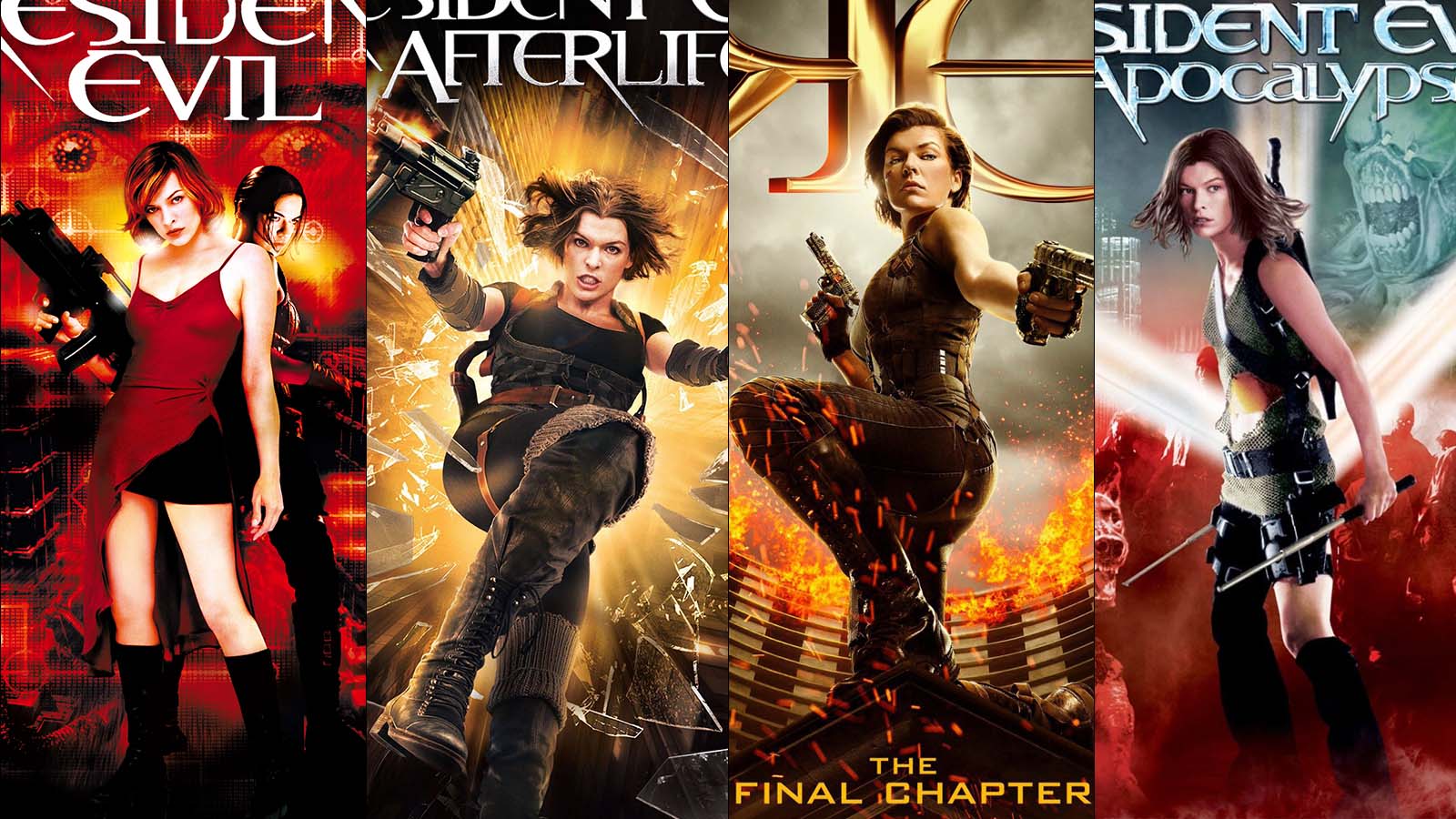 Live-action film adaptations based on popular video game franchises have become more common in recent years. In 2018, we saw the release of Tomb Raider starring Alicia Vikander, which chronicled the capture, survival and escape of Lara Croft as a castaway searching for her long-lost father Lord Richard Croft. More recently, Sega’s Sonic the Hedgehog gained a live-action adaptation in 2020 and is currently awaiting its sequel — Sonic the Hedgehog 2 — which arrives in theaters on April 8. Uncharted, starring Tom Holland and Mark Wahlberg, released on February 18, paying homage to the Naughty Dog franchise.

Unfortunately, Resident Evil: Retribution ranks lowest. Truthfully, its criticisms are a little harsh, but as the fifth and penultimate film in Anderson’s franchise, it certainly feels more like a money-grabbing scheme than an honorable installment. Where the others succeed, Retribution fails; the CGI-enhanced surroundings amp up the action sequences, but ultimately draw attention away from the central plot, which gets mauled by a hoard of zombies somewhere between beginning and end. Retribution has an abundance of “been there, done that, got the t-shirt” elements, which feel overplayed and tiresome as we draw nearer to the franchise conclusion.

On the plus side, Retribution feels more derived from its video game sources than some of its predecessors. It feels more like a video game cinematic than a completely separate perspective, and plays on its emotional value more than the zombie-fighting ploy that drives it. There are bonus points to give Retribution for its motherhood tie-in on Alice’s part, rounding out her character arc as a struggling survivor and parental figure. Sadly, those positive factors are outweighed by cliché after cliché that tarnish Retribution’s reputation.

Resident Evil: Afterlife has long been considered the weakest in the whole franchise, but it ranks above Retribution for several reasons; Afterlife looks good, despite coming out two years earlier than Retribution, and the action is well-staged and consistently fast-paced. As one of its strongest advantages, Afterlife has some stunning cinematography and its 3D effects are ahead of its time, almost compensating for the subpar plot and long lapses of pointless filler between action segments. As the second highest-grossing entry of the series, Afterlife performed exceptionally well at the box office and surpassed its predecessor Resident Evil: Extinction‘s overseas total. At the time, Afterlife was the sleekest Resident Evil film to date, thanks to its 3D capabilities, but the visuals were bogged down by a lack of imaginative storytelling.

As enjoyable as Afterlife can be at times, it doesn’t discount the fact that the sequel feels wholly unnecessary and barely progresses the plot beyond introducing Jill Valentine as a soon-to-be antagonist that will inevitably fight Alice later on. Spoiler: she does. Shawn Roberts’ Wesker feels misused and misplaced within the Resident Evil world, which is dreadfully disheartening, considering Wesker is one of the main villains in the video game series. Afterlife feels shoddy and inessential, only held above the surface by its contradictory box office records, which calculate Afterlife missing about $1.5 million from the total the three previous films in the series had made combined — an impressive commercial feat to say the least.

As the direct sequel to the original Resident Evil film, the bar had been set tremendously high to match audience expectations. One major plus for Apocalypse is its close relationship to the Resident Evil games; the film borrows elements from several games in the Resident Evil series, such as the characters Jill Valentine and Carlos Olivera and the villain Nemesis. Despite being the lowest-rated Resident Evil film on Rotten Tomatoes, Apocalypse surpassed the box office gross of the original film. Unfortunately, the commercial earnings are overshadowed by the critiques, which reflect poorly on the production. Like many other Resident Evil installments, Apocalypse can be criticized for its lack of originality and creativity that seems half-heartedly covered up by too much action and not enough plot development. It progresses far too slowly to be considered a good film, but thankfully, when Milla Jovovich gets full momentum as Alice, it becomes good enough to overlook the flaws.

Meanwhile, Sienna Guillory’s portrayal of Jill Valentine was a saving grace for Apocalypse, implementing her as a prominent and crucial cog in an even larger machine. There is a lot to be said about the fight between Alice and Nemesis, which felt almost idiotic and lacked the wow factor that can be expected from an epic hero-versus-villain showdown. It felt rushed, simplistic, and without the usual flavor and flair that Resident Evil is widely known for. Even the aspects of biological horror felt tame and generic compared to the sequels and Apocalypse ultimately felt like a stepping stone on the way to bigger, better films. It was forgettable, but it was fast, funny and daring, making its definitive mark as a must-see sequel even with its imperfections.

Rather predictably, Resident Evil: Extinction was largely criticized for its mediocre attempt at masking a poorly executed plot with bouts of Alice kicking zombified butt. As Anderson should have gathered, that technique only works so many times; fool me once, fool me twice, and all that. Extinction shamelessly relies on cliché plot points, including the done-to-death moment where a character gets bitten, neglects to tell the others, then inevitably ends up the martyr when the moral choice arises for their companions to execute them to protect the masses. Nevertheless, the story and characters are thoroughly engaging, the fight sequences are meticulously placed between periods of meaningful dialogue and interactions. Its world-building was top notch, effectively creating an unsettling and creepy open world where monsters lurk around every corner.

By Extinction, Anderson had crafted a fully-realized pathway for Alice’s story to unfold, which it does nicely, enabling the franchise to stay fresh and progressive. Extinction paves the way for Afterlife and Retribution, gifting an open-ended climax that breeds many possibilities, if only its successors had delivered the goods. It provides a meaty middle chapter, delving more into the finer details of the convoluted narrative and offering up plenty to keep the devotees satisfied, even with the wildly unnecessary airbrushing on Jovovich’s face for some close-ups.

Stepping away from the Anderson universe, Resident Evil: Welcome to Racoon City provided a fresh take on a well-known story as Johannes Roberts took the directorial helm. The plot was derived from the Resident Evil (1996) and Resident Evil 2 (1998) video games, serving as a reboot of the franchise. Welcome to Racoon City, while generating some reasonable doubt, turned out to be a faithful adaption, full of nifty Easter eggs and all-new perspectives on classic characters. Returning to Racoon Police Station and Spencer Mansion felt like a salute to long-time Resident Evil fans who stuck around through the early 2000’s and beyond. Roberts sticks close to the source material, whereas Anderson lacked substance at times and the tie-ins felt sloppy.

However, Welcome to Racoon City is cursed by the underwhelming feeling that many Resident Evil films tend to arouse in viewers. It does, on occasion, feel devoid of the imaginative finesse that made its predecessors sparkle like diamonds in the rough. There are times where it can be assumed that Welcome to Racoon City was made popular because it reeled in a younger generation of fans because those of us who enjoyed the original series had a few bones to pick. Regardless, Welcome to Racoon City improves on areas where its predecessors fell short, providing more convincing CGI and giving the characters depth to make them relatable and more significant than expendable.

Rounding out Anderson’s pentalogy, Resident Evil: The Final Chapter shatters the misconception that the final films are always the worst. It comes full-circle, tying up loose ends and bringing back old characters for one last send-off, which feels beautifully poetic. The Final Chapter became the highest-grossing film in the franchise — entirely well-deserved —and even topped the original. For Resident Evil fans, it provides a satisfying conclusion to the post-apocalyptic saga, encouraging newcomers to play catch-up and rewatch some of the earlier installments. The Final Chapter received some criticism for its decision to not bring back surviving characters — notably Jill, Leon, and Ada — and audiences felt that the lack of closure was off-putting and disappointing, especially since the cliffhanger of the previous film suggested a follow-up.

Since The Final Chapter came 14 years after Resident Evil, the special effects rendering had improved dramatically, giving the sixth installment a certain unbeatable advantage over the others. Newcomers Ruby Rose, Rola, and William Levy were refreshing additions to the familiar ensemble cast, bringing about more sub-plots to explore. Unfortunately, the film fell victim to clichéd moments and a lot of backlash for a disruptive directorial decision to not include fan-favorite characters. Even so, The Final Chapter is easily one of the best in the entire franchise — which sometimes isn’t saying much — hence its second-place ranking.

Obviously, Resident Evil needs to be appreciated. It barges in, guns blazing, to reinvent the zombie genre for the 21st century, slipping in an anti-corporate message while still managing to scare its viewers and promise heart-pounding moments of rip-roaring action. At times, it felt overbearing, loud and plainly cheesy, but those blemishes could be linked to the era, wherein filmmakers were adapting to the changes brought about by advanced technology and an all-new crowd of Resident Evil fans.Many viewers find Resident Evil to be a bit of a guilty pleasure, especially because — looking back in 2022 — the production quality had suffered intensely from the present-time limitations of the early 2000’s.

Resident Evil borrowed elements from Resident Evil 2 and 3, such as introducing the Umbrella Corporation, the Nemesis program and S.T.A.R.S., therefore setting up the locations and organizations for use in future sequels. Anderson shot the camera angles specifically to allude to the video game perspectives and integrated scenes that reflected the content of the Resident Evil series, thereby providing plenty of callbacks to the source material. Naturally, Resident Evil fans loved it, resonating with the fact that — for some — the franchise of childhood pass-times had become full-length feature-films in a whole universe that would eventually span 20 years in the making. Resident Evil started it all, whether it had the technology to be visually appealing or not, kick-starting an eventual franchise that would bring together new fans and old.