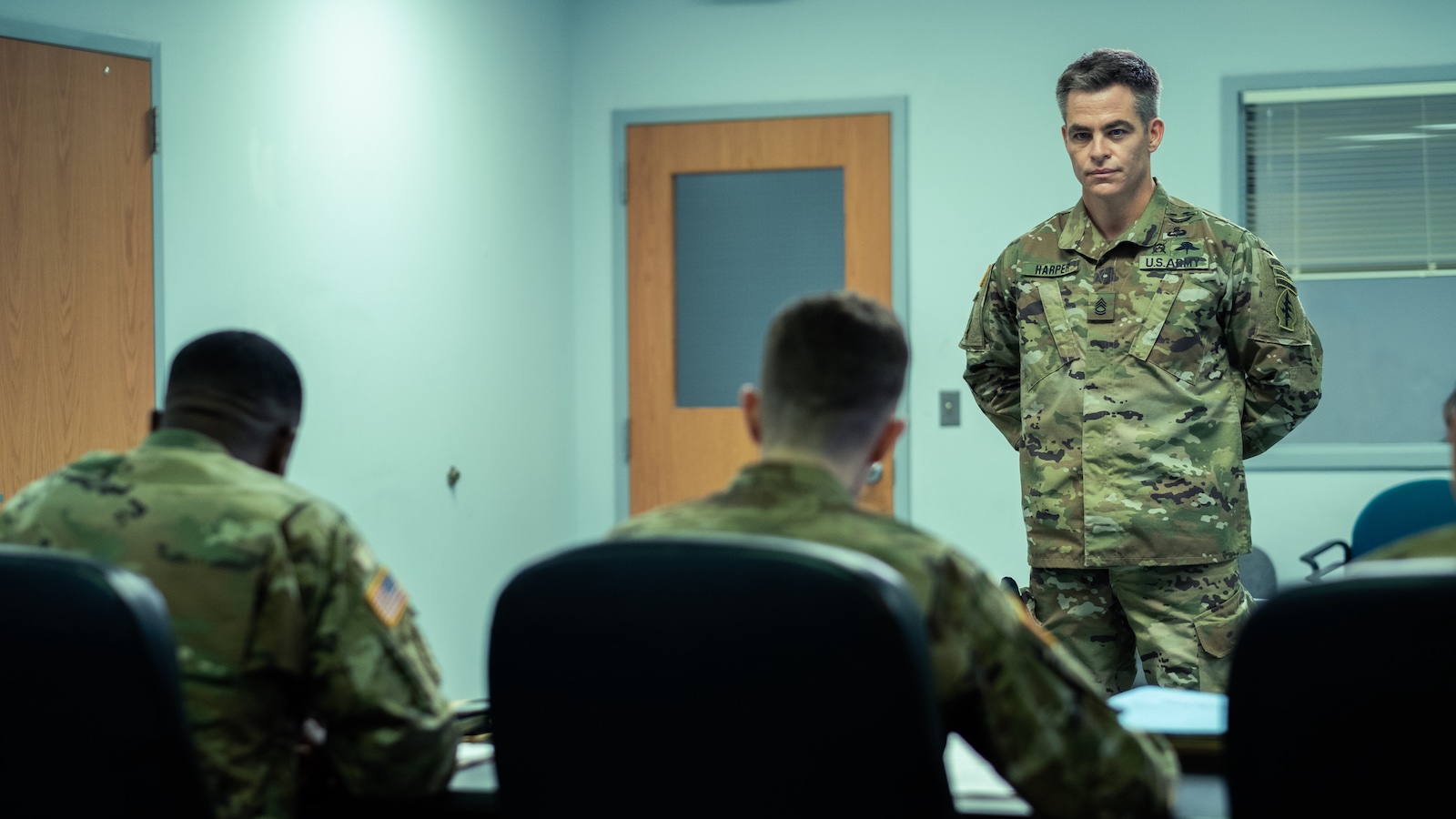 There are no heroes in the military movie The Contractor. Chris Pine plays James, a would-be career soldier who is discharged after a random drug test detects the drugs he’s been using to self-medicate his PTSD. Deep in debt and thrown to the curb by the institution he revered all his life, he takes up his old military superior Mike (Ben Foster) on his offer to take a job for a private military company.

We Got This Covered spoke to director Tarik Saleh, who previously helmed the Sundance favorite The Nile Hilton Incident, about the eerie timing of the project and getting past Chris Pine’s pretty face.

The Contractor was shot in Atlanta, LA, Berlin, and Romania. Berlin, in particular, posed a challenge that Saleh and Pine enjoyed nonetheless, “I thought it was fun to shoot there because it’s not very friendly to filmmakers.”

That meant they could only bring seven people along to shoot a scene in the subway, a number that included the crew and Pine, and they got lucky with that number. Apparently, Pine had a fan in one of the guards, so in exchange for a selfie, the boom operator was granted access to the shoot.

“We’re shooting in the middle of the night and Chris is totally smashed up and bloody,” laughs Saleh. “And they’re like, ‘Was that the guy from Star Trek that got beaten up?’ So it was very funny.”

Pine was attached by the time Salah got the script, but despite being a fan of the actor’s work, he had trouble picturing him in the role at first as he was used to seeing him portraying more polished characters, not the guy crawling through Berlin’s underground under layers of blood and grime. The director was quickly won over, though.

“[Pine] does it with such vulnerability and he’s so exposed. I personally don’t respond so well to action films where the guy just walks around and looks cool all the time. I don’t believe it. I don’t think that’s how you feel when people shoot at you and when people want to kill you.”

Gillian Jacobs plays James’ wife, Brianne, who is dealt with the impossible task of making her husband’s paltry military earnings stretch far enough to provide for their son. Though Jacobs is best known for comedy, the Julliard trained actor was more than up for the task. To prepare them for their respective roles, Saleh had Jacobs and Pine watch Ingmar Bergman’s Scenes From a Marriage together.

“I spoke to a lot of wives of veterans and husbands, by the way, because it’s the same thing, of course, is that they sit by the phone and they wait for that fucking call, and it’s horrible. Because PTSD is not just the soldier, whether it’s a woman or man, it’s also the spouse and the kids.”

Saleh previously directed documentary films circling around the private military industry, which he calls, “a very murky world.” His first two documentaries dealt with covert operations — Sacrificio: Who Betrayed Che Guevara, which dealt with the CIA special operatives that hunted down the revolutionary leader and Gitmo, about Guantanomo Bay.

In the early 2000s, when he made the documentaries, Blackwater was on the rise and the public knew a lot less about that world than the almost nothing they know now. J.P. Davis’ script for The Contractor stuck out to him because James’ motives rang true.

James rightfully fears entering the private sector, knowing that it could place a target on the backs of his entire family and the work itself is a gray area. When it’s too late to turn back, James realizes the operation concerns a vaccine for a SARS variant, and he’s unclear on the motives of his mysterious higher-ups.

The film actually wrapped up shooting just before the pandemic, which was not what the director had in mind while he was making a film that questions how public health can be politicized and tossed aside in favor of profit. “Chris Nolan, I don’t think he knew that Putin was going to go into Ukraine when he started making Oppenheimer,” says the director.

The filmmaker wants viewers to take away one lesson as life imitates art and art imitate life, “Ask the follow-up question.”

The Contractor is in theatres this April 1 and will be available on Paramount Plus later in the year.