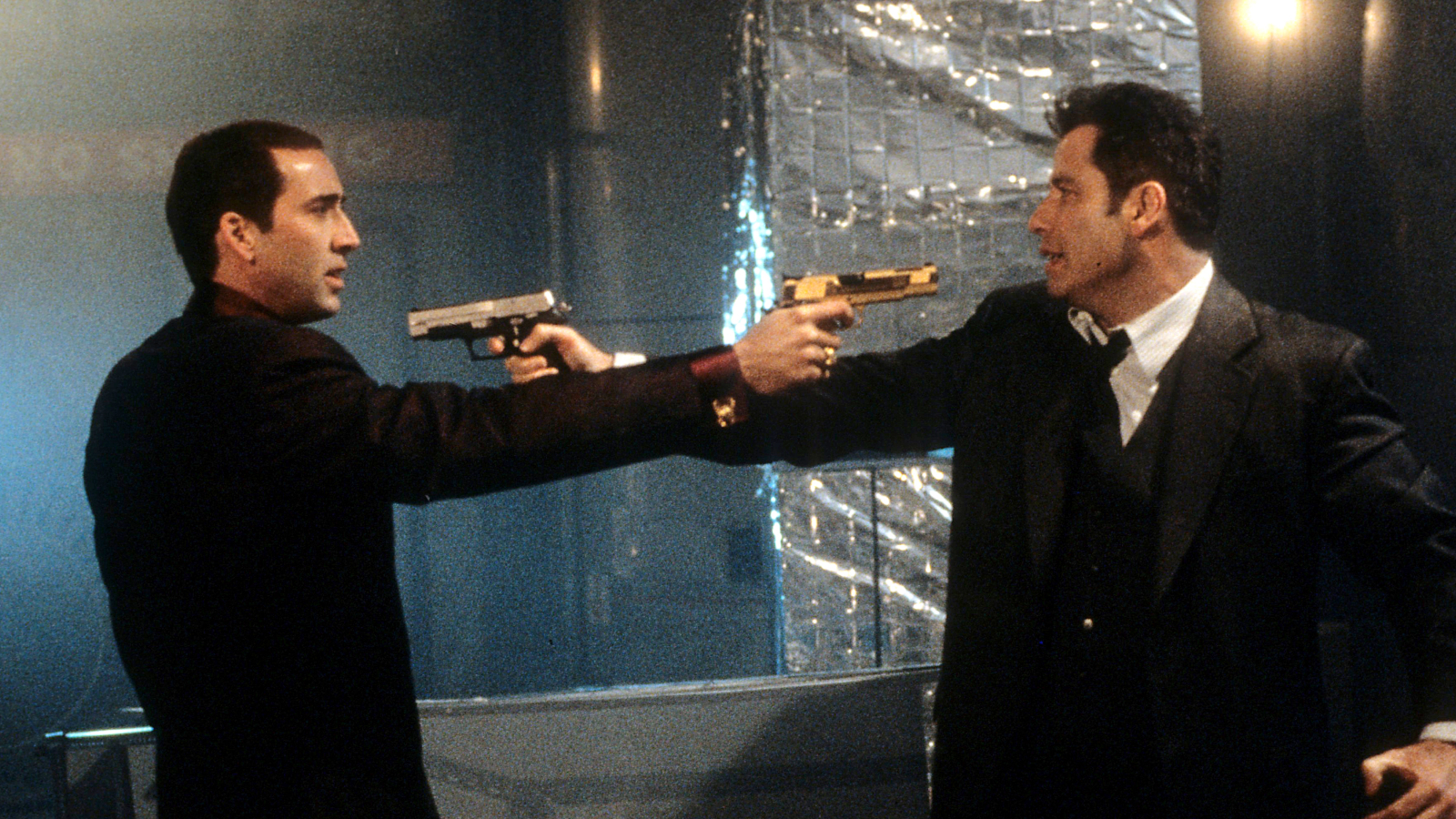 We really, really want Nicolas Cage and John Travolta to take Face/Off 2 … on.

The long pauses, Cage imitating and quoting himself, Travolta going from sincere law enforcement agent to trying to be as zany as Cage…there are oh so many memorable moments and quotable lines from the 1997 spectacularly loony/wacky/inspiring movie from director John Woo, and maybe the best movie to ever feature a forward slash in the title: Face/Off.

After quite a lengthy pause, it seems we might be on the verge of a sequel!

In 2021 Paramount Pictures confirmed that a second Face/Off film will be directed by Godzilla Vs. Kong director Adam Wingard. The news is recirculating as Face/Off 2 gains steam and even possibly moves toward the ever-important casting and filming stage.

As with other sequels and/or reboots that were made quite a while after the initial project, replacing the main cast and characters, and director, can make it a sequel in name only. Three names seem to be needed in order to make Face/Off 2 not merely a reality, but something that made the first Face/Off so special.

They are the multifaced, multidimensional, and role-swapping bizarro icons — Cage and Travolta — as well as the director bold enough to bring such a seemingly unreal and surreal storyline to a presentable reality: John Woo.

We already know that Woo is not attached to Face/Off 2, but what about Cage and Travolta?

Just last month, Cage did a Reddit AMA (Ask Me Anything) and the answers were what you’d expect and then some from him. From elegance, to thoughtfulness, to playfulness, and extremely poignant and intelligent answers.

One person asked Cage “would you do a Face Off 2?”, to which Cage gave a one-word answer: “Yes.”

OK, let’s scale back a bit, because there is much more to his answer than that. Let’s start with his copilot on the crazy train ride of a movie known as Face/Off : John Travolta.

The coolest part about Face/Off is how Cage plays the role of Troy and Travolta plays Archer, before they undergo a face transplant procedure and become one another. Once they switch places, with Cage now Archer and Travolta now Troy, the actors themselves switch who they are playing, taking parts from their own acting approach in their original roles and blending it with how the other played their role.

In the end Archer survives and we see Troy die. We know through this that Travolta’s Archer, after gaining his original face back, could in theory return for a sequel, but what happened to Cage’s Troy’s face after the ol’ switcharoo is unknown.

Was it saved? Thrown away? Put through a shredder? Is it on display in a museum as a testament to face-swapping technology? Also, did that technology get totally rebooted and has it been running rampant, like Mission Impossible, ever since 1997?

Of course, movies have a way of resurrecting characters, or playing a trick-out of some sort and saying they were on the verge of death but made it through, or some other medical marvel or villainous hack was able to revive them.

We haven’t really heard from Travolta on whether he’d want any part of a sequel. In fact, we haven’t heard much from him at all, personally or acting-wise since the disappointing Gotti came out in 2018.

On the other face, Cage has stated that, not just the one time mentioned above that, if he were to be asked, he potentially would be up for reprising a role in a Face/Off sequel.

While promoting his most recent film, The Unbearable Weight of Massive Talent, Cage said in an interview with comicbook.com that while another National Treasure movie seems to be off the table, another Face/Off with the original cast, not as a reboot, was still very much in play.

Cage even mentioned that even though it was originally announced by Paramount Pictures in 2019 that a new Face/Off would be created, that he holds producer Neal Moritz, who is attached to the new Face/Off, in high regard, and he would take a call from Moritz to talk about Face/Off 2.

“[A Face/Off sequel] I can talk about because, there have been some phone calls with Neal [Moritz], who I enjoyed very much working with on the first Face/Off,” Cage said. “He’s somebody, he’s one of the true, great producers in Hollywood. And, they have been making some calls. The other ones like National Treasure, I mean, their priority was a TV show. God speed to them. But, maybe Face/Off, maybe.”

It’s the double-maybe there that has us believing Cage would definitely take his face … off, again.

The ever-insightful and aware Cage was already ahead of himself and fans, though, saying that ultimately, it’s not his call, even if he’s interested, if nobody — say, Moritz — ever calls him about it.

In a recent interview with The Hollywood Reporter, Cage said that he hasn’t heard from anyone about anything directly when it comes to Face/Off 2.

“I have not heard hide nor hair about it. So often these things we read about are just conjecture without any base or foundation to it. I feel the same about National Treasure 3. It’s been 14 years. There’s no there, there. So, is it fun to think about? Sure. Would [Face/Off 2] be an exciting movie to make? Oh, hell yeah.”

Cage went on to voice his opinion that a reboot of any sort wouldn’t have his support, either.

“But John Woo was such a huge voice in that movie. It couldn’t be a remake. I think these filmmakers even said as much — that something like that would have to be a sequel,” Cage said.

Perhaps Cage, and the addition of Travolta, would in the end wind up finding a way for Woo to be involved. We get cameo actors all the time. Have we had cameo directors before?

While Travolta has not been on record about the sequel, it is know that as of now, Woo is not involved, but the current director attached to the project, Adam Wingard, has stated that the sequel will indeed not be a reboot.

Basically, we’re left to face facts that a sequel is happening, but neither Cage nor Travolta are attached to it as of now. Cage is willing, and even ready, and both the director and writer of the sequel plan to get his approval and blessing, and hopeful involvement.

However, while they will do the same with Travolta, we’re not sure where he stands just yet.

Travolta is currentl filming a new movie in Suffolk titled The Shepherd, a short film, in his own words, “based on a book by Frederick Forsyth that I’ve always loved.”

You could say that both actors have sported many different looks, or faces, during their long and illustrious careers.

Yet it seems that maybe the biggest dilemma could be that the duo don’t even remotely resemble each other at this stage of life, but then again, did they really look that much alike for the original?