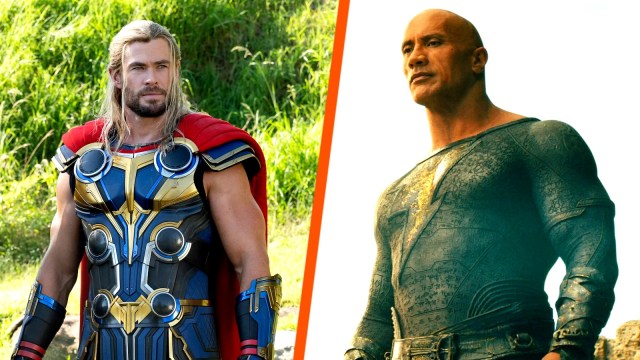 Images via Marvel and DC. Remix by Danny Peterson.

After a lighthearted Black Adam vs. Thor parody was signal-boosted by Dwayne Johnson, comic book movie fans are seriously considering how a rivalry between the DC and Marvel superheroes would actually play out.

Black Adam star Johnson seemed to tease Thor: Love and Thunder star Chris Hemsworth when he tagged the blond-haired Australian while sharing the humorous video on Twitter. The original video Johnson retweeted came from The Talk CBS host Akbar Gbaja-Biamila, who dressed as Black Adam knocking on a wall of which Thor, portrayed by Jerry O’Connell, was on the other side.

Upon retweeting the video, Johnson’s thoughts could only be conveyed with a crying-laughing emoji and a fist emoji, and of course, tagging Hemsworth and adding a Black Adam hashtag for good measure.

There were plenty of fans who were all for the “Big Boys” and apparent pizza fans to come to blows.

Another fanatic of all things comic book movies described a hypothetical crossover of Thor and Black Adam as “kick ass.”

But of course, plenty of people took the opportunity to side with either DC or Marvel, including those that believe the cinematic universe that brought the world Thor: The Dark World is superior.

Only the latest Johnson meme from Black Adam could summarize one fan’s feelings.

One commentator was simply convinced that because Johnson was able to get Henry Cavill back into the DC Universe as Superman, he could potentially make just about anything happen, including a crossover with Marvel.

For one Twitter user, the cold reality is that the God of Thunder would be a shoe-in in terms of dominating in a battle with the Man in Black.

Another clear DC fan was convinced Teth-Adam would be an unstoppable force against Thor.

With a comics expert like James Gunn as one of the executives at DC, as well as Johnson’s considerable ability to be persistent with movie studios bosses, maybe a Black Adam vs. Thor crossover film is not as far-fetched as it seems.

Check out Black Adam at a theater near you and decide for yourself.