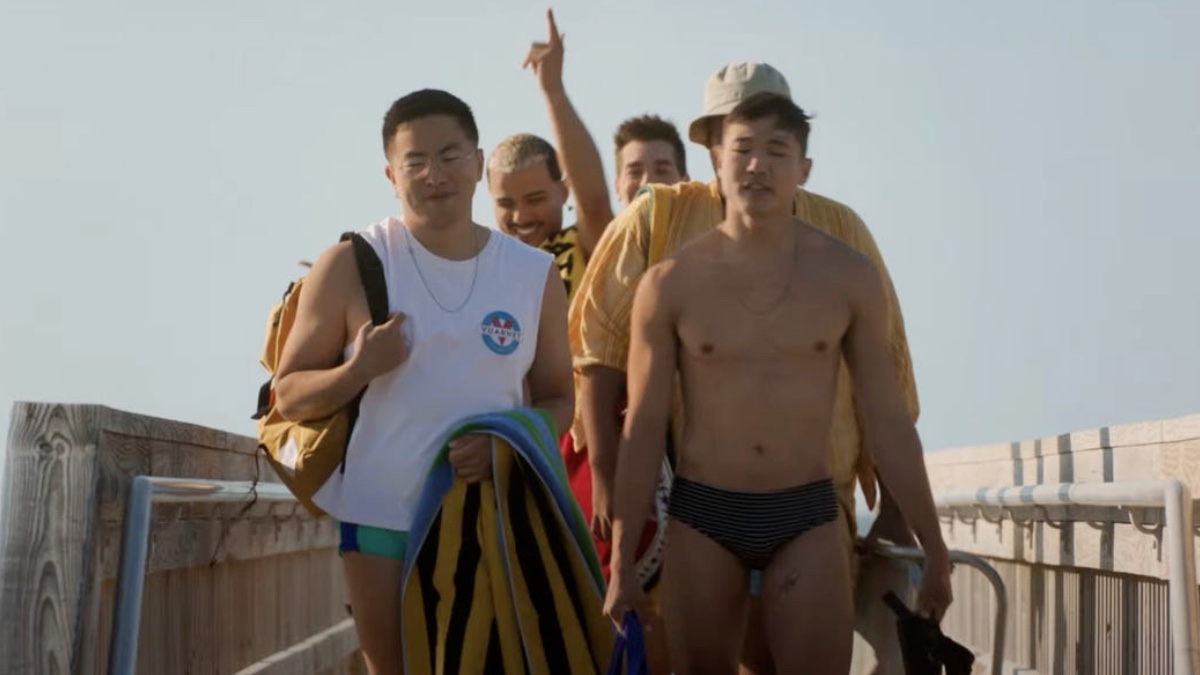 Fire Island, the gay rom-com starring Joel Kim Booster and Bowen Yang about a group of friends who embark on a weeklong vacation to the infamous gay village hotspot, was released on Hulu for the start of Pride Month last Friday to rave reviews. But despite the fact that the film, which seems to be nearly universally beloved, doesn’t mean that it’s immune to controversy.

As such, Fire Island became the subject of a viral tweet from author Hanna Rosin, who accused the movie of not passing the Bechdel test.

The Bechdel test, for the uninitiated, rates the representation of women in fiction. Originating from cartoonist Alison Bechdel’s 1985 comic strip, Dykes to Watch Out For, the criteria boils down to three rules: that a piece of work features at least two women, that those women who talk to each other, and that they have to talk about something other than a man.

“So [Hulu’s Fire Island] gets an F- on the Bechdel test in a whole new way,” Rosin tweeted on Monday. “Do we just ignore the drab lesbian stereotypes [because of] cute gay Asian boys? Is this revenge for all those years of the gay boy best friend?”

Aside from the obvious — that it’s hardly shocking a movie expressly about gay men wouldn’t pass a Bechdel test — Rosin gets into problematic territory by accusing a rather groundbreaking queer comedy of being nothing more than revenge fodder. The movie is literally described as “a pair of best friends set out to have a legendary week-long summer vacation with the help of cheap rosé and a group of eclectic friends.”

So it didn’t take long before Rosin’s tweet became ratio’d, which refers to the phenomenon when the likes a tweet receives are eclipsed by the quote tweets and mentions.

“Hanna this is tiresome because it’s not a good faith application of the Bechdel test, or rather, [Fire Island] fails rather intentionally,” reasoned actor and producer Emerson Collins. “You know that, so it feels like this is mostly for the reaction, because surely you’re aware that gay Asian men are rarely/never centered this way.”

The Las Culturistas (a podcast hosted by Yang and Matt Rogers, who also has role in the film) Twitter account pointed out that there are plenty of movies that actually fail the Bechdel test, wondering why Rosin picked on this particular film.

Comedian Doug Benson pointed out what should be obvious, that when a movie focuses on a marginalized group of people, it should be exempt from the Bechdel test.

Another user pointed out the fact that, again, the test itself was a punchline in a comic strip and wasn’t intended for critical thinking.

And then there were the spicier takes. NPR’s Aisha Harris marveled that somehow she managed to enjoy the movie, even though it wasn’t for or about her, and failed the test. “Crazy, I know,” she quipped.

Bettina Makalintal of Eater equaled the tweet with the experience of going to a women’s college in 2010.

Others imagined other things that would suspiciously fail a Bechdel test, such as a woman who appears to be on a gay cruise and backyard wrestling.

“Explaining to my wife and her boyfriend that our household doesn’t pass the Bechdel Test,” quipped podcaster Sam Adler-Bell.

Representation obviously matters when it comes to television and film, but cutting off the nose to spite the face is rarely a good turn.

Maybe the LGTBQ+ community should come up with a similar type of test, but instead, a piece of work must feature at least two queer characters who have to talk about something other than the problems of the straight leads. There, solved it for you!