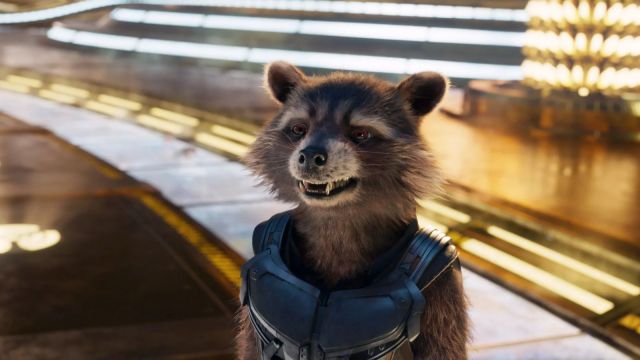 One of the long-running jokes about Rocket in the Guardians of the Galaxy films is his weird love of prosthetic limbs and eyeballs, and a fan theory gives a depressing reason why.

First introduced with a gag around stealing a prisoner’s leg, the joke then leveled up with him keeping a spare eyeball in his furry behind that Thor adopted in Avengers: Infinity War. Then doubled down again in Endgame with his fascination for War Machine’s many guns and prosthetic legs.

Now, a fan believes it’s all building up to a stark and grim moment in Guardians of the Galaxy Vol. 3 to create a perfect humanoid body.

Known to be upset about the fact he’s a strange raccoon-like creature pieced together by illegal experiments, it’s curious how much he’s looking for extra limbs. Everyone has their own kooky hobbies, but does this theory really stack up? Will we see human-android Rocket?

It’s a bit far-fetched, and is based almost entirely on speculation that Bradley Cooper is also voicing the High Evolutionary which hasn’t been confirmed as of yet: with Chukwudi Iwuji believed to be cast for that instead. There’s been confirmation from San Diego Comic-Con that a young version of Rocket will be seen in the film, almost surely to challenge Grogu’s stranglehold on plush toys.

The Guardians of the Galaxy Holiday Special is due on Disney Plus in Dec. 2022, while Vol. 3 is set for a cinematic debut in May 2023. Widely believed to be the end of the trilogy, it’ll be interesting to see if spin-offs will come from the threequel.