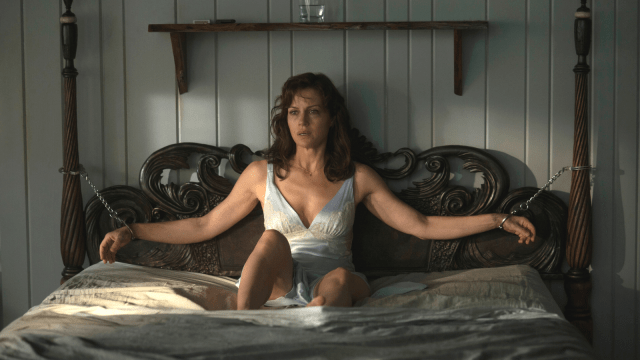 A genre dedicated to shocking audiences and playing with expectations, horror is perhaps best-placed for truly jaw-dropping surprise and twists, and the internet is celebrating some of the most radical ones put to screen.

Starting off arguably with Alfred Hitchcock’s Psycho, the genre has prided itself on leaving audiences with a mind-blowing finale: even if it’s often for the worst when it comes to the hard done-by protagonists. Flicks like Saw, 10 Cloverfield Lane, and The Sixth Sense all captivated audiences by absolutely throwing everything you knew out the window.

Reddit’s home of horror has piped up with plenty of suggestions for classics, favorites, and gems like that will keep you on the edge of your seat, before forcing you to pick your jaw up off the floor.

Really, you can’t talk horror and horror films without at least one Stephen King work popping up somewhere. Gerald’s Game is one of the more recent adaptations done, with the Netflix exclusive delightfully adapting the story and keeping a major shock up its de-gloved sleeve for audiences.

The Cabin in the Woods re-subjected the world to the popular meta angle that Scream popularized in the 1990s, and it’s well worth a mention for its truly brilliant ending, which has left many still pondering what on Earth was going on.

Lost Highway doesn’t just feature a terrific Nine Inch Nails track, it also masterfully uses the thriller and horror genres together leaving a memorable film for the ages. One of David Lynch’s most followed films, even if it was initially panned by critics. Now, it’s in the same discussion as Mulholland Drive for Lynch’s “best movie with a road motif in it” award.

Surrealist horror film Jacob’s Ladder is possibly the best Twilight Zone movie ever, and it’s not an official Twilight Zone movie. At least nobody died making it, so that’s good. It’s an excellent film which has surprisingly not spawned many imitators given its quality.