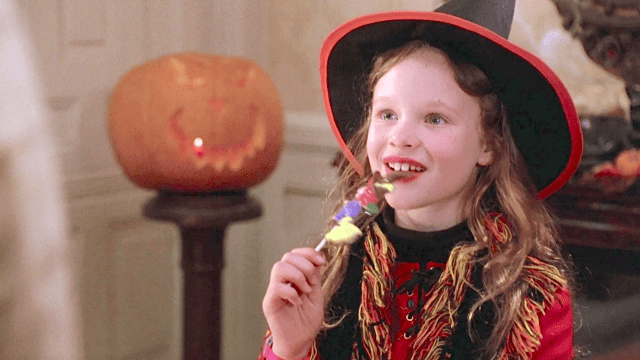 After decades, Hocus Pocus 2 is finally out for fans to devour. It has received mixed reviews, only brought back some of the original cast, and now one of the new stars has revealed that there was once a place for a former series cast member, had it worked out as intended.

In an article published today by Entertainment Weekly, Belissa Escobedo (who plays Izzy in the sequel) says that Thora Birch’s Dani Dennison was almost who Izzy and her friends went to for help once the Sanderson sisters are brought back to life. This was in an earlier version of the script that did not feature Sam Richardson’s Gilbert, one in which the girls would have gotten advice in an appropriate setting.

“She was going to be our schoolteacher,” Escobedo revealed to EW. “I remember talking to Anne about it being a thing where she was our teacher, and we went to her for help.”

Birch was apparently almost in the movie, but could not make it work due to scheduling conflicts with Netflix’s Wednesday. She later exited the production, and as director Anne Fletcher previously told Entertainment Weekly, it was hard to get the initial heroic leads back, as the sequel’s creative team was worried they might take the story off track but also didn’t want them to only be present for bit moments, either.

“It was very difficult to try to have them be a part of it because we did talk about it — painstakingly. You’re trying to stay on track with story, even if they came in as a cameo. People would say, ‘they could be in the background!’ And I’m like, really? You’re going to put the leads of the first movie in the background and be satisfied? You’re not going to be satisfied, you’re going to be angry.”

We gave Hocus Pocus 2 two-and-a-half out of five stars in our review here at WGTC. Writer Apeksha Bagchi says that the film’s plot runs “amok, amok, amok” and on Rotten Tomatoes, the movie is currently rated 60 percent fresh by critics based on more than 100 filed reviews. While critics have been kinder to it than they were the original, audiences rank it 55 percent rotten compared to the original’s 71 percent fresh audience score.

Regardless of how you feel about it, Hocus Pocus 2 is currently available to stream on Disney Plus.