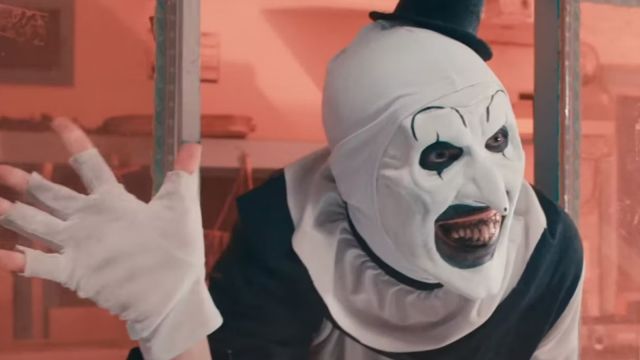 Now that Art the Clown is back to haunt our cinema screens and nightmares in Terrifier 2, it’s worth pondering: Just how did this creepy villain come back from the dead in the first place?

In case you’re not already familiar, David Howard Thornton’s Art the Clown was the main antagonist in 2016’s Terrifier. For most of the duration of the movie there is nothing in particular to indicate Art is supernatural in nature. Rather, he appears to be a mute and sadistic serial killer, albeit with some jaw-dropping makeup by way of rotting teeth and an unnaturally-pointed nose to make him appear even scarier. All of his kills are pulled off in a practical way that does not involve anything beyond our realm.

However, the rules for Art the Clown change at the end of the movie. Art shoots himself in the head at the end of Terrifier just as he is on the precipice of getting caught by the police. But he then reanimates from inside his body bag at the morgue and continues his killing spree.

What is the explanation for Art the Clown’s resurrection in the first Terrifier?

More context clues in Terrifier 2 offer up a long-awaited explanation for why Art the Clown can come back to life in the franchise — although you must read between the lines a bit. In Terrifier 2, the main protagonist is Lauren LaVera’s Sienna Shaw, and is dressed as an angel in the movie. What’s more, she is later killed by Art at the hand of her father’s sword. But she later gets resurrected by that same weapon. With Sierra’s outfit sporting angel wings and the character being positioned opposite Art the Clown, this would seem to point to the explanation that Art is actually a demon. Hence, he has the supernatural ability to resurrect from the dead, which he has done several times by the end of Terrifier 2. Therefore, it’s entirely possible that Art’s deformed face — such as his abnormally pointed-nose and rotting teeth — is actually what he looks like as a demon, with the white face paint being the only superficial alteration to his appearance.

Some of the finer details of Art’s origin are left to the imagination, of course, since we tend to fear that which we do not know. But considering Art only seems to make appearances during Halloween specifically, each year, the hypothesis that he is a demon seems to ring true.