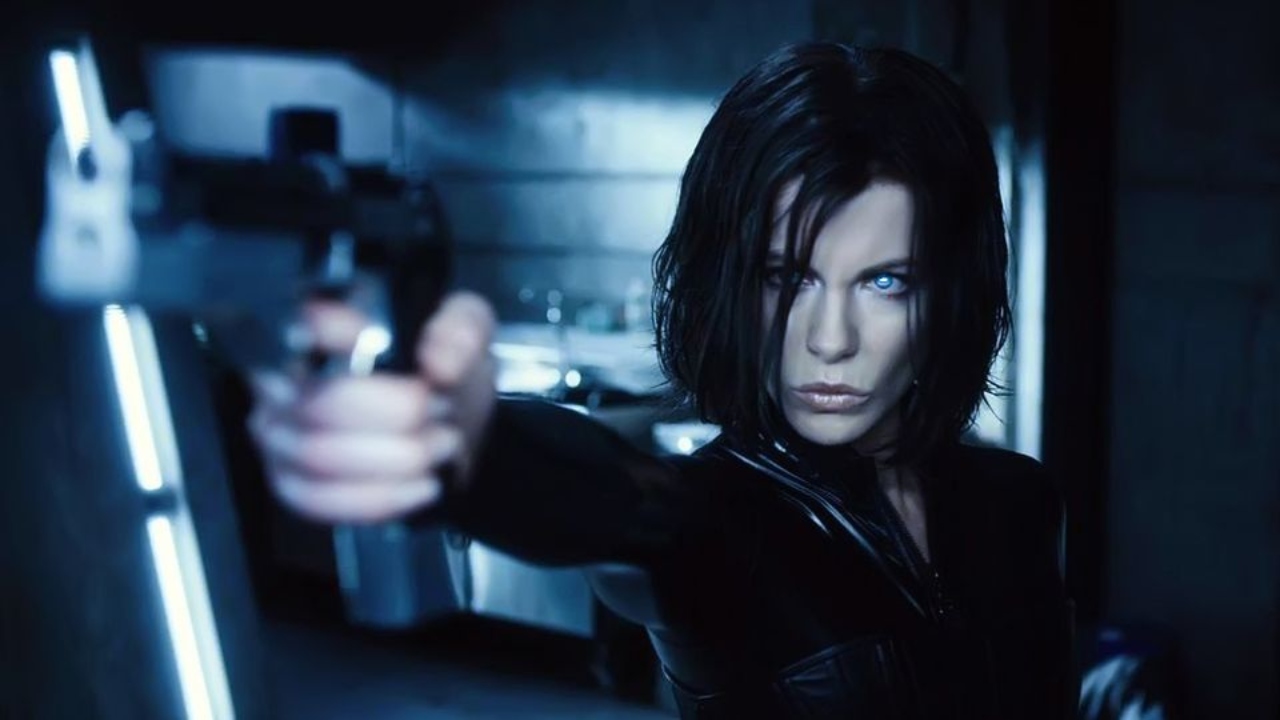 The Underworld series — created by Len Wiseman, Kevin Grevioux, and Danny McBride — is a modern-day Gothic fantasy saga of epic proportions that tells the age-old tale of an ongoing feud between vampires and moon-beasts known as Lycans. Selene (Kate Beckinsale) ⏤ a Vampire “Death Dealer” and the very first Vampire-Corvinus Strain Hybrid ⏤ finds herself at the center of the conflict, born only to wipe out the entire Lycan species. She has dedicated herself to the extinction of Lycans ever since becoming a Vampire, and Underworld chronicles Selene’s arduous journey from Death Dealer to omnipotent Vampire Elder.

First released in 2003, Underworld’s eight-part storytelling spans 13 years, concluding ambiguously with Underworld: Blood Wars. Although Beckinsale has officially ruled out a sixth live-action installment, Underworld fans can always relive the mythical mayhem with endless rewatches. Despite Underworld kicking off the franchise in 2003, the chronological order of the Underworld films differs from their respective theatrical release dates. For newcomers and longtime fans, here’s a guide on how to watch all the Underworld movies in sequential order per the cinematic timeline of events.

As the prequel to Underworld (2003), Rise of the Lycans details the origins of Lycans and events that transpire to give rise to the Vampire-Lycan war. It is the third (chronologically, the first) installment in the Underworld franchise, but also the only film to not follow Kate Beckinsale’s protagonist Selene throughout. Rise of the Lycans focuses on Lucian, the first Lycan, who was raised by Viktor, a Vampire elder. When Lucian falls in forbidden love with Viktor’s daughter Sonja in real Romeo & Juliet fashion, the betrayal leads to Sonja’s untimely death and subsequently sparks the Vampire-Lycan war.

When Viktor is revealed to have survived the injuries obtained during a fight with Lucian, the opening scene of Underworld plays thereafter, wherein Vampire Kraven reveals to Selene that it was Viktor who killed her family, not Lycans. Selene dismisses these claims as false, unaware of the truth. With Kate Beckinsale’s Selene absent from the main cast list, Rise of the Lycans sees Michael Sheen, Bill Nighy, Rhona Mitra, Steven Mackintosh, and Kevin Grevioux steal the limelight as Lucian, Viktor, Sonja, Andreas, and Raze, respectively. For an in-depth look at where it all started, Rise of the Lycans is the first pit stop on the road to the chronologically correct Underworld timeline.

Underworld: Endless War was released as an animated feature film split into three tie-in stories, all occurring during the overarching Underworld narrative of its live-action counterparts. Each film tells a different story — hence its division into Part I, Part II, and Part III — and takes place during different periods of canonic history to highlight new events within the Underworld mythology. Endless War was made purchasable as part of the Underworld Trilogy: The Essential Collection for Underworld, which includes Underworld, Underworld: Evolution, and Underworld: Rise of the Lycans. These three stories also set up the events in the next film in the series (according to release, not chronological order), Underworld: Awakening (2012).

Part I is set after the events that occur in Rise of the Lycans — in 1890 — where Selene investigates three Lycan brothers terrorizing Paris and plotting to overtake the Vampire Coven situated nearby. When the Lycan siblings are informed that Selene is pursuing them, they plan to ambush her. Naturally, Selene — being an experienced Death Dealer — expects as much and manages to kill Darius, the oldest Lycan. Vregis and Krandrill, the younger Lycans, flee the Vampire Coven estate and swear revenge against Selene. Although Rise of the Lycans is never explicitly mentioned, it can be inferred that Selene had only begun hunting Lycans recently and therefore signifies that the Vampire-Lycan war was in its early stages. Endless War can be easily forgotten, but for truly seamless continuity, it should be included in any Underworld binge-watch.

Following on from Part I, Endless War: Part II opens nearly 80 years later — in 1967 — and Selene has returned to Paris to investigate reports surrounding the remaining Lycan brothers. As an extra incentive to revisit Paris, Selene is asked to attend the “Crimson Moon ceremony” held at the old mansion and to protect Lord Clovis. Seeking to exact revenge on Selene for murdering Darius decades earlier, Vregis and Krandrill gatecrash the ceremony and eliminate Lord Clovis, waging battle with Selene, who inevitably murders Vregis and manages to sever Krandrill’s left arm from his body with a shuriken before he flees.

Part II stars the voices of Laura Harris as Selene, Mark Oliver as Michael Corvin, Brian Dobson as Vregis, Paul Dobson as Krandrill, and Trevor Duvall as Kraven, Lord Clovis, and Darius from Part I.

The first Underworld film to be released and the fourth film chronologically, Underworld introduces Selene (Beckinsale), a Vampire Death Dealer who hunts Lycans in the midst of a Vampire-Lycan war. She finds Michael, a human who gets bitten by a Lycan, but a strong romantic attraction to him forces Selene to decide between carrying out her duty as a Lycan-killer or sparing Michael and going against her Vampire clan. Joining Beckinsale, Scott Speedman portrays Michael Corvin with Bill Nighy as Viktor, Michael Sheen as Lucian, Shane Brolly as Kraven, and Sophia Myles as Erika.

Underworld explores more deeply the ongoing feud between Vampires and Lycans, setting up the prequel and giving away enough detail for the narrative to be coherent even without a backstory. Not only does it introduce Selene and Michael’s forbidden love affair as a reenactment of Lucian and Sonja from decades before, but it ties in Viktor’s involvement and Kraven’s betrayal in an all-encompassing showdown. In the end, Underworld makes preparations for the franchise to continue with Selene and Michael as fugitives and enemies of both Vampires and Lycans.

Three years after Underworld, its sequel Underworld: Evolution picked up where its predecessor left off. Beckinsale and Speedman reprise their roles as Selene and Michael, respectively, joined by Tony Curran as Markus Corvinus and Derek Jacobi as Alexander Corvinus/Lorenz Macaro. In Evolution, Vampire elder Markus hunts down Selene and Michael, who have since been branded outcasts by both the Vampire and Lycan races. More is uncovered regarding the origins of Vampires and Lycans, as it is revealed that Markus was the first Vampire and Markus’ twin brother William — one of the three sons of Vampire and Lycan forefather Alexander Corvinus — was the first Lycan. Selene and Michael’s budding relationship blossoms and Selene becomes a Vampire-Corvinus Strain Hybrid after drinking Alexander’s blood.

When Evolution concludes, Selene discovers that she is immune to sunlight, which is lethal to Vampires, therefore boosting her immortality and tolerance against common Vampire-Lycan weaknesses. Although the second Underworld film to be theatrically released, Evolution is the fifth film chronologically. It was directed by Len Wiseman, the co-creator and director of Underworld who also produced the follow-ups.

Endless War: Part III rounds off the animated trilogy, continuing on from Part II, which ends with Darius and Vregis dead and Krandrill swearing revenge on Death Dealer Selene. Set in 2012, following the death of Alexander Corvinus (occurring in Underworld: Evolution), Selene has returned to Paris to finish off Krandrill after maliciously amputating his left arm. Aided by Michael Corvin, Selene tracks Krandrill, who had anticipated their arrival and planned to lure them to the Tati hotel and kill Michael with Selene as a witness as retribution for her killing Darius and Vregis. Ultimately, Selene and Michael manage to overpower and murder Krandrill, who mockingly warns Selene that her “kind” is being hunted and that she will join him and his brothers in hell.

Part III sees the return of all the previous voice actors and the Underworld: Endless War trilogy was directed by Juno John Lee, written by Jon Schnepp and supervised by Len Wiseman. The animated film was released by Sony Pictures Entertainment, clocking in at just 18 minutes long with each story lasting about five minutes each. In a voiceover, Selene closes out the trilogy, reflecting on Krandrill’s final words. She says, “He might be right. We are the Hunted. But as long as I have him (Michael), I’m all right. As long as we’re together, I can live forever…”

The penultimate live-action film in the Underworld series, Awakening sees Beckinsale reprising her role as Selene, joined by Theo James as David, Michael Ealy as Detective Sebastian, and India Eisley as Eve. Awakening ties up the loose ends of Selene and Michael’s child, Eve, who was born as a purebred Vampire-Lycan hybrid and the first of her kind. Set after the events of Evolution (somewhat discounting Endless War: Part III), the humans — including the government — have now become aware of the existence of Vampires and Lycans. Selene and Michael are captured by humans who aim to harness and replicate their powers; Selene is preserved in cryogenic suspension for 12 years and awakens to both species being hunted to the brink of extinction. Awakening primarily follows Selene and Michael breaking free from the facility and rescuing Selene’s daughter, Eve.

Bringing about a definitive end to the Underworld series, its final film (chronological in both theatrical release and timeline placement) sees Kate Beckinsale’s swan song as Selene, joined by Theo James as David, Lara Pulver as Semira, Tobias Menzies as Marius, Bradley James as Varga, Peter Andersson as Vidar, and James Faulkner as Cassius. Underworld: Blood Wars sees the Lycans targeting Selene’s daughter, Eve, hoping to use her Hybrid blood to build an army of Vampire-Lycan Hybrids. Meanwhile, the Vampires are on the verge of annihilation, seeking revenge for the death of Vampire elder Viktor.

Blood Wars reveals some previously undisclosed information regarding David, who turns out to be the son of Grand Elder Amelia and therefore the legitimate heir to the Eastern Coven. Meanwhile, David denounce Semira, who plots to overthrow the Elders and claim ownership to the Eastern Coven. Elsewhere, Selene encounters Markus, who supposedly overpowers and kills her, eventually producing a domino effect that leads to the Eastern Coven coming under attack by Lycans, forcing the Vampire clan to retaliate. Selene miraculously survives, returning to aid the Vampire clan and murder Marius as revenge for Michael Corvin’s death by his hand. In the aftermath, Selene, David, and Lena are chosen as new Elders and Eve reunites with Selene.