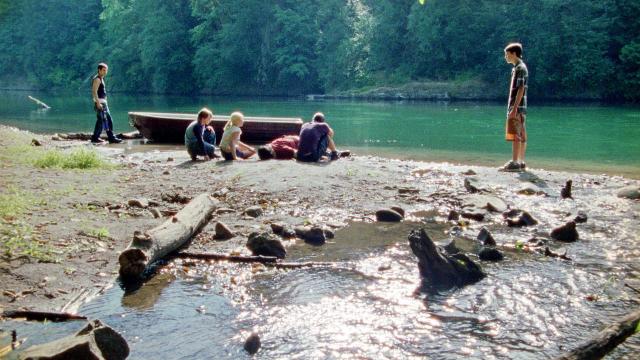 via Focus Features
Review of:

In 99 percent of cases, any movie that involves a group of young kids or teenagers heading off together on an adventure is guaranteed to deliver fun-filled, wholesome family entertainment. However, writer and director Jacob Aaron Estes’ haunting Mean Creek exists at the complete opposite end of the spectrum.

There’s a disparate band of characters from different backgrounds with wildly opposing personalities, savage banter being thrown back and forth, and even a voyage of self-discovery to be found along the way, so there’s a reason why so many reviews at the time of the film’s 2004 release were quick to point out the stark and ultimately harrowing spiritual similarities Mean Creek held with Richard Donner’s beloved favorite.

Josh Peck’s bully is invited along on a journey into the woods with his peers, where he begins to peel back the layers and reveal why he’s decided to spend his life making other people’s lives a misery. Unbeknownst to the actor’s George, he was allowed to tag along for the sole purpose of being humiliated, before things take a devastating turn for the worse.

Existing somewhere between The Goonies and Stand by Me but completely unique and utterly riveting from start to finish, the widely-acclaimed and often uncomfortable psychological thriller earned a mere $802,000 at the box office during its initial release. That hasn’t stopped it from becoming an under-the-radar favorite, though, with a Reddit thread currently lavishing Mean Creek in praise that it fully deserves.

It’s a difficult watch at points, but an undeniably fascinating one, and it deserves to be held up alongside the rest of the coming-of-age classics as one of the subgenre’s finest examples.