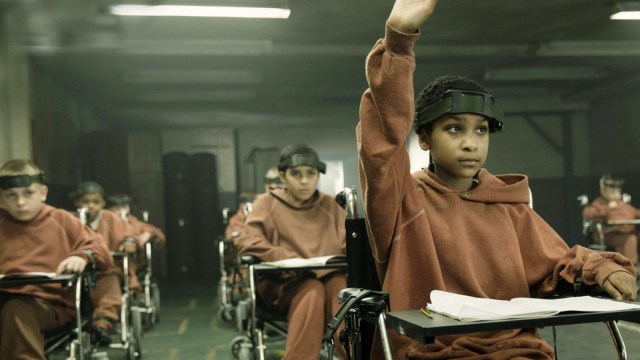 Audiences aren’t new to the experience of a zombie-infested post-apocalyptic world. Be it the Korean Blockbuster Train to Busan or the AMC series The Walking Dead, fans have been treated to many slices of bone-chilling undead invasions following a battle between the zombies and the humans.

Colm McCarthy’s 2016 British sci-fi horror film The Girl with All the Gifts is an adaptation of Mike Carey’s 2014 novel of the same name. With an intricate storyline featuring familiar genre tropes like cannibalism, gore, and intense pursuits, the movie was touted as one of the genre’s best of that year.

What is the movie about?

The plot is set in a dystopian future following the collapse of human civilization where almost half of the human race was decimated by a fungal disease and the survivors were reduced to a zombie-like state known as the ‘hungry’.

This includes the film’s protagonist Melanie and a group of other children who were incarcerated due to their cravings for human flesh. Their brains, imaginative capabilities, and ability to think are subjected to continual experimentation by a group of scientists.

The movie underlines the emotional bond between Melanie and her teacher Helen who, unlike the others, never treated her as an ‘untouchable’. Six years on from its release, the movie has received an unexpected late breakthrough, becoming a streaming hit on Netflix and acquiring a place in the top 10 in 22 countries.

Will there be a sequel?

A successful production often raises curiosities and questions about a sequel and The Girl with All the Gifts is not an exception to this. In 2017, Carey published The Boy on the Bridge, a prequel and sequel to the companion novel.

The story is set almost a decade prior to the events of the first book which focuses on the original mission of Rosalind Franklin and the ensuing events leading to the state of Melanie and the other children that we get to witness in the movie.

While any confirmed news about the movie’s sequel hasn’t been released yet, author Mike Carey has stated that the story isn’t over yet. In an interview with CBR in the same year, Carey mentioned that he is planning to write more books that would follow his original masterpiece. He said,

“I’m definitely not finished. After the book came out, it was very successful. I talked with my publishers who asked me if a sequel is possible and I said no, because if you think about how the story ends, the sequel would be a completely different genre. It would be about the politics and the sociology of making a new world and society so it wouldn’t add up. But it occurred to me that you could go backwards in time because the novel is set about 20 years after the breakdown of society; and the movie… about 10 years after.”

There have been no detailed official announcements about The Boy on the Bridge being adapted, but given the success of The Girl with All the Gifts we’re not ruling anything out.