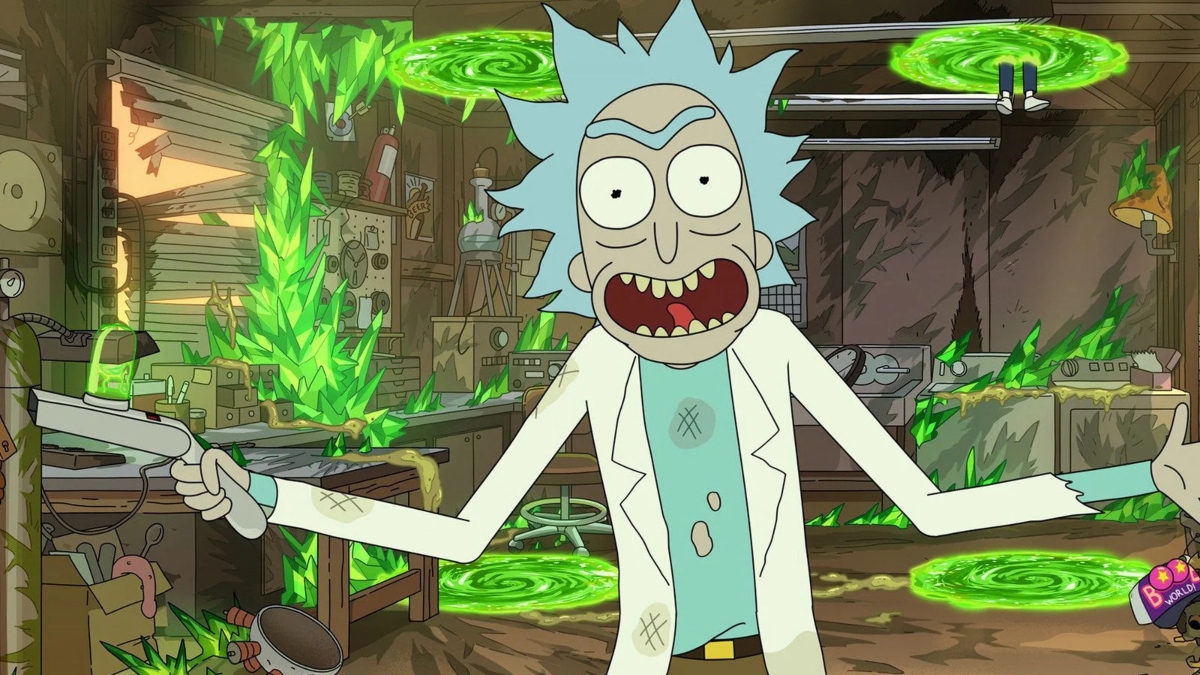 Rick Sanchez of Dimension C-137 — the mainstream Rick of the AdultSwim animated comedy series Rick and Morty — has often been cited as the “smartest man in the universe” by many an ally and adversary. He’s largely regarded as an anti-hero, generally only helping others when the situation offers him personal gain. Rick is — in no uncertain terms — a mega-genius whose complex inventions, hare-brained schemes and apparent recklessness often put his grandson Morty in mortal danger. Rick is an inventor and inter-dimensional traveler whose IQ, according to research conducted by Express, is “above 300” as “the highest IQ ever recorded was William James Sidis, at 300,” and “if Rick is the smartest man in the world. He is over 300.” That being said, Rick Sanchez is virtually untouchable, even the Citadel of Ricks couldn’t compete with his intelligence. Perhaps one of the only individuals to ever mirror — and sometimes even exceed — Rick’s genius would be the tyrannical dictator known as Evil Morty.

Marvel’s MCU is chock-full of geniuses. From Tony Stark to Reed Richards, there’s a whole host of brilliant, sharp-witted characters whose smarts might rival that of Rick’s. However, Rick Sanchez doesn’t just boast an incredible mind, he’s also fairly spry for an old man, especially one driven by rage, trauma and — more significantly — lots and lots of booze. Given everything we know about Rick Sanchez, could anyone in the MCU defeat him in battle? It’s only the nature of said battle — brains or brawn — that determines the victor, but let’s perhaps narrow down the contenders.

Let’s start with the most obvious choice. In many ways, Tony Stark is the MCU’s version of Rick Sanchez; he’s a genius, billionaire, playboy and philanthropist, and while Rick isn’t necessarily wealthy nor charitable, he’s definitely an ingenious womanizer, so two out of four ain’t bad. Stark is a hot-headed alcoholic, which is an apt description for Sanchez as well.While Rick invented the portal gun, a dream inceptor, a shrink ray, his space cruiser and many more weapons/machines. As for Stark, he survived his father, Howard Stark, to inherit Stark Tower, invent the Iron Man armor and become a full-time crime-fighter. There’s no telling who would win between Rick and Tony, but it would undoubtedly be a battle of the brains for the ages.

Ah, the age-old debate of magic vs. science. Normally, it would be argued that science trumps magic every time because science exists and magic doesn’t, but in the MCU, anything goes. We’re speaking hypothetically in the sense that Rick Sanchez would be transported to the MCU, not the other way around, so in Marvel’s fictional imagination, magic reigns supreme. That fact puts Wanda Maximoff in the more favorable corner. In the end, Rick has all his gadgets and gizmos, but Wanda controls the Dark Magic, known as Witchcraft, which rivals the combined powers of Doctor Strange, Wong and all the students of Kamar-Taj — as seen in Doctor Strange in the Multiverse of Madness. That spells trouble for Rick, who doesn’t rule any magical domain and therefore relies solely on technology, which — as we know from real-life experience — isn’t always reliable. Machinery can be faulty, whereas magic — generally — isn’t as flimsy. Wanda therefore stands a reasonable chance to take on Rick in a one-on-one.

For similar reasons to Wanda, the God of Mischief himself depends on sorcery as his weapon, which he acquired from his Jotunn physiology, as well as magic learned from both Frigga and his own practices. He also benefits from his heritage as a Frost Giant, which makes him far more durable than the average Asgardian. After all, Rick is mortal. It isn’t that he can’t be killed, it’s just that no one has succeeded in killing him yet. Since Loki can go toe-to-toe with other mystical beings, it shouldn’t be too strenuous for him to handle a mortal like Rick. As Loki has already proven in Avengers, humanity is at the mercy of the gods, and if it weren’t for a last ditch effort from Iron Man, New York would have been subjugated by the Chitauri. As for Rick, he’s formidable in that he’s faced many an intergalactic being before and still managed to match their strength. It would be bold to assume that Loki would straight-up annihilate Rick, but the old timer’s got some competition here.

He’s the God of Thunder. Need we say more? If Rick Sanchez has reasonable preparation time, he’d probably squash Thor like a bug, but if the deity manages to get the drop on Rick, it’s lights out immediately. Theoretically, Rick could use his portal gun to summon a portal to another dimension, drop Thor off at the pit-stop, then leave him there to rot in a foreign land. However, Thor has the immeasurable power of lightning on his side, so if he’s able to fry all of Rick’s technology, that reduces him to nothing more than a mere mortal man. There’s a few variables to this match-up than it first seems, especially considering Rick can invent pretty much anything, so there’s nothing stopping him from inventing a device capable of endowing him with the same physical strength and endurance as Thor. Again, one must consider that Rick needs to have studied Thor extensively to be prepared for some such scenario, but it’s entirely possible for the God of Thunder to best even the greatest scientist in every known universe.

There isn’t many individuals who can brag obtaining a Ph.D, but Victor Von Doom is one of them. The Latverian native is considered to be one of the most brilliant minds and scientists on planet Earth, which doesn’t quite compare to Rick’s status as the most intelligent being in the galaxy, but still. Just like Wanda Maximoff, it’s another question of science vs. magic, which no one can ever truly answer. There’s so much speculation as to whether or not magic trumps science or vice-versa, but it’s safe to say that both are infinitely powerful in their own right. Von Doom, at one stage, was even a candidate for Sorcerer Supreme — a title currently held by Wong in the MCU — and he’s come to a head with both humans and cosmic, otherworldly beings. He’s got the experience to match that of Rick, plus he’s gone toe-to-toe with not one but four super-humans in the Fantastic Four, so he’s definitely got that slight edge over Rick. In summary, Von Doom is on-par with Rick’s intelligence and his magical abilities are not to be underestimated.

We’ll admit, there’s times where Doc Ock has struggled to best Spider-Man, but we’ll give him the benefit of the doubt, especially considering how unmatched his genius truly is. It isn’t emphasized nearly enough in the live-action adaptations with Alfred Molina, but Doc Ock is made even more unstoppable by his complete absence of morality. Once his mind becomes victim to the sentient robotic arms he’s built, there’s truly no telling how powerful he could be. It sounds like a cliché, but the only limit is his imagination; the more he can invent, the stronger he becomes. Granted, Rick follows that same principle, but as the old saying goes, “two hands are better than one,” and in this case, four arms are better than two. Now, obviously Rick could just give himself four, eight, maybe even ten arms. He turned himself into a pickle, so… all bets are off. Still, Doc Ock has an advantage from fighting Spider-Man, who’s extremely smart, but still beneath him. Plus, without his failsafes, Rick — just like anyone else — wouldn’t be able to do a whole lot if he can’t even move his limbs. That’s checkmate, right there.