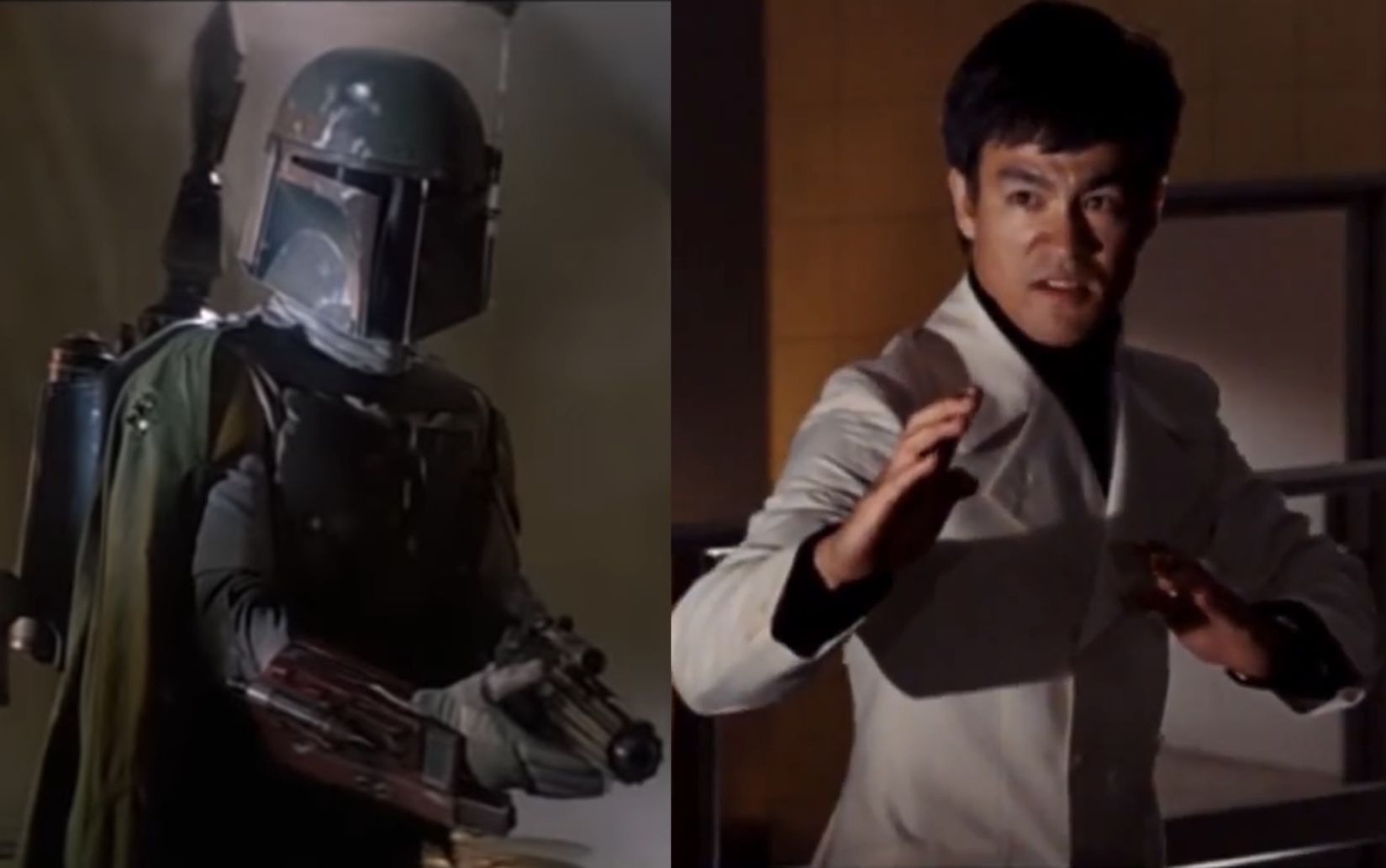 As I looked through IMDb at all of the actors who have ever played Boba Fett, one movie popped out to me because of its famous Bruce Lee scene. I searched online to see if anyone else realized that Boba and Bruce were in a film together and no one seems to have noticed this before, but you know what they say, “We got this covered!”

Who is Boba Fett?

For those of you who don’t know who Boba Fett is, then please remove the rock you’ve been living under. Due to the character’s decades-long popularity, he was finally given his own Star Wars series on Disney Plus in 2021 called The Book of Boba Fett.

In the Star Wars universe, he’s considered the greatest bounty hunter in the galaxy. Boba Fett first appeared alongside Darth Vader at an actual parade in California in September of 1978 and then made his first storyline appearance in the Star Wars Holiday Special a couple months later during a short animated portion of the show. In it, he befriends Luke Skywalker with the intent to find the location of the rebel base. His plans are thwarted, but his connection to Darth Vader is revealed.

Then, in the film The Empire Strikes Back, Vader invites Boba Fett to find Han Solo, who had just escaped the Empire’s grasp. Boba is looking for Solo in order to collect a bounty that Jabba the Hutt put on him for costing him big money in a spice smuggling job gone wrong. Vader wants to capture him in order to lure Luke Skywalker. As you may know, Boba actually succeeds in capturing Han Solo and, before the film’s ending, he takes off to deliver Solo, frozen in carbonite, to Jabba the Hutt.

Early in Return of the Jedi, we receive confirmation that the delivery was successful, as Solo is indeed still frozen and is in Jabba’s Palace. The infamous gangster even claims that Solo is now his favorite decoration. Clearly, Boba Fett can get the job done. This is also likely a part of why he’s popular. Not only is he mysterious and has cool-looking armor, but he’s a villain who doesn’t fail at his task.

He has since appeared in countless Star Wars stories and has shown up as a kid in the prequels and in the Clone Wars series. He has most recently shown up The Mandalorian before getting his own show, both taking place years after the events of Return of the Jedi.

Who is Bruce Lee?

And then there’s Bruce Lee, a real human from this galaxy. Lee was a child actor in Hong Kong before moving to the U.S., where he began teaching martial arts, including his own martial art that he created called Jeet Kune Do. During this time, he managed to appear in TV shows in the mid-to-late-1960s, with his biggest role being Kato in The Green Hornet series from 1966-67.

He also portrayed Kato in two episodes of Batman (with a very brief appearance in another episode). The storyline is remembered for the Green Hornet and Kato fighting Batman and Robin to a draw. The rumor has always been that the initial script of the fight didn’t end favorably for Kato as was supposed to lose to Robin but Lee insisted that Kato would not lose to the Boy Wonder and thus a draw was decided upon. Burt Ward, who played Robin, thought very highly of Lee and praised him for being “a really great guy.”

In 1970, Lee struck a movie deal in Hong Kong with Golden Harvest and starred in The Big Boss in 1971, which broke box office records there. Those records only lasted until his next film, Fist of Fury, was released in 1972.

After starring in, directing, and writing Way of the Dragon, Lee then starred in a Hollywood-Hong Kong collaborative feature in 1973 called Enter the Dragon, which helped bring martial arts films to mainstream America and beyond (Lo Lieh’s Five Fingers of Death being the true intro to such films for American audiences earlier that same year). For a more detailed look at his martial arts films, check out our ranking of Bruce Lee’s iconic films.

Lee’s untimely death in 1973 shook the world. He had been the first star of a Hollywood kung fu production, had taught martial arts to Americans (something considered a no-no by many other Chinese martial artists then), and had inspired countless people. His impact was tremendous and is still felt today. More so, he was an exceptionally good-hearted and good-minded human being who offered so much more than just a martial arts lesson.

Bruce and Boba, Boba and Bruce

Now, imagine the incredible Bruce Lee in a film with Boba Fett. Obviously, it wasn’t possible considering that Bruce passed away four years before the original Star Wars film was released. However, it doesn’t mean that Disney can’t make a Bruce Lee type of character to have a journey with the galactic bounty hunter. I think we’re all for that scenario.

However, Bruce Lee did appear in a 1969 Paul Bogart-directed movie called Marlowe. The film actually stars James Garner, the legendary Rita Moreno, and Caroll O’Connor, who later played Archie Bunker in All in the Family. The movie is based on the Raymond Chandler novel The Little Sister, and the main character, Philip Marlowe, is a private detective who gets involved in trying to find a missing person only for the mob to try and scare him off the case.

Marlowe, played by Garner, doesn’t listen to the mob. They send a man named Winslow Wong, played by Lee, to pay Marlowe cash to steer clear of the case. The scene is well-scripted, with Marlowe asking Wong who sent him and Wong responding by saying, “A man who’d rather spill money than blood but also a man who would not mind spilling blood if he has no other choice.”

When Marlowe refuses, Wong shows his skills and utterly destroys Marlowe’s office in what is now the film’s most memorable scene. Take a look at the video below to watch Lee’s brief but destructive display of martial arts. Maybe the best part is that after he takes a mere 10 seconds to destroy the office, he puts on his shades and leaves.

Wong later appears at a restaurant where Marlowe is enjoying dinner high atop a skyscraper. This is when Wong quite oddly and humorously meets his end. The film also has two actors who would be famous for doing respective voiceovers. One of them is William Daniels, who plays Mr. Crowell in the film. Daniels would be the voice of K.I.T.T. on the 1980s hit show Knight Rider starring David Hasselhoff. K.I.T.T. was the talking car that Hasselhoff’s character drove. Daniels later became known as sixth grade teacher Mr. Feeney on Boy Meets World, later reprising the role in Girl Meets World.

Daniels once appeared in the show Ironside, a popular series that ran for eight seasons from 1967-75. Daniels shows up in an episode that also featured James Hong, one of the most prolific Chinese actors in Hollywood. Ironside is the same show that Bruce Lee also once appeared in (albeit in a different episode). Check the video below for Lee’s brief appearance on that show.

The other actor who apepars in the film who would later be known for a voiceover, amongst other things, is Jason Wingreen. As Star Wars fans know, Wingreen is the original voice actor for Boba Fett in Empire Strikes Back and Return of the Jedi. Wingreen’s voice was erased for the updated versions of the movies and replaced by Temuera Morrison, who played Jango Fett (and now plays Boba Fett in The Book of Boba Fett). Wingreen’s voiceovers have a much more cunning tone to them, which you certainly wouldn’t think of when seeing Wingreen himself.

In Marlowe, he appears in two scenes as an unnamed character at a store that develops films called “Benson’s Camera Shop.” We assume he is meant to be Benson, but his role is uncredited, hence why this Boba Fett/Bruce Lee connection has likely gone under the radar (though IMDb notes Wingreen in this film as the “camera store clerk”).

Wingreen’s two scenes are obviously nothing like Lee’s two scenes in the film. Wingreen’s first scene is when he answers a phone call at the store, which is from Marlowe inquiring whether or not his film has finished being developed. In the story, Marlowe actually found the claim ticket for the film at a murder scene he was investigating. The film is owned by Mr. Hicks, the murder victim.

Wingreen is seen shortly thereafter when Marlowe goes to actually pick up the film pretending to be Mr. Hicks. Wingreen has a few lines collectively in these scenes, which makes one question why his role was uncredited, but you would never think that this was the voice of Boba Fett, which certainly says a lot about his voice acting ability.

Wingreen was in the midst of a lengthy television career, spanning 40 years and over 200 appearances. His credits include The Twilight Zone, The Man from U.N.C.L.E., Mission: Impossible, Bonanza, Ironside (no, not Bruce Lee’s episode), and even Seinfeld.

Wingreen also appeared 25 times on All in the Family, alongside the co-star of Marlowe, Carroll O’Connor. He appeared 93 times in its spinoff series called Archie Bunker’s Place.

During World War II, Wingreen served in the Armed Forces (Boba Fett in WWII?!) and when he returned, he became one of the founders of the Circle in the Square Theatre company in downtown Manhattan in New York City, which still exists today, though it has since moved to Midtown.

Like we suggest above, we wouldn’t be against Disney Plus doing a Bruce Lee-esque character who helps Boba Fett get rid of the bad guys on Tattooine. If not, then at least we have Marlowe.