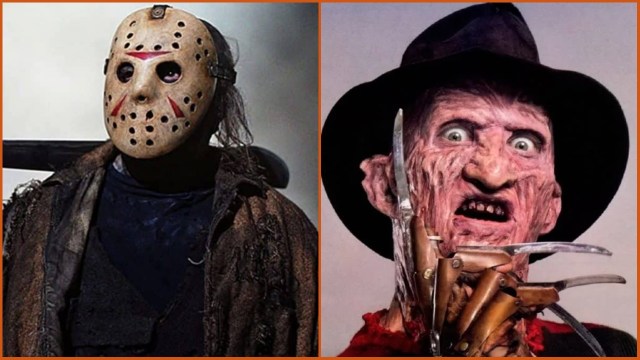 When you think of the mightiest horror villains in the enormous genre, there’s certainly no denying that Friday the 13th’s Jason Voorhees and A Nightmare on Elm Street’s Freddy Krueger both come to mind. One is a mute, no-nonsense monster with supernatural abilities and revenge on his mind, while the other is a smooth-talking, razor-sharp rascal who embodies our nightmares. And although their differences are quite noticeable, they do share one thing in common: they have both racked up a considerable amount of kills during their individual warpaths.

Both of these long-standing franchises debuted in the ‘80s, which certainly proved to be a critical decade for the genre as a whole. Freddy’s official debut came in 1984’s A Nightmare on Elm Street, which premise focused on a group of teenagers in Springwood, Ohio who are stalked, terrorized, and murdered by a vengeful spirit named Freddy Krueger. On the other end, Jason’s debut happened in 1981’s Friday the 13th Part 2, which centered around a group of counselors at Camp Crystal Lake who are targeted by Jason Voorhees — a former child at the camp who drowned years prior.

With both franchises featuring an array of multiple sequels, timelines, remakes, and reboots, a healthy amount of carnage has undoubtedly been displayed over the years. However, even horror hardcores are continuing to ask themselves one question: Who scored the most kills — Jason or Freddy?

On the surface, Jason boasts a jaw-dropping kill count of over 150 people — which certainly makes sense seeing as Jason has a strong tally of twelve films thus far. And while some of those kills belong to Roy Burns, who served as Jason’s imposter in the fifth film, most of the kills belong to Jason Voorhees alone.

On the other hand, many horror diehards believe that Jason actually killed more than 150 people — especially if you take the time to consider and count the number of deaths on the spacecraft in Jason X and those that died on the ship in Jason Takes Manhattan. In addition, Jason accumulated plenty of kills in the horror crossover movie with Freddy Krueger, whereas Krueger killed significantly less people.

As the terrorizer on Elm Street, Freddy Krueger gruesomely slaughtered approximately 49 people during his ever-present reign of terror. However, unlike other villains who solely rely on first-hand brutality kills, some of Freddy’s victims effectively got themselves injured or killed accidentally due to their lack of sleep.

However, when Freddy’s hand — which included razor-sharp fingers — was personally responsible for those kills, he achieved them in various Nightmare sequels where he subsequently ended up getting himself killed in the process. Nevertheless, Freddy remains one of the most resilient and immortal figures in horror, and has committed a string of multiple murders in his unforgiving warpath.

In the end, Jason Voorhees rings in with the most kills in this battle between these two monstrous villains. And while horror fanatics are still awaiting possible news about the overall future of the A Nightmare on Elm Street franchise, Jason Voorhees stans are apparently closer to a new Friday the 13th project than they initially expected.