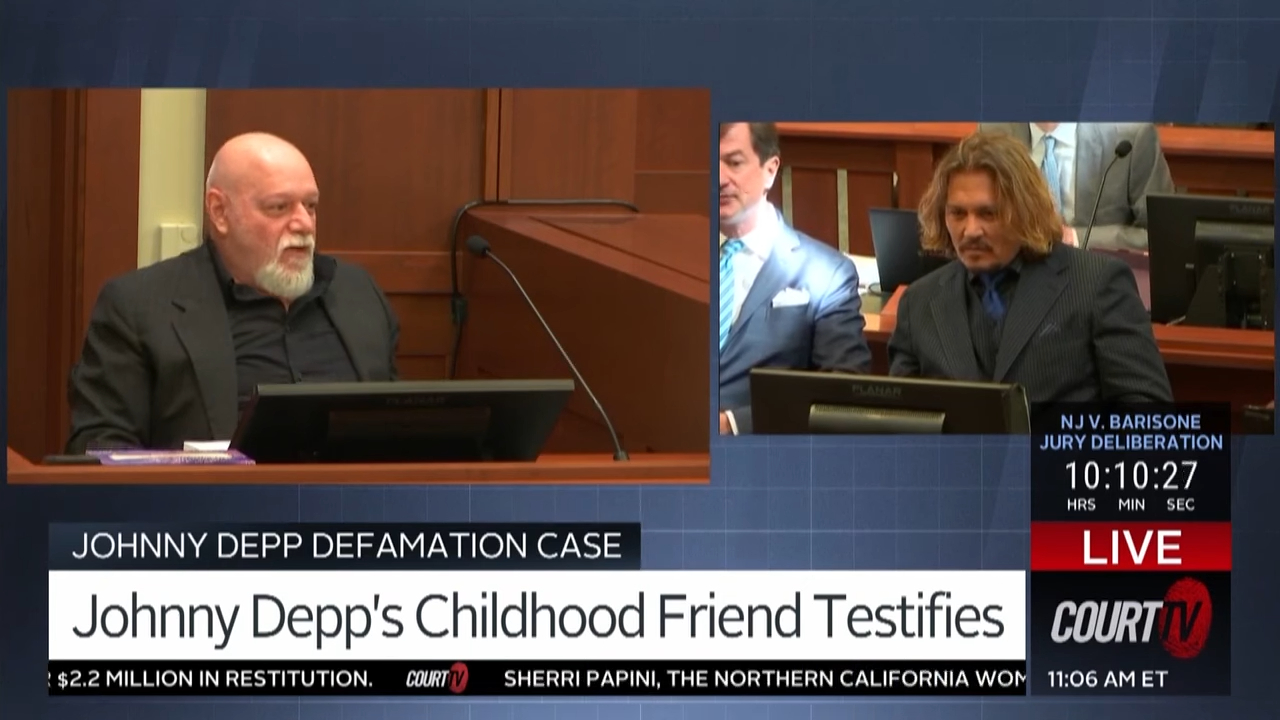 Johnny Depp’s childhood friend and neighbor says the actor’s ex-wife, Amber Heard, told him her then-husband threw a phone at her in the couple’s Los Angeles penthouse, but he did not see any evidence of abuse on her face following the incident.

It was part of Isaac Baruch’s Wednesday testimony for a trial of dueling defamation lawsuits between the two actors.

As ABC News reports, Baruch said Heard told him Depp had thrown the phone at her, but he didn’t notice any injury to her face when he first saw her in the hallway, or the following day, in the sun-bathed lobby of their building.

“She’s got her face out like this to show me, and I’m looking, and I inspect her face,” Baruch said, recalling the May 2016 encounter. “And I don’t see anything. … I don’t see a cut, a bruise, swelling, redness.”

Depp is suing Heard for $50 million stemming from a 2018 op-ed she wrote for Washington Post, in which she claimed to be the victim of domestic violence. Though Depp isn’t mentioned by name in the piece, the Pirates of the Caribbean actor says he was implied as the abuser in the article. He claims the domestic violence allegations are false, and that her indirect claim damaged his career. Heard is counter-suing Depp, also for defamation, for $100 million.

Following her claim of being hit in the face with a phone, Baruch said he did not notice any makeup on Heard. But he conceded during cross-examination that he did not ultimately know whether Heard — who had worked with cosmetics company L’Oreal — perhaps applied some kind of concealer, foundation, powder, or tint.

Baruch, a painter, testified that his friendship with Depp stretches back to 1980, and that he used to work at a Los Angeles music club Depp partly owned. Depp has also given him about $100,000 over the years, in addition to places to live. Baruch lived next door to Depp and Heard at the Eastern Columbia building in Los Angeles, according to Court TV‘s coverage of the trial.

At one point, Baruch got emotional when it came to the subject of Heard’s domestic violence accusations against Depp, saying, “It’s not right, what she did!”

Earlier in the testimony, Baruch said he “loved” Heard when they initially knew each other, saying she was “totally respectful, gracious to me.”

Baruch said he never witnessed Depp or Heard get violent with each other.

Despite describing their relationship as “always loving,” Baruch said he did witness the couple argue a couple of times, even to the point of him intervening on one occasion during an over-the-phone argument.

The incident occurred when Depp was in his kitchen on the phone, with Heard being on the other end in New York at the time, he said.

Baruch said Depp was “screaming about something,” and that he heard Heard’s side of the conversation, too, due to the receiver being on speakerphone.

“The third time it happened, I’m saying, there’s no solution in this conversation. I grab the phone from him and I says, ‘hey Amber, this is Isaac. Listen, this conversation is now over.’ And I hung up the phone. And she didn’t call back again and he went to the couch and went to bed.”

Baruch said another argument centered around Depp, Heard, and others discussing kicking out Whitney Henriquez, Heard’s sister, from their home.

In a previous libel lawsuit based in London, which Depp leveled against The Sun newspaper, Henriquez testified she saw Depp punching Heard, Sky News reports. Depp had sued The Sun for describing the actor as a “wife beater,” but the judge ruled that “the great majority” of Heard’s claims of domestic abuse that the publication cited “could be proved to the civil standard,” USA Today reports.

Heard’s attorneys have been zeroing in on Depp’s drug and alcohol use as part of their defense, arguing that Depp has no credibility in his denial of domestic violence since he frequently drank and used drugs to the point of blacking out and not remembering anything he did.

This new pair of dueling lawsuits are based in Virginia, with Depp’s defamation suit specifically targeting Heard, not the Washington Post.