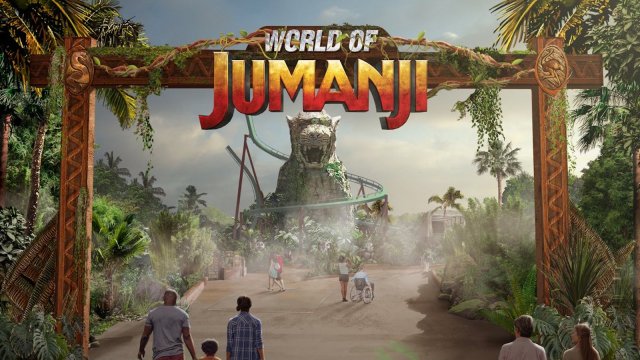 Deadline reports that ‘The World of Jumanji’ theme land will cost $20.5 million to develop and will be located in Chessington World of Adventures Resort in the UK, a 40-minute drive from London. The park will immerse visitors in a ‘world-first’ experience based on the adventures from the Jumanji films. Visitors will be welcomed with a lush and overgrown jungle-themed entrance, and will have a chance to see the Jaguar Shrine featured in Jumanji: Welcome to the Jungle.

Divisional Director at Chessington World of Adventures Resort, Tim Harrison-Jones, told Deadline that this future park attraction “will be the largest that Chessington has ever seen” and that guests will expect rides, zoos, and glamping opportunities.

“What could be more exciting than bringing the global hit Jumanji film franchise to life within the single largest development Chessington has ever seen. We know what it takes to create the ultimate adventure for our guests, spread over 128acres the Resort already delivers surprises around everyone corner with over 40 wild rides and attractions, zoo with over 1,000 majestic animals and two themed hotels, plus glamping!”

“After being entertained by the films for so many years, fans now have the chance to experience Jumanji in a whole new dimension and we are thrilled to be going on this exciting adventure with the creative team at Chessington as Jumanji further expands with its very own themed land.”

The Jumanji film franchise was kickstarted in 1995 with a titular film about a supernatural, jungle-themed board game starring Robin Williams and Bonnie Hunt. The franchise was then rebooted in 2017 with Jumanji: Welcome to the Jungle, and Jumanji: The Next Level in 2019, starring Dwayne ‘The Rock’ Johnson. All three films were successful at the box office with the first grossing over $262 million worldwide, and the modern sequels grossing $900 and $800 million respectively.