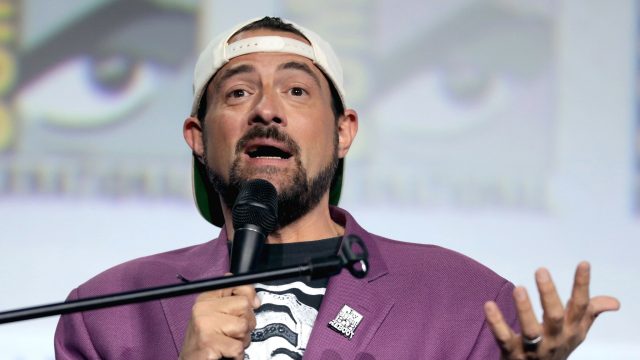 Kevin Smith’s wife and daughter don’t find his heart attack as funny as he does.

Smith’s heart attack, which occurred in 2018 as a result of a blocked left anterior descending artery, inspired the plot of his upcoming film Clerks III. His near-death experience and life-saving surgery were not easy for his wife Jennifer Schwalbach Smith and daughter Harley Quinn Smith, which is why the film hits them a little differently than it does their gallows humor patriarch.

“My wife and kid don’t enjoy the movie the way I do, at least the first half hour . . . My wife’s like, ‘Look, what you think is funny now was the worst moment of our f—ing lives.'”

In classic Smith fashion, he told his wife, “Don’t say that to the critics, for Christ’s sakes! It’s too easy a lay-up for them!”

Later in the same chat with Entertainment Weekly, Smith expanded on the heart attack motif of his movie.

“I wanted to tell my heart attack story with my characters . . . So Randal, the video-store guy [played by Jeff Anderson], has a massive heart attack. While he recovers, he laments that he’s wasted his life watching movies and never thought about making one himself.

Randal and Dante [Brian O’Halloran] essentially make their own version of Clerks, a black-and-white movie called Inconvenience. It’s incredibly meta. The snake really eats its own tail, swallows itself, and s—s itself out, and that is Clerks III. You can put that on the poster!”

You can make up for Smith’s heart attack by having a laugh attack when Clerks III premieres on Sept. 13.