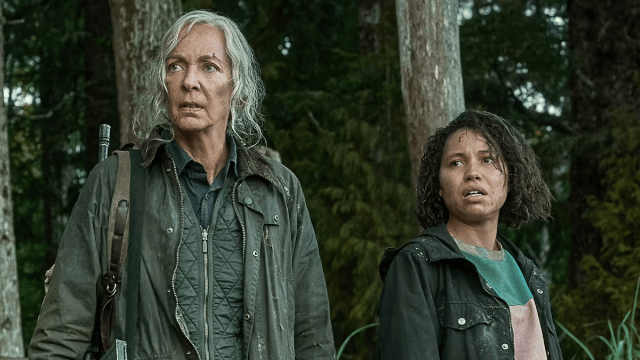 One of the more explosive and notable movies to come out in recent memory is Lou, starring the incredible Oscar-winning actress Allison Janney as the titular character. It’s being billed as a Taken-type movie (the mysterious loner trope) starring a woman.

“A young girl is kidnapped during a powerful storm. Her mother joins forces with her mysterious neighbor to set off in pursuit of the kidnapper. Their journey will test their limits and expose the dark secrets of their past.”

The movie has a so-so score on Rotten Tomatoes, with a Fresh designation (but just barely) at 64% and a slightly higher audience score at 68%.

The ending of the movie left some people scratching their heads, so we’re going to break everything down and explain it. Including who dies and who doesn’t. Everything after this section is going to be spoiler heavy, so if you haven’t seen the movie yet but want to, don’t read any more.

Lou is a lot easier to understand once you realize the truth behind the movie’s plot points. Lou is an older lady who lives in a little cabin on Orcas Island close to a forest. She’s a loner besides her dog Jax and a neighbor named Hannah who lives on the property with a young daughter named Vee.

Hannah is Lou’s tenant, and she recently escaped an abusive relationship. She tells her daughter that her father is on an adventure and she tells others that he died a few years ago.

She tries to get to know Lou but the cantankerous old lady keeps her distance. The movie gets going as a storm is on the way and we see Lou preparing. The director sprinkles in some clues here: there are papers having to do with Iran and Lou burns them all and locks up her dog Jax.

She leaves a letter to Hannah on the table and prepares to shoot herself with a rifle. Earlier, she tells Hannah to make sure she pays the rent tomorrow (despite Hannah’s objections that she has to buy storm supplies) ensuring that she’ll be found the next day and her dog will be taken care of.

While this is happening, the storm gets worse and the power goes out in Hannah’s house. She goes outside to see what’s happening and finds her boyfriend murdered. She immediately realizes it’s her ex, Philip. When she runs back into the house she finds her daughter gone. She then runs to Lou’s and just as the main character of the movie is about to shoot her gun Hannah bursts in and begs her for help. Lou agrees.

So that’s the main plot that moves the story forward. Now, let’s look at some key facts we don’t find out until later in the movie, but will help with understanding the next plot points.

Let’s go over some of the plot points now that we have this key information.

Lou is set in the ’80s, specifically November 14, 1985. We know this because it’s the day after a speech then-President Ronald Reagan gave to the nation where he brought up a situation in Iran.

The movie makes things more dramatic by claiming there are “heightened tensions” in Iran over CIA involvement in a coup in 1953, something directly involved with Lou. It shines some more light on her backstory and legacy and speaks to why she’s decided to take her own life.

Early in the movie Lou rebuffs advice from kindly sheriff Rankin (played by Matt Craven). He tells her to get a copper bracelet to help with her arthritis, something she scoffs at. Later, the movie makes a reference to this when Lou’s hand cramps and she and Hannah fall from a rope bridge.

We hear Hannah talk about Philip’s two friends who help him and are “just as vicious” as he is. They’re Green Berets who served with Philip named Tony (played by Daniel Bernhardt) and Gerry (played by R.J. Fetherstonhaugh). Unfortunately they are not long for this world and Philip neglected to tell them that his mother is ex CIA.

She pulls the old lady routine and ends up murdering them both, a scene that illustrates how Philip doesn’t mind using his war buddies as pawns.

Here’s some backstory on Philip: he followed in his mother’s footsteps and was one of the first soldiers that went to El Salvador to train the military and stop the flow of Communism around the world. At one point he was court marshaled and Hannah reveals she has evidence that he tortured people for fun, illustrating how far he’s gone from his humanity.

Once the movie finally reveals that Philip is Lou’s son things start to make more sense. It doesn’t really make a ton of sense that he would kidnap his daughter in the middle of the storm but then you realize he planned the whole thing. He knows help won’t come in a storm and he wants to lead them to the lighthouse for a showdown.

This is also why he blew up Lou’s car.

Hannah’s story is tragic and fortunately she’s written well. Smollett also does a great job with the character. Earlier in the movie, Lou gives Hannah some sass for staying with Philip so long despite their obvious troubles and Philip’s murderous threats.

This scene gets a little more weight when we realize who Lou really is. Hannah also gets to pull some good stuff out of Lou, especially getting her to admit that Lou is judging the situation without all of the information.

This sets up Hannah’s big scene where she tells her daughter “game on” to warn her so she could injure Philip.

The bracelet becomes important again when Lou and Hannah are trapped in the basement of the lighthouse with a bomb. She changes the frequency on the detonator and then uses the bracelet, wire, and a stick and creates a detonator out of Hannah’s radio and blows up the lighthouse.

Of course, this allows the helicopter to kill Philip. Now for the big question.

What about the dog?

Lou’s hunting dog Jax doesn’t really get involved too heavily in the plot, but he is around until they reach the rope bridge, where’s he’s told to go home. He does but makes an appearance again later on Eagle Bay when Lou is badly hurt. He shows up one more time when Lou heads to the beach to have her final showdown with Philip.

However, we don’t see Jax during the fight, even though it’s expected that he would show up at a crucial moment and save her from certain death. Where did he go? Maybe she ordered him home again?

Lou, in addition to being an action movie, is also a bit of social commentary on the time. Once the big, climactic fight scene is over we’re treated to a peaceful scene of Vee stacking cans of Shell oil in play.

The cans imply the way countries will do anything to keep oil viable and flowing, including staging a coup in Iran. Lou demonstrates the personal cost and the human beings behind such operations. Vee is going to grow up with a “dead” grandmother, a dead father, PTSD from kidnapping, and a world dependent on oil. Brutal.

Does Lou die at the end of Lou?

The final shot of the movie confirms that Lou somehow survived her predicament despite the incredible odds against her (it’s a movie!). She used her own son as a human shield, which sounds terrible on paper but in reality he had it coming and then some. She also has to deal with a huge axe wound and a few other serious injuries.

Then she somehow escapes from the CIA on an island. We see a woman watching Hannah and Vee from a distance, with a copper bracelet on her hand. The bracelet serves two purposes: it confirms that the woman is Lou and it implies that she had some help from the sheriff.

She now has brown hair and is wearing glasses, which I don’t think is enough to fool the CIA but, whatever. Her future would be incredibly perilous even if she did find a way to reintegrate into society and keep an eye on her family, as she’d always be on the run.

By burning the documents, she got rid of the one piece of leverage she had against the CIA. There is the possibility that she could still blackmail them by bluffing that she would expose the truth. Regardless, the ending isn’t that happy after all for our titular heroine.

Lou is currently streaming on Netflix.