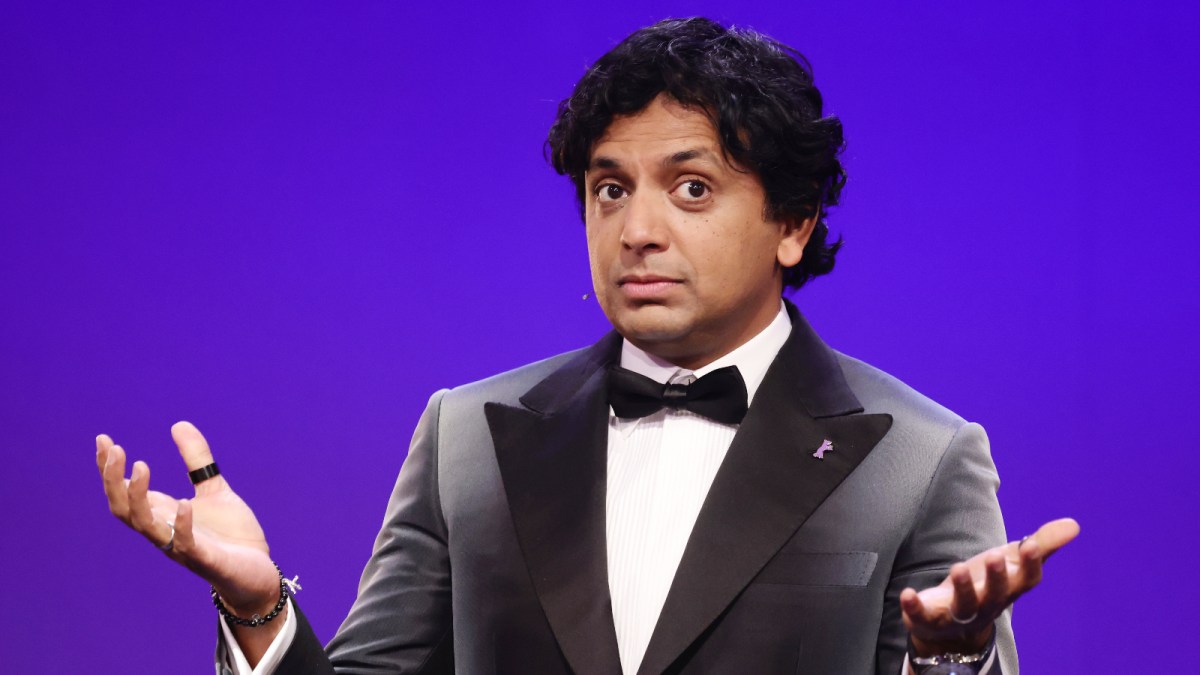 What is real, what is not? It’s a question that lingers at the heart of just about every M. Night Shyamalan project over the year, and it’s no different with his next film, the upcoming Knock at the Cabin.

Slated for an early 2023 release, the synopsis of the movie even lets you know right away that there will be mind games, and confusion, not just for the audience, but in the world of the movie as well. Here, check it out, and read it in your best movie trailer voice for extra fun:

While vacationing at a remote cabin in the woods, a young girl and her parents are taken hostage by four armed strangers who demand they make an unthinkable choice to avert the apocalypse. Confused, scared and with limited access to the outside world, the family must decide what they believe before all is lost.

While we can’t nail down a lot of what that might mean, or might be alluding to, especially this “apocalypse” part of it. Considering that the director would potentially consider the events in The Happening or Signs to be apocalyptic, it could mean just about anything, really. Yet there are some realities that we do know already and can nail down—such as when is Knock at the Cabin coming out, does it have a trailer, who is set to star in the movie, and maybe even just a little bit more.

Knock at the Cabin release date

It’s nearly impossible not to add the word “door” every time I write, think, or even say the movie title out loud. Moving past that, Knock at the Cabin Door is already ramping up for its theatrical release. The 15th movie from Shyamalan is slated for a release stateside 31 years after his first movie came out, Praying with Anger, in 1992.

Just in time for couples to cuddle up and get away from rom coms and enjoy a bit of a fright instead, Knock at the Cabin is scheduled for release on Feb. 3, 2023.

The cast for Shyamalan’s latest venture

At the head of the whole thing is a towering figure who has started to become entrenched in anything buzzworthy these days—our man Dave Bautista. Coming fresh off his part in Glass Onion: A Knives Out Mystery, with the third installment of Guardians of the Galaxy right there on the horizon as well, not to mention a pretty stunning and powerful portrayal in the epic book-turned-movie (again) Dune, as well as a solid run in Blade Runner 2049, Bautista is a great choice for Shyamalan as he looks for another hit in his hit-and-miss repertoire, and the director said his short but solid spot in the Blade Runner sequel drew him to the casting.

Along with Bautista, the confirmed stars in the movie are Jonathan Groff, Ben Aldridge, Nikki Amuka-Bird, Kristen Cui, Abby Quinn, and Rupert Grint. Of course, you can go ahead and slate in that Shyamalan cameo as well.

As for that cast, you most likely will recognize the British actor Aldridge from the diabolically funny (and we mean that in so many ways) Fleabag, where he had a six-episode run simply as “Arsehole Guy.”

Groff will have a pretty recognizable face right now as well, especially if you decided to port in and watch the fourth Matrix movie, with Groff taking up the mantle as Agent Smith in The Matrix Resurrections. He was also the Netflix crime drama Mindhunter for three years, and voiced Kristoff and Sven for Frozen and Frozen II.

Grint you most definitely will recognize, whether you know why or not, because he played Ron Weasley in the Harry Potter movie series. Even if you never saw the films themselves, you’ve surely seen the now 34-year-old actor’s mug on a poster, a trailer, or some other memorabilia related to the Harry Potter universe over the years. He also plays a big role in another Shaymalan project, the streaming TV series Servant, a psychological thriller (naturally) which has been running on Apple TV+ since 2019, with a fourth and final season slated for just before this movie drops, on Jan. 13, 2023.

Though maybe not in as a big of a role as the others mentioned so far, Amuka-Bird is a pretty recognizable actress with parts in a whole slew of projects. She also teamed up with Shyamalan in the past, on his previous film project, Old, where she played Patricia.

Quinn has been in a few well-known TV series, such as Law & Order: Special Victims Unit, Better Call Saul, and Black Mirror. Cui, meanwhile, is an unknown child actress who seems to be making her first big appearance in a movie.

Of course, there’s a trailer, the movie comes out oh-so-soon.

It starts off just about inconspicuously as you could imagine, almost a little reminiscient of Jordan Peele with a different tone, but the tune of Boogie Shoes tones down quickly, and the suspense builds immediately with Bautista’s character, Leonard, emerging from the woods and greeting the girl played by Cui.

The slamming of the front door in trying to smash it open by Bautista turns into the steadying drum smack of the background music as it builds up and we see him and three others continue to break into the cabin, which they successfully do.

During the trailer, Bautista’s character says to the little girl that he’s very sad, because “you see, the four of us have a very important job to do. In fact, it might be the most important job in the history of the world” we hear him saying over top the scenes to come.

They overwhelm the duo inside the house, and as we see the girl, known as Wen, having to make sure the two men are tied up (it’s unclear if they’re her guardians, but it seems to be the case), Leonard continues his doomsday scenario-ing, saying, “The four of us are here to prevent the apocalypse. Your family has bene chosen to make a horrible decision. If you fail to choose, the world will end.”

The website for the movie features three characters standing in a flowery meadow with their backs turned toward us, each armed with a weapon or something or rather in their hands, glaring at a cabin not too far off in the distance. The poster expands to show the fourth member of Bautista’s clan who will force the family to make this choice he’s alluded to.

Here, we get another glimpse into the mind games that the audience will be treated to, as well as the one the characters in the movie will have to play themselves: “Save your family or save humanity. Make the choice.”

The movie itself is based on the book titled The Cabin at the End of the World, released in 2018 from author Paul G. Tremblay. Before the book was even released, Tremblay had already signed an option with FilmNation Entertainment in 2017, which was kept a secret by everyone involved, including the author, until recently, just this past summer in July.

In this adaptation of a novel, Tremblay seems to say that Shyamalan did a lot of work into turning the written word into something for the big screen.

“I have no contractual say over the screenplay or filming, but at the start FilmNation was great about keeping me in the loop with the early draft of a screenplay and asking my input. Much later, when we were introduced via phone, Night and I discussed the book and I answered a bunch of his questions about character and story, about why I did what I did,” Tremblay said in an interview with CNBC. “I can’t speak to his screenwriting process. I did get to visit the set and watch him and crew work for two days. I came away impressed with the positive creative atmosphere he engendered.

On top of that, there was a screenplay that was making the rounds in 2019 before Shyamalan was attached to the project, and he was able to gain control of it and get on board the project after his interest in the screenplay. You might not be shocked to find out that upon gaining a part in the project, he set about rewriting the script and getting it ready for him to be at the helm of it as director and producer. The writing credit for the screenplay actually names Steve Desmond and Michael Sherman along with Shyamalan.

The music for the film, which we get a glimpse of in the trailer as well, was done by up-and-coming composer Herdís Stefánsdóttir, who previously worked on The Sun Is Also A Star in 2019 and the series Y: The Last Man starting in 2021, among several others.

Another note around the movie that goes behind the scenes is the inclusion of Jarin Blaschke as the cinematographer. For those that aren’t familiar with his work, you might have seen some of the things he’s been behind that would definitely get you jazzed about where this project could go. The Lighthouse, a bizarro visual romp that will play tricks with your mind, I would notably put at the top of that list, but this year’s The Northman and the 2015 film The Witch would all put you in the mindset of what he and Shyamalan might conjure up together.