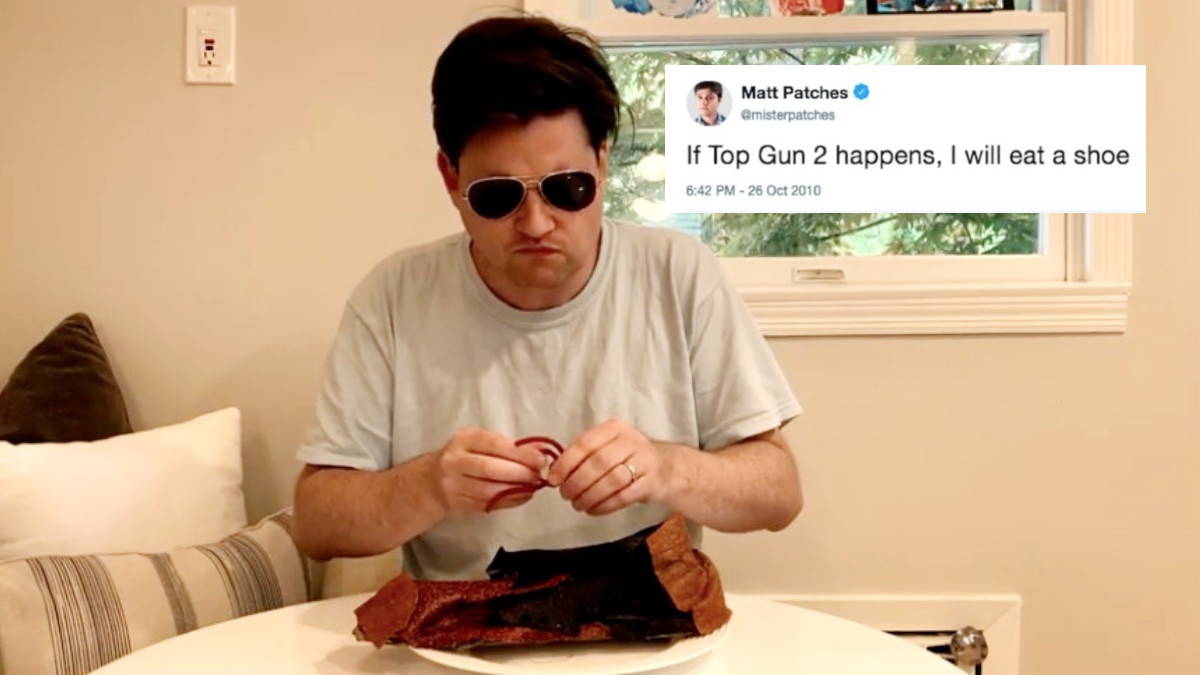 Top Gun: Maverick soars into theaters this week, the long-awaited sequel to the 1986 action drama that has been over a decade in the making. But when the sequel was first announced by Paramount in 2010 — before the original director Tony Scott died by suicide, the first of many hurdles that would go on to delay the film — one film buff was so convinced that it would never happen that he tweeted a vow that would come back to haunt him.

Now, after a delayed-release, first due to complicated action shots and then the COVID-19 pandemic, Top Gun: Maverick is finally here, which can mean only one thing for Patches: it’s time to pay the piper. And so he did!

“A decade ago I tweeted that if Top Gun 2 happened I would eat a shoe,” Patches tweeted Wednesday, alongside a photo of himself with a cake in the shape of a shoe that was gifted to him by the studio. “No one has let me forget this … including the folks at Paramount, who are quite excited for me to be wrong.

“Saving this for after the actual shoe (although I may already be in a coma),” he added. “Check back Thursday.”

Though he was obviously not thrilled to eat the shoe — as Patches reminded viewers in a 20-minute YouTube video documenting his saga — it has been done before. In 1980, director Werner Herzog released the documentary short Werner Herzog Eats His Shoe after placing a bet with his friend Errol Morris that he would eat his shoe if Morris ever finished a movie he was working on. As suggested by the title, Herzog did indeed lose that bet.

But whereas Herzog boiled his shoe with garlic, herbs, and stock for five hours, Patches took a different approach.

Taking a page from Charlie Chaplin, who once ate a licorice shoe in the 1925 Marx Brothers film The Gold Rush, Patches decided to bend the rules very slightly by making a mold of his foot, and then creating a shoe out of edible fruit leather and wearing it once outside before eating it.

And despite the fact that the shoe was speckled with grass once he came back inside, Patches eventually made good on his promise.

“Well, Top Gun 2 really happened,” Patches said towards the end of the video. “I haven’t seen it. But, I ate a shoe.” As for why, he quoted Herzog, the man himself: “To eat a shoe is a foolish signal but it was worthwhile. And once in a while I think we should be, we should be foolish enough to do things like that.”

Words to live by! Though we don’t necessarily advocate that anyone actually eat a shoe, you just can’t argue with that logic.