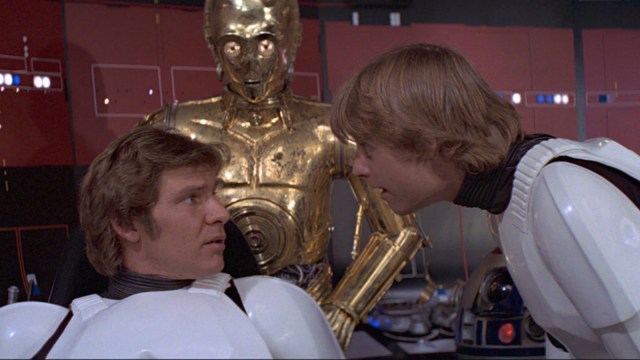 Like anything else related to Star Wars, the sequel trilogy will be debated and discussed until the end of time. It had high highs, low lows, creamy middles, and, for Mark Hamill, one negative still stuck in his craw today is the lack of time with Ford’s Solo.

Hamill posted the above on Twitter over the weekend. He re-tweeted the conservative The Daily Caller which used an image from President Joe Biden’s recent speech blasting former President Donald Trump and many of the man’s most passionate supporters. While they were calling attention to the notion the shot makes the president look evil and up to nefarious purposes during his present time in the office, several have not focused on this and instead concur with Hamill that the lack of a reunion is a shame;

Another reply sees someone suggest that Luke and Ford’s Han Solo should become Force ghost friends. Given Disney’s hunger for content on their various services, a series about the kinds of adventures the pair would somehow get up to from the franchise’s afterlife sounds like just the thing they’d greenlight. Though, it is unknown if this user is really completely serious;

Another also says the lack of connecting the major characters from the initial films was a misstep. While others have said it was simply a failure, for this figure, not doing so was akin to having a legendary band perform on the same stage, but only individually;

Of course, at this point, no one knows what is coming next for the Star Wars franchise on the big screen, so who’s to say Hamill won’t someday get his wish? For now, the initial films in the saga and most of its television offerings through the preceding years are available for people to stream often over at Disney Plus.