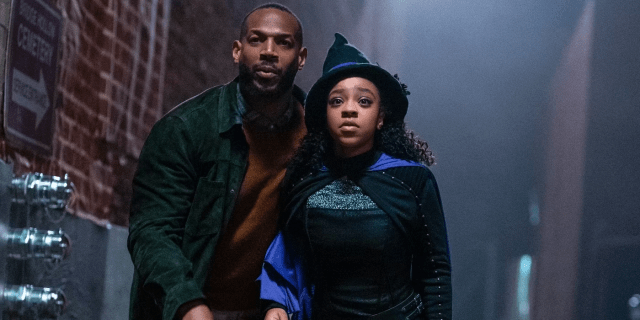 We all have that one friend that stocks up on their Halloween decorations before October has even come close to making an appearance on the calendar. Netflix, evidently, is that friend.

To its credit, the likes of Mr. Harrigan’s Phone, The Midnight Club, Cabinet of Curiosities, and Wendell & Wild will all be releasing in the aforementioned month, but Netflix seems extra eager about showing off its slew of spooktacular content these days.

And the streamer is indulging yet another feature in the form of The Curse of Bridge Hollow, the Marlon Wayans-led comedy romp whose zany trailer dropped earlier today.

Wayans (A Haunted House, Fifty Shades of Black) stars alongside Priah Ferguson (Stranger Things) as a father-daughter duo who have a bit of trouble seeing eye-to-eye; the father a straight-shooting science teacher with no time for the fantastical, the daughter an adventurous teenager who finds great joy in Halloween. When the daughter, Sydney, accidentally releases an ancient evil spirit that causes their town’s many elaborate Halloween decorations to come to life, she must team up with her dad to save Bridge Hollow, and Halloween, from the murderous plastic platoon.

Given that the film’s goof factor seems to be off the charts in everything from the premise to the characterization to the dialogue, this look to be another true-to-type Wayans romp.

The Curse of Bridge Hollow will release to Netflix on October 14.