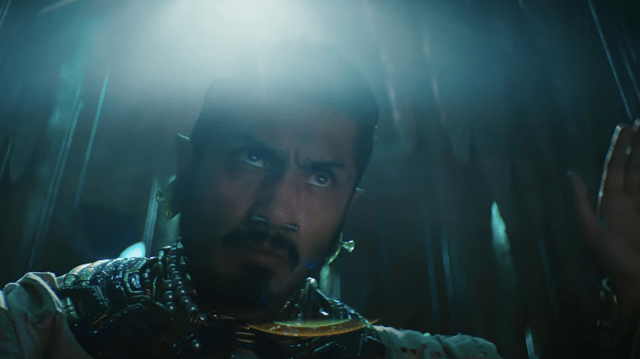 The new trailer for Black Panther: Wakanda Forever, which will be rounding out the 2022 film slate for Marvel Studios, arguably could have won Comic-Con on its own. Comparable to trailers such as Avatar: The Way of Water, Wakanda Forever‘s trailer leaned heavily into the atmospheric magnificence of Wakanda, with gorgeous cinematography, a moving soundtrack, and minimal dialogue.

We also got a closer look at the film’s villain, Namor the Sub-Mariner. Having first appeared in the comics way back in 1939, Namor is something of a legacy figure in the world of Marvel, and his debut in the MCU has been one of the most anticipated to date. Portrayed by Tenoch Huerta, Namor features as the leader of Talocan, a civilization of ocean-dwelling peoples who target Wakanda in the wake of King T’Challa’s death.

For those of you not familiar with Namor, he doesn’t exactly rank among the cutest and cuddliest of the Marvel mythos; a statement that perhaps undercuts just how nasty the character is. Luckily, with the help of r/marvelstudios, some comic book faithfuls have offered their insight into what we can likely expect from the Sub-Mariner’s villainous gravitas.

When asked to rank Namor’s villainy on a scale of one to 10, several users simply laughed at such a meek limit.

Others took the opportunity to cross their fingers for Namor’s presence beyond Wakanda Forever, given his history with the Marvel universe and potential as both a character and as a villain.

Another user pointed out, however, that Namor may not be the ultimate big bad of the film, as it seems that someone else will be pulling the political strings. This is bolstered, too, by the fact that Talocanian villain Attuma will also be appearing in the film. This could perhaps soften the blow of whoever Namor turns out to be.