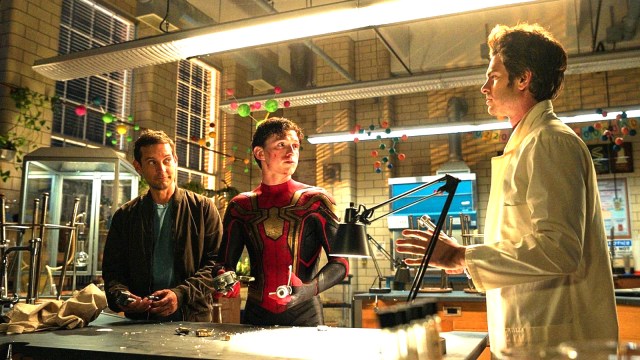 As the sixth highest-grossing release of all-time that netted $1.9 billion at the box office, everyone is fully aware that the Marvel Cinematic Universe’s Spider-Man: No Way Home set a huge number of box office records. However, it’s an altogether different sort of benchmark that’s captured the imagination of the fandom.

On Reddit, a curious question was put forth asking if Tom Holland’s trilogy-capper featured the single most instances of British actors playing Americans in a single film. While it’s the sort of thing that’s never going to cross anyone’s mind unless you really put some thought into it, the fact over 200 comments have been dropped since the thread went live highlights just how invested people have become already.

Tom Holland, Andrew Garfield, Benedict Cumberbatch, Charlie Cox, Alfred Molina, and post-credits guest star Tom Hardy bring the contingent up to six, with Benedict Wong left on the sidelines due to his Sorcerer Supreme’s distinct lack of a stiff upper lip. Rhys Ifans is Welsh, but his accent proved to be so wild across The Amazing Spider-Man that it’s hard to tell what he’s really aiming for.

One indisputable fact of the film industry is that British thespians are much better and a whole lot more consistent at nailing an American accent than their counterparts from across the pond are at doing the opposite, and the less said about the countless butchered Irish and Scottish brogues we’ve heard from stars of many countries, the better.

Superhero cinema is loaded with talent from the United Kingdom, to the extent we’re living in a world where Spider-Man, Batman, and Superman are all Brits, but No Way Home appears to have taken the biscuit in terms of sheer volume.