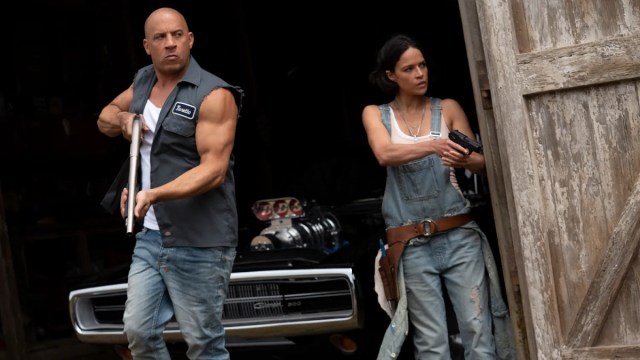 Michelle Rodriguez and Vin Diesel have been close friends and regular co-stars for over 20 years, with the leading man of the Fast & Furious franchise also doubling as arguably Hollywood’s most famous Dungeons & Dragons player.

The chrome-domed action star has been playing the tabletop favorite for four decades, and he even wrote the foreword to milestone retrospective 30 Years of Adventure: A Celebration of Dungeons & Dragons. In a delicious twist of irony, though, it’s Rodriguez who gets to play in the fantastical sandbox when blockbuster epic Honor Among Thieves comes to theaters next year.

That might sting a little for Diesel given his lifelong love of the game, and in an interview with Entertainment Weekly following Honor Among Thieves‘ panel at San Diego Comic-Con, Rodriguez couldn’t help but admit she’s been having fun at his expense.

“Yeah it’s great. I get to rub it in his face… Dude, he’s a Dungeon Master. If you ever took a look at his closet, he’s got all the paraphernalia of a Dungeons & Dragons fiend. He puts a lot of his Dungeon Master techniques into making movies and producing them.”

Diesel and Rodriguez are currently shooting Fast X together, but it wouldn’t be a stretch to imagine that the vest-wearing patriarch of the family has been quizzing the longtime Letty about Honor Among Thieves. The actor and producer certainly knows his stuff when it comes to the lore, so he probably wouldn’t be above picking holes in the story, either.

That being said, don’t be surprised if Diesel ends up snagging an invite to the premiere as Rodriguez’s plus one.