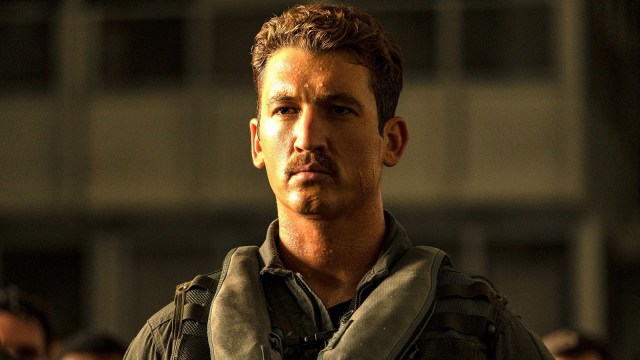 Our prayers have been answered with news today that Miles Teller is set to star in a new project by the director of The Black Phone. Teller won’t just be starring in Scott Derrickson’s The Gorge; he’s also slated to take on the role of executive producer.

Deadline shared the news this afternoon, and we’re already preparing for new content on TellerTok. Yes, TellerTok, because when videos of the star are uploaded to the streaming platform, it gets a new — well-deserved name.

Sources tell Deadline that he’s in final negotiations for the project, which will be exciting. Teller was said to have been quick to want to move forward with The Gorge after reading scripts and early meetings with the team behind the film.

The synopsis is being kept secret, but the script was written by Zach Dean, responsible for The Tomorrow War. So the high-action and genre-bending descriptions are right on the mark.

Teller is having a big year, with the premiere of Top Gun: Maverick and the success of his heartbreaking/warming and extra charming character, Rooster, to the Netflix premiere Spiderhead — he put in a lot of work and deserved vacation. Teller’s wife, Keleigh, has been sharing snaps of them enjoying time traveling and spending days in the sun.

Derrickson is also celebrating successes of his own, with the terrifying movie, The Black Phone wowing audiences worldwide.

If you don’t want to wait to see Teller in his next project, you can still see Top Gun: Maverick in some theaters worldwide or at home, with the film now on on-demand platforms in some markets.