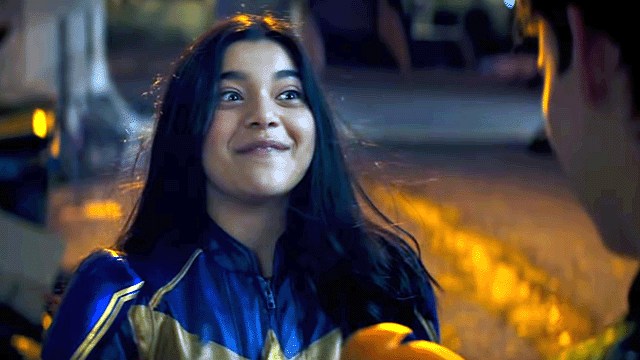 The three-way fan battle between Tobey Maguire, Andrew Garfield, and Tom Holland has been going strong ever since Holland made his MCU turn as the iconic webslinger. For every Maguire purist, there’s a new-age Holland loyalist to face them, all sandwiched together by the odd Amazing Spider-Man supremacist.

Spider-Man: No Way Home may have cooled the flames after we all got to watch the Spider-Men lift each other up, but MCU star Iman Vellani, who just finished up a wildly impressive portrayal of Ms. Marvel in the Disney Plus series of the same name, has officially joined the debate.

During a Reddit AMA, one user asked Vellani who her favorite Spider-Man is. Is it her fellow MCU comrade Tom Holland? Nope. Is it Andrew Garfield, whose films the young actress was most likely to have grown up with?

Wrong again. Indeed, Vellani is a confirmed Tobey Maguire fangirl as far as Spider-Man goes, though she’d be lying if she said she didn’t love all of them.

The cheers from the Maguire camp could be heard from the top of the Empire State Building, reveling in the fact that they now have an MCU celebrity on their side.

Furthermore, it seemed Vellani gained another subreddit fanbase in the form of r/raimimemes as well. The Maguire train has its perks, apparently.

Her Spider-Man preference was one of a myriad of questions posed to the Ms. Marvel star, all of which you can find on the AMA post in r/marvelstudios. But make sure you’re all caught up on Ms. Marvel, streaming in full on Disney Plus, before venturing into the subreddit, lest your week gets ruined by spoilers.