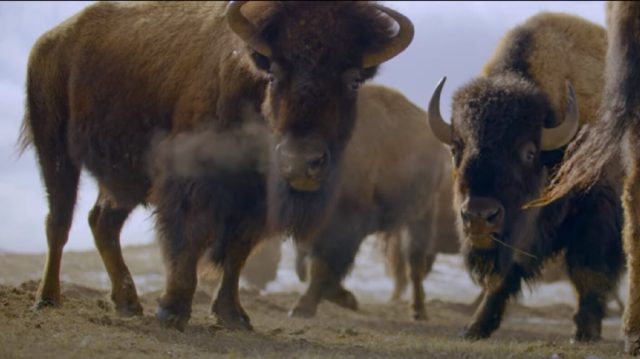 The stories that are told regarding the history, heritage, and potential of Native Americans in their regions, the parts of the world that they live on and continuously protect and preserve carry a lot of weight these days. They are tales that are often full of sorrow and loss but still contain pride and persistence. And they sometimes still go largely unnoticed by a wide variety of people.

Various cultures and societies that still exist to this day continuously share a sense of humanity that educates those who are new to Native American experiences, and inspires those who have already learned from the Indigenous people who remain, all over the Americas.

For some of us out there in the world who might not know these stories, we can still find the time to take in their culture by way of a film, easily found on Netflix.

Gather is a harrowing, yet passionately inspiring documentary from 2020 that gives the viewer an eye-opening account of how Indigenous people from various areas of the U.S. are doing what they can to establish sustainable food sovereignty to their people. The film follows the agricultural backgrounds of the Apache nation, the Cheyenne River Lakota Nation, and the Ancestral Guard of the Yurok peoples, respectively. Popular actor Jason Momoa — who is also of Indigenous background —served as one of the project’s executive producers, along with members of the First Nations Development Institute. In the same year as its release, the film went on to win Best Documentary Feature at the Red Nation Film Festival Awards and was also named a Critic’s Pick by The New York Times.

This story from 2017 follows Saul Indian Horse, a young man from the Canadian First Nations who surpasses the harsh environment around him by playing hockey. The plot — which is adapted from the 2012 novel by the late Richard Wagamese (Ojibwe) — begins with Saul in his early years as a young boy that faced constant oppression due to his Indigenous roots. He picks up on the game of hockey as a way to deflect from the harshness that’s seemingly all around him. Even though prejudice is also present on the ice, Saul seems to naturally excel while playing the game, as a means to escape his often difficult life.

Not to be confused with the 2021 horror-comedy involving vampires in Lake Tahoe, this movie from 2019 follows a Canadian soldier who deals with his imprisonment under the Taliban during the war in Afghanistan. Asivak Koostachin plays a Canadian man from the First Nations tribe of the Gwich’in, originating from the northwestern part of North America, mostly above the Arctic Circle.

This film does a wonderful job of educating the audience about the origins of the people from that region of the world during the flashback scenes that help set the film’s tone. Despite the harsh depictions of war throughout the film, the plot is rather dramatic in tone as you get to appreciate the humanity behind this lone soldier whose immediate future is considerably grim.

The Body Remembers When The World Broke Open

This film from 2019 tells a dramatic story about two Canadian women who unexpectedly cross paths, resulting in a special bond amidst a distressing situation. Set in Vancouver, the plot follows one Kwakwaka’wakw woman and another of Blackfoot and Sámi heritage. Their respective yet strikingly different social statuses clash early on but seem to quickly fall by the wayside once they each open their minds to the other’s personal situation.

The story is based on real-life accounts experienced by Elle-Máijá Tailfeathers, who acted, co-wrote, and co-directed the film. Canadian filmmaker Kathleen Hepburn shared writing and directing duties for the project. The film easily earned numerous accolades including Best Director and Best Original Screenplay at the Canadian Screen Awards, and Best Canadian Film from both the Toronto Film Critics Association and the Vancouver Film Critics Circle, to name a handful.

Rumble: The Indians Who Rocked The World

This project was actually inspired by an exhibit set up by the film’s executive producers, Salas (Apache) and Tim Johnson (Mohawk), for the Smithsonian National Museum of the American Indian. And as you might expect, this documentary did very well among its audiences. At the 2017 Sundance Film Festival, it won the World Cinema Documentary Special Jury Award for Masterful Storytelling. And it won Best Feature Length Documentary, Best Editing in a Documentary, and Best Cinematography in a Documentary at the Canadian Screen Awards in 2018.

This feature-length film from 1993 stars Hollywood legends Gene Hackman, Robert Duvall, a fresh-faced Matt Damon, and Wes Studi as the titular character. Not to be confused with the made-for-TV film from the same year that was more historically accurate, this one is technically considered a fictionalized account of the Apache Wars and Geronimo’s eventual surrender to the United States Army in 1886. For example, this film’s script tells of an event involving Geronimo’s activities that in actuality didn’t occur in the same timeframe in real-life. However, it was met with a favorable response from various Native American groups despite it not performing well at the box office.

Produced in 2016, this biopic chronicles the life of Mary Thompson Fisher, a woman of the Chickasaw tribe in Oklahoma who became one of the greatest Native American artists of all time. American actress Q’orianka Kilcher portrayed the naturally gifted performer who came from indigenous people that were known for the music and stories told within their tribe. Fisher would take the stage name “Te Ata”, honoring her heritage during her career that lasted for over six decades. The film vividly charts her journey beginning in college, as a traveling stage performer, eventually performing for dignitaries both stateside and across the globe during her career. After its release, the film did win its share of accolades including Best Director honors at the 2016 American Indian Movie Awards, as well as Audience Choice awards at both the Heartland International and Orlando Film Festivals, respectively.

This inspiring short documentary from 2019 features the real-life story of Lorena Ramirez of the Tarahumara, or self-called Rarámuri. These indigenous people are known for being naturally gifted at long-distance running thanks to living within the mountain ranges of Urique, Chihuahua, in Mexico. Because of the geographical features of that region, basic transportation there is very often achieved on foot. The audience is quickly shown how every day involves traversing on foot, making running a marathon like second nature to Lorena. She runs every race dressed in her indigenous cultural attire of skirts and sandals, winning marathons rather easily while gaining popularity with every stride. For presenting such a remarkable tale, the film won Best Short Documentary honors at the 2020 Mexico Ariel Awards.

Produced in 2018 and set in the Canadian hamlet of Kugluktuk, Nunavut, this film, based on a true story, focuses on a very real social epidemic that’s severely affecting the lives of the local youth. With hardly any resources or options, a lacrosse team comprised of the area’s Inuit high school students was formed in an attempt to relieve tensions.

The plot manages to flow through several dark days in a striking fashion that the audience just cannot ignore. But for all of its drama and emotions, viewers ultimately do see some signs of hope. It’s definitely a remarkable production, shooting on-location in the actual region in which the film is set and casting young actors who are from that same area. The finished product earned several award nominations and even won director Miranda de Pencier the Directors Guild of Canada award for Best Direction in a Feature Film in 2018.

This historical drama was based on the life and times of the real Montford T. Johnson of the Chickasaw Nation – Native Americans who originated mainly in the southeastern portion of the United States. Johnson’s story takes place in what is now Oklahoma, as he went from the all-too-common hardships of life as an indigenous man in the United States to building a widely-respected ranching empire along the historic Chisolm Trail of the late 19th century.

The movie stars well-known actors Dermot Mulroney and Tommy Flanagan, along with Martin Sensmeier as the titular character. However, apart from the cast, the stunning visuals of the landscape, and authentic production design, the most interesting facet of this production was that real-life descendants of Johnson appeared as background extras.