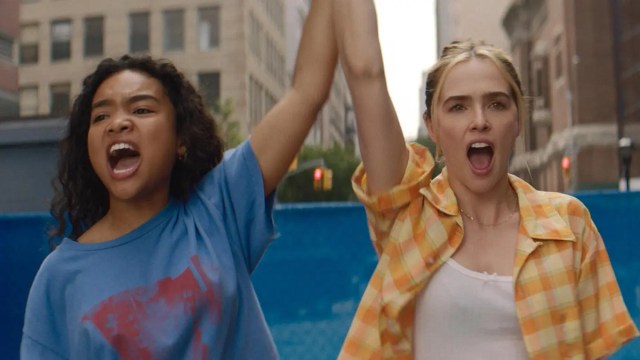 The Not Okay film comes out Friday. It is a dark look at social media culture, notes in its marketing it features an unlikable female lead and now, director Quinn Shephard says this statement is in an opening warning too, and came from test audiences.

The 27-year-old reveals the fact in an article published by IndieWire today. In the piece she says this is something she does not understand as there are several movies with unlikable male leads, but that it was a consistent comment from those who saw the film.

“The content warning was borne out of, to be honest, our test screenings. We un-ironically and consistently got responses from — I’m not going to say what demographic, but you might be able to guess — people who were quite literally like, ‘why would someone make a movie with an unlikable woman?’ It’s something I’ve repeatedly heard, and a lot of my other writer friends have as well. If you portray flawed women or women who reflect societal flaws, you get notes like, ‘I literally don’t understand why you tell a story about this character.’”

In the piece set to debut on Hulu, a Danni Sanders lies about going to a retreat in Paris and ultimately pretends like she was there in the middle of a terrorist attack in order to go viral. Shephard adds she hopes people see a bit of themselves in the character and, ultimately, believes that films about people who do not make good choices can have a point and help people be better people after watching.

“Telling really sanitized stories about people without flaws, who does that help? Because most people won’t see themselves in that. Danni is somebody who a lot of people should see themselves in, especially young white women who are on the internet all the time. She should poke at something in you that you think, ‘how can I be less of a Danni Sanders?'”

Shephard has no other projects on deck as of this story being filed. She has previously appeared in work like Blame and on television had popped up in shows like Bull, God Friended Me, and Hostages from 2013-14 on CBS as Morgan Sanders.