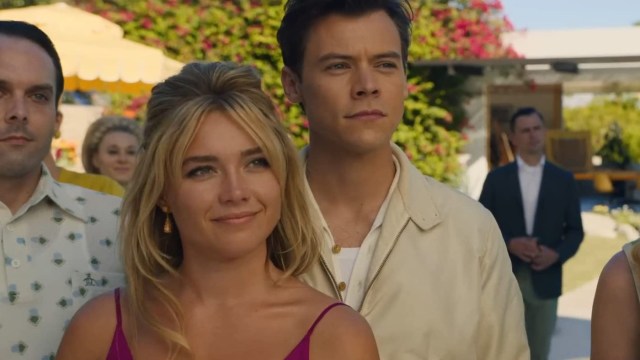 The Olivia Wilde-directed Don’t Worry Darling has stirred up quite a bit of attention, what with its star-studded cast — Florence Pugh, Harry Styles, Chris Pine, Gemma Chan, Kiki Layne, Nick Kroll, and Sydney Chandler — and of course, its super mysterious storyline that will be setting viewers loose in a Matrix-like paradise. But its popularity has also been affected by some gossip, the primary being the rumor that Styles’ paycheck as the male lead was more than what Pugh received.

This has understandably raised many eyebrows as even though Styles is the male lead, Pugh will be seen playing the role of Alice, the main protagonist around whom the plot of the film will revolve. But as they say, don’t believe everything you hear.

According to Olivia Wilde, these speculations are nothing but baseless rumors. In a recent chat with Variety, the director acknowledged that while she is aware that her upcoming film is a hot topic of many debates at the moment, she mostly doesn’t pay attention to what people are specifically speculating about. But she couldn’t overlook this particular piece of gossip around a “non-existent pay disparity” in her film’s making.

“There has been a lot out there that I largely don’t pay attention to. But the absurdity of invented clickbait and subsequent reaction regarding a nonexistent pay disparity between our lead and supporting actors really upset me. I’m a woman who has been in this business for over 20 years, and it’s something that I have fought for myself and others, especially being a director. There is absolutely no validity to those claims.”

This is not the only rumor Wilde has explained as she gears up to promote her upcoming film — her second directorial feature, to be precise. Elsewhere in the interview, she shed light on the whole drama around Shia LeBeouf being fired from Don’t Worry Darling. At the time, Warner Bros. claimed the decision was made due to a scheduling conflict, but Wilde has finally clarified that she took the step because the actor brought a certain “combative energy” to the sets of the film that disrupted her efforts to create “a safe, trusting environment” for everyone involved.

Initially, LeBeouf was cast to play the male lead opposite Pugh, but after Wilde and Warner Bros. removed him from the film, Styles came on board. But as revealed by Wilde, the singer-actor was always her first choice and the American Honey star was only cast because of Styles’ unavailability prior to rescheduling his tour amid the pandemic.