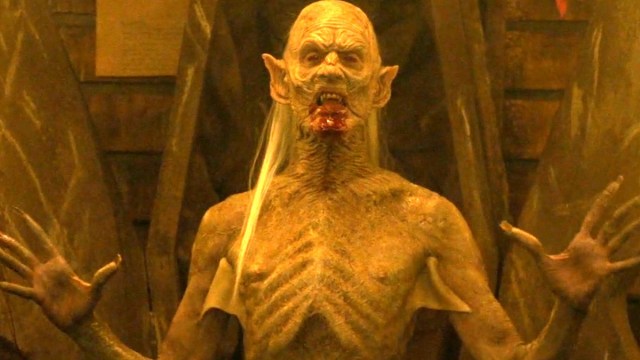 When it comes to naming the most iconic and beloved contributors the horror genre has ever seen, the list tends to throw up the same names over and over again, most of whom are filmmakers or notable stars. While the likes of Wes Craven, George A. Romero, John Carpenter, Jamie Lee Curtis, Boris Karloff, Robert Englund, Bruce Campbell, Stephen King, Christopher Lee, Rick Baker, and the rest of the usual suspects definitely deserve to be up there – it’s about time people made room for Doug Jones.

If you’ve watched a scary story, a far-flung fantasy, or a mind-bending sci-fi project at any stage over the last three decades and change, then there’s a distinct possibility you’ve seen the actor at least a handful of times, if not many more. Of course, he also happens to be buried under a mountain of prosthetics for the majority of his screentime, but hardcore horror supporters are refusing to let Jones’ efforts go unheralded anymore.

Among Jones’ credits include the creepily thin clown from Batman Returns, Hellboy‘s Abe Sapien, Hocus Pocus favorite Billy Butcherson, The Faun and The Pale Man in Pan’s Labyrinth, the motion capture for the Silver Surfer’s one and only live-action appearance so far, the aquatic creature in Oscar winner The Shape of Water, cult favorite alien invasion show Falling Skies‘ Cochise, The Strain‘s head vampire The Ancient, the Arrowverse’s Deathbolt, and dozens upon dozens more.

When it comes to striking terror into the hearts of audiences everywhere while holding a reputation offscreen for being one of the nicest people in the industry, there really is nobody else like Doug Jones, and it’s about time the world embraced that fact.