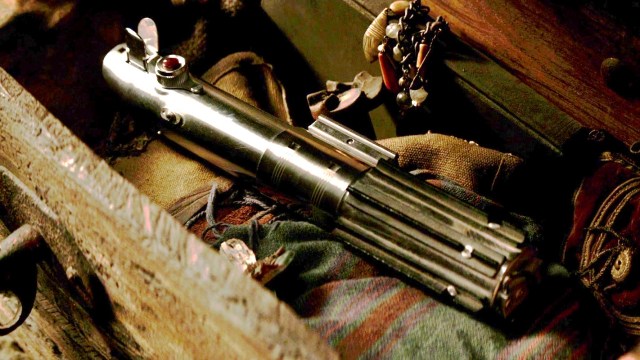 We’re now five years on from Star Wars: The Last Jedi, and much of the explosive fan anger around the movie has dissipated. A lot of that is down to it looking a lot better in comparison to the dreadful The Rise of Skywalker, as with the benefit of hindsight many now appreciated what Rian Johnson was trying to do, even if they don’t agree with the way he did it.

One of the main sticking points to this day is Luke Skywalker’s arc. In The Last Jedi, we meet him as a bitter and depressed hermit who’s determined to abandon the Jedi teachings and won’t involve himself in the struggle against the First Order. That post-Return of the Jedi change in his personality can be seen right off the bat when Rey hands him Anakin’s blue lightsaber and this happens:

So, how did the committed Star Wars fans react to one of the most sacred artifacts in the franchise getting tossed away like a piece of junk?

For many this sums it up:

A feeling of anxiousness begins:

Perhaps this was a teeny bit aggressive toward fans from Johnson:

It’s arguable that uneasiness was the intended reaction, though that doesn’t make it any more fun:

Maybe a nod to Luke laying down his weapon in Return of the Jedi would have worked better:

We’re almost entirely on board with Rian Johnson’s critique of Star Wars in The Last Jedi, and we can see why he’s kicking back against stories that center on fetishized sacred props from the 1970s rather than compelling stories and new characters. Even so, if you wanted a way to instantly infuriate diehard Star Wars fans, you’d be hard-pressed to do better than this scene.