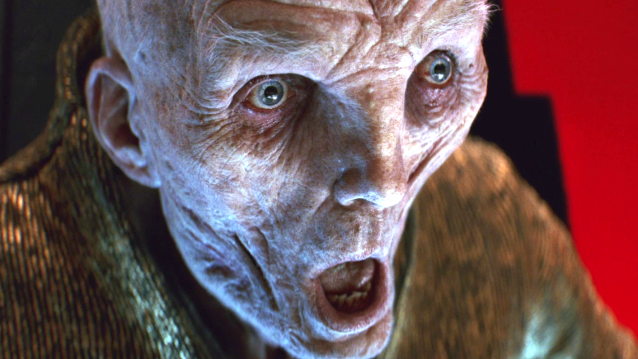 We’re now five years on from Star Wars: The Last Jedi but it’s still reliably generating controversy. Many fans are still furious about the way it deconstructed traditional Star Wars elements, the perceived “disrespectful” treatment of Luke Skywalker, the mere presence of Laura Dern’s Admiral Holdo, and the way it efficiently resolved the unnecessary puzzle boxes established in The Force Awakens.

One of the biggest mysteries concerned the sinister Supreme Leader Snoke. In the period between The Force Awakens and The Last Jedi, fans theorized that he could secretly be any number of unlikely characters. A resurrected Grand Moff Tarkin? A corrupted Mace Windu out for revenge? Could he even be… Mon Mothma?!

Rian Johnson proceeded to make the smart decision that a character who’s essentially a worse version of the Emperor wasn’t needed and killed him off. Now fans are comparing their reactions to that shocking death scene:

The Rise of Skywalker really should have focused on Kylo Ren taking his role as Supreme Leader:

Many agree that this twist could have worked if the next film had built upon it:

We still can’t believe Disney and Lucasfilm didn’t figure out the story in advance:

And all this potential being ignored in favor of just bringing Palpatine back still stings:

And, let’s face it, this is a rare Star Wars moment where you genuinely had no idea what would happen next:

We’re still sad that Disney and Lucasfilm fumbled The Rise of Skywalker so badly, as even if you have problems with The Last Jedi it leaves the story in a very interesting place for the finale. Kylo Ren is in charge of the First Order, the Resistance is down to just a few ships, and they can no longer rely on Luke Skywalker flying in to save the day. Instead, we got ‘somehow Palpatine returned’.

Let’s hope the newly announced sequel can turn things around.