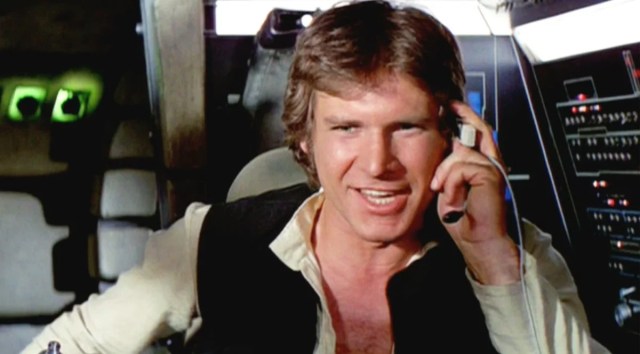 Han Solo‘s opinion on the Force was neatly summarized with his famous A New Hope quote: “Hokey religions and ancient weapons are no match for a good blaster at your side, kid.”

Over the years, his position softened somewhat after seeing Luke in action, but Han would keep that blaster strapped to his hip until his tragic death in The Force Awakens.

But, could Han have secretly been Force Sensitive all along? At first glance the idea looks ridiculous, but a thread on r/StarWars makes a surprisingly good case.

The biggest evidence is his consistent good luck: in The Force Awakens he shoots a Stormtrooper behind him that he couldn’t possibly have known was there, he’s constantly getting “feelings” about the future, was one of the few non-Jedi characters to ever wield a lightsaber, and consistently beat the odds when piloting.

The response from Star Wars fans is that Han probably was Force-sensitive to some degree, though he could only unconsciously sense it, rather than manipulate and control it like a Jedi. After all, the Force flows through all things, even the most cynical smugglers in the galaxy, so what Han considers “luck” is really the effects of the Force.

It’s also noted that it was once official Star Wars canon that Han had a connection to the Force. The 1990s CCG describes Han as a “freelance law-bender” and also says he’s “Force-attuned”.

So, it looks like Obi-Wan was right when he told a skeptical Han “in my experience there’s no such thing as luck”.