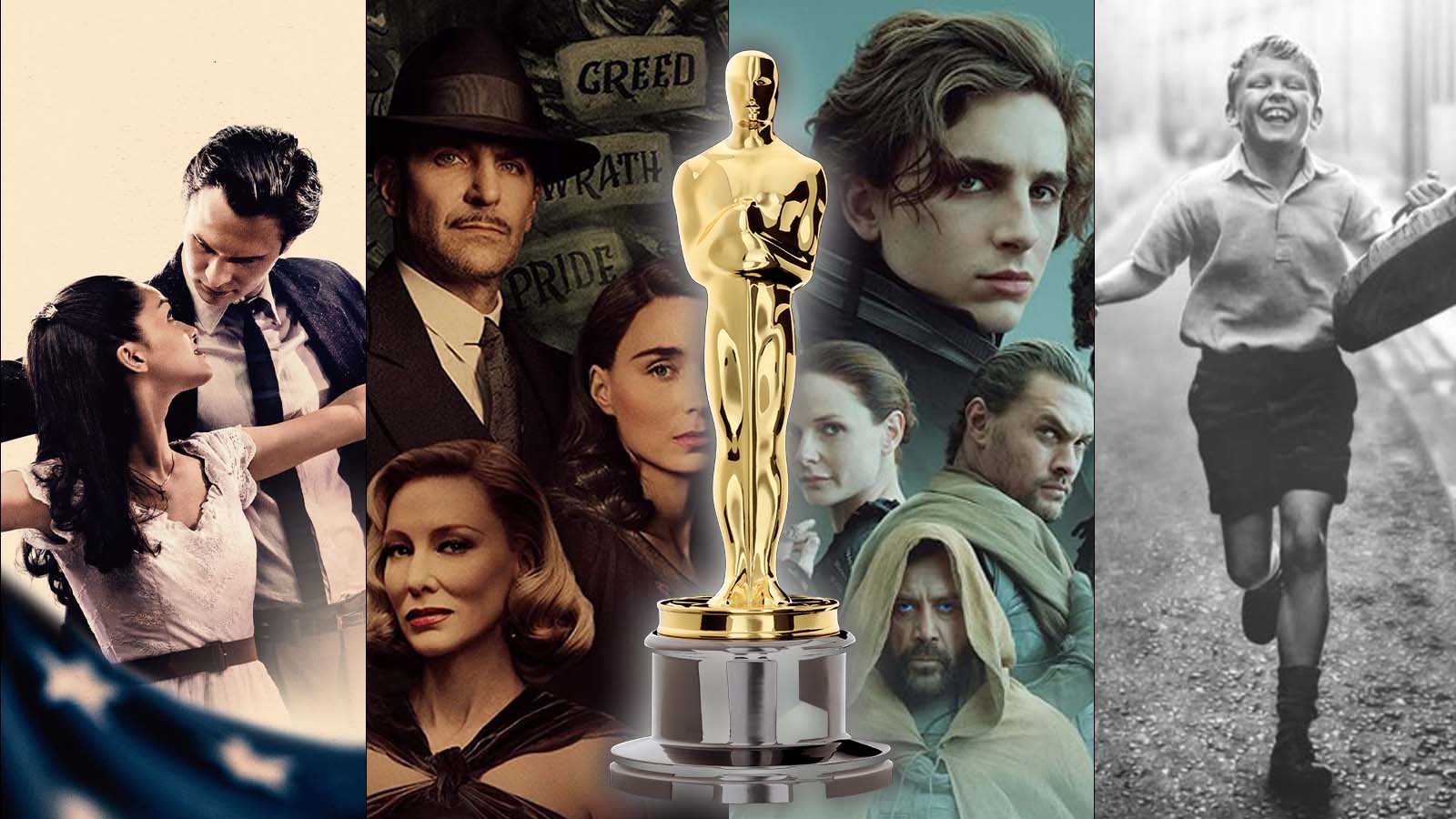 Ladies and gentlemen, the results are in.

While there were a few surprises along the way ⏤ can we talk about that Best Supporting Actor category? ⏤ the nominees for Best Picture are more or less exactly what we were expecting. 2021 was unsurprisingly another strange year for film due to the ongoing COVID-19 pandemic, but the year’s releases still managed to bring us everything from bold new dramas and quirky comedies to musical reinventions and timely social commentaries.

Now that the full list of nominees has been revealed, you have just under seven weeks to commence with your Oscar bingefest. Here’s where you can watch all of the Best Picture nominees ahead of the 94th Academy Awards ceremony on March 27.

Kenneth Branagh’s semi-autobiographical coming-of-age story has been hailed as a triumph by both critics and audiences alike. Centering around a young boy named Buddy as he navigates dramatic change in 1960s Northern Ireland, Belfast documents how the tumultuous Troubles ⏤ an actual 30-year conflict that didn’t end until 1998 ⏤ turns life upside down for Buddy and his working-class family. The film is Branagh’s most personal work to date, with Buddy essentially portraying his younger self. Starring Jamie Dornan, Caitriona Balfe, Judi Dench, Best Supporting Actor nominee Ciarán Hinds, and newcomer Jude Hill, Belfast was also nominated for seven Golden Globes, winning one for Branagh’s screenplay.

Belfast is still playing in movie theaters and is also available to rent on Amazon if you’d rather watch it from the comfort of your own home.

If you’re wondering why CODA’s title is in all caps, it’s because it stands for Child of Deaf Adults. The protagonist, Emilia Jones’ Ruby, is the only member of her family who can hear and thus comes to quite a crossroads when she has to decide between staying with her family or leaving them behind to pursue her love for singing at Berklee College of Music. CODA won big at the Sundance Film Festival, taking home the Grand Jury Prize and the Audience Award, and critics have praised it for being a pitch-perfect family drama and coming-of-age story.

CODA is an Apple Original and is thus currently available to stream on Apple TV Plus.

Adam McKay’s latest comedy isn’t based on true events but rather truly possible ones. It was also deemed a total bomb by most critics, which is why it has a current score of 56 percent on Rotten Tomatoes. Against all odds, Don’t Look Up still earned its place among the Best Picture nominees, likely thanks in large part to the dazzling lineup of A-list celebrities at its center. Leonardo DiCaprio and Jennifer Lawrence lead the stacked cast as astronomers who try to warn the rest of the world that a massive comet is hurtling toward the earth. The ensuing black comedy satirizes the plight our own planet faces should humanity not get its act together quickly.

Drive My Car has already made an impressive name for itself, having won a Golden Globe for Best Foreign Language Film and Best Screenplay at the 2021 Cannes Film Festival, where it was also nominated for the Palme d’Or. Based on Haruki Murakami’s short story of the same name, the Japanese film follows a recently widowed actor-director who tries to cope with the loss of both his wife and daughter while preparing to direct an Anton Chekhov play in Hiroshima. The film has been hailed as one of the best of 2021 and also received Oscar nominations for Best International Feature Film, Best Adapted Screenplay, and Best Director.

Drive My Car is still playing in movie theaters and is therefore not yet available to stream online.

Don’t Look Up isn’t the only 2021 film with a stacked cast. Dune is overflowing with star power as well, and coincidentally, Timothée Chalamet appears in both. In Dune, he plays Paul Atreides, a young man whose family is put in charge of a desert planet called Arrakis, aka Dune. Since the planet is home to a prized substance known as “spice,” Paul must defend it at all costs when a war breaks out over control of the commodity. Marvel fans will appreciate that the film also stars Zendaya, Dave Bautista, Josh Brolin, and Oscar Isaac, while DC fans will be thrilled that Aquaman himself, Jason Momoa, makes a memorable appearance.

Dune originally played in movie theaters and was available to stream on HBO Max, but it is currently only available to rent on platforms like YouTube and Amazon.

Venus and Serena Williams are no longer the only famous members of their family. Thanks to King Richard, the tennis titans’ father, Richard Williams, has been thrust into the spotlight, offering viewers a look at how he shaped his daughters’ futures. The biographical drama follows the title king as he coaches Venus and Serena to tennis greatness in Compton, California. Will Smith won a Golden Globe for Best Performance by an Actor in a Motion Picture – Drama for his committed portrayal of Richard and just received his third Oscar nomination for Best Actor today.

King Richard is still playing in theaters but is no longer available to stream on HBO Max. If you’d like to watch it from home, it’s also available to rent on Amazon.

Licorice Pizza is the coming-of-age love story you never knew you needed. Paul Thomas Anderson of There Will Be Blood fame wrote and directed this 1970s dramedy, which stars newcomers Alana Haim and Cooper Hoffman as the lovebirds at its center. Though the film was better received by critics than general audiences, Haim and Hoffman’s rapport lends the film an intimate charm that has been praised as much for its nostalgic leanings as its surreality. We’ll also never say no to something that co-stars Sean Penn, Bradley Cooper, and Maya Rudolph.

Where to watch: Prime Video

Licorice Pizza is still playing in movie theaters but will likely be available to stream online at some point this year.

Bradley Cooper and Cate Blanchett have much to celebrate today. In addition to Don’t Look Up and Licorice Pizza’s respective Best Picture nominations, their film Nightmare Alley has also received widespread recognition. Guillermo del Toro’s remake of the 1947 original finds Cooper playing manipulative carnie Stanton Carlisle to Blanchett’s mysterious psychiatrist Dr. Lilith Ritter. The film claims to have the most shocking ending in recent memory, but critics and fans remain split on whether the effort it takes to get there is worth the payoff. Still, the film’s all-star cast, which also includes Rooney Mara, Willem Dafoe, Toni Collette, and Richard Jenkins, should be enough to pique your interest, as should its additional nominations for Best Cinematography, Best Costume Design, and Best Production Design.

Where to watch: Apple TV+, Hulu

Nightmare Alley is currently available to stream on HBO Max.

The Power of the Dog

Based on the 1967 novel of the same name, The Power of the Dog is a psychological Western that stars Benedict Cumberbatch as Phil Burbank, a tough rancher who does not respond well when his brother brings a woman and her son home to live with them. As Phil relentlessly bullies the newcomers and old secrets are brought to light, The Power of the Dog becomes an intriguing character study and a timely examination of sexuality and masculinity. Cumberbatch has unsurprisingly been praised for his performance in the film, as have Kirsten Dunst, Kodi Smit-McPhee, and Jesse Plemons, all of whom were nominated in the major acting categories.

The Power of the Dog is available to stream on Netflix.

Steven Spielberg’s epic reimagining of Robert Wise and Jerome Robbins’ classic 1961 film and the Broadway musical on which it is based was a shoo-in for Oscar gold the second Spielberg became attached. The decisions he made alongside screenwriter Tony Kushner, namely casting an all-Latinx cast to play the Puerto Rican Sharks and giving the central characters more layered backstories than the source material, add an extra dimension to this West Side Story that the original did not possess. The result is a triumphant retelling that breathes timely new life into a tale that is perhaps more relevant now than when it first hit stages and screens.

Disney has just announced that Spielberg’s West Side will be arriving on Disney Plus on March 2, 2022. If you can’t wait that long to see Oscar nominee Ariana DeBose’s fearless new portrayal of Anita, you can catch the original film starring Natalie Wood and Richard Beymer on HBO Max.

Which of these films will take home the coveted Oscar gold? We’ll find out when the 94th Annual Academy Awards air on ABC this March 27.